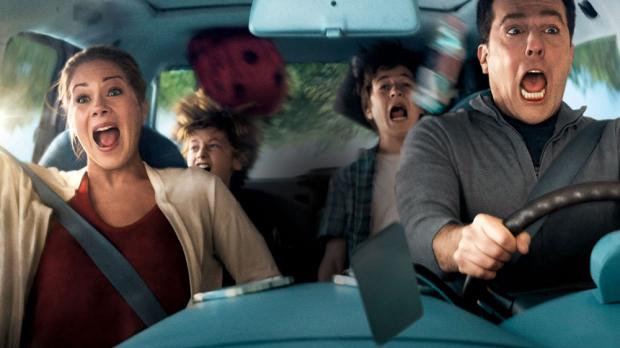 The New York Times offered a useful little feature this week about the current release Vacation. It was a brief taxonomy of the possible subcategories into which this extension of the 1980s National Lampoon’s Vacation franchise might fit. This is, it turns out, no easy-peasy, flick-of-the-wrist choice. Very serious consideration, by a number of New Line studio’s sage marketing minds, must have been devoted to the question. There are considerable stakes entailed in such decisions. The higher executive-judgment faculties in Hollywood must weigh whether a new movie that revisits an older one should be sold to consumers as, for example, a remake or as a sequel. The public should be provided the appropriate advisory.

As the Times piece clarifies, the possibilities range from “reset” to “reimagining.” Vacation’s co-writer-directors John Francis Daley and Jonathan M. Goldstein seem to have settled on “reboot.” What they adamantly rejected is “remake.” They weren’t trying to “replicate or do over what Chevy Chase did in 1983,” Goldstein told the Times. Chase was the star of the three National Lampoon’s Vacation movies, and he’s been wedged into a guest-star shot late in the new one.

Strictly speaking, one might sympathize with the filmmaker’s reluctance to have their picture confused with the old ones, which don’t constitute a high-water mark in popular art. Each of them worked out of the simple premise of a doofus male parent and husband who is inspired to take the family on a trip or to stage a home holiday celebration, with drearily disastrous consequences. They were all written by the late John Hughes, the widely touted master of the poignant youth comedy (Sixteen Candles, e.g.). When people reminisce about Hughes’s mastery, they rarely mention his work on the Vacation films. Even if Hollywood’s aversion to originality is accounted for, it’s a bit of a mystery why anyone would want to resurrect this material. Has the industry’s dedication to recycling become desperate?

Let’s get something out of the way: Vacation (a particularly insipid title that seems to evidence compromise) is a terrible movie. Its setup and development are mechanical and barebones. Rusty Griswold (Ed Helms), the grown-up son of Chase’s old character, decides to take the wife and kids on a cross-country motor trip to a California theme park to induce the family out of their joint rut and spark natural bonding. Predictably, they meet with a series of disasters, most of which center on graphic sexual misadventures, irruptions of out-of-control bodily functions, and/or potty humor. The picture’s repetitiously episodic smuttiness, gross-out exertions, and vapid slapstick are threaded through with a smarmy sentimentality about family values, which amounts to casual cynicism.

Daley and Goldstein have brought no real narrative skill to their work; Vacation is just a series of badly staged scenes of personal calamities, and their dialogue relies on dimwitticisms that seem to be only partly intentional. The biggest tension in the movie may be from the prolonged wait for Chase’s appearance, and that’s handled even more flatly and clumsily than what came before.

It should be noted that one of the larger auditoriums in the local multiplex where Vacation was previewed was almost filled that night, and that there was a lot of laughter. Why all those people showed up is another hard-to-answer question; most of them looked too young to remember the originals. Perhaps trailers on TV and the web attracted them. Trailers are now big business and fortunes are being made by independent producers of them. Also, there are different kinds of laughter and what I heard seemed somewhat forced or reflexive to me, without much genuine hilarity.

Another question did occur to me, as it has before: If we’ve all become so mature, liberated, and unselfconscious about sexual matters, why do movies with this kind of regressive grubbiness and junior-high-school-boy bawdiness so often produce such an approving response? It’s that sort of response the filmmakers are counting on, but I wonder if they’ve miscalculated this time. It’s not this department’s usual office to estimate financial returns, but I’ll hazard a guess that Vacation, despite its modest cost, won’t be cleaning up.

Of course, there is H. L. Mencken’s famous assertion about the linkage between underestimating the American public’s taste and profiting handsomely.