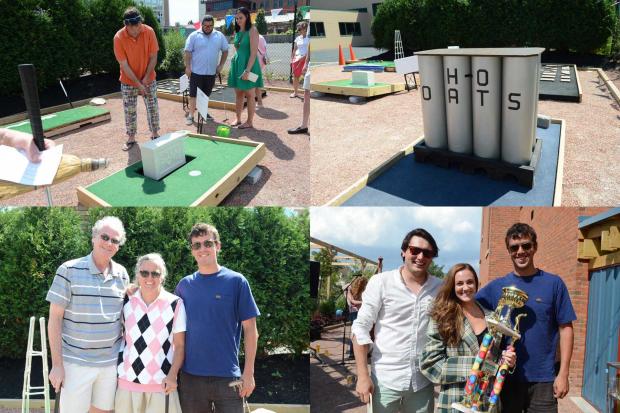 PUBLIC and Hydraulic Hearth held their premier Invitational Golf Tournament, a mini-golf tourney, on Sunday, July 26 at Larkin Links, the city’s nouveau “art/nano-sized golf course.” Located near the epicenter of Larkin Square, home of popular Food Truck Tuesdays, the course of nine “artisan-designed” holes is free and open to the public. There are also two bonus holes.

Creatives from Buffalo designed the holes and hats off to the miniature HO Oats grain elevator designed by White Bicycle design studio, a neighboring business on Seneca Street. It should be noted that the course’s most difficult hole, “Half-Pipe,” was desinged by Hydraulic Hearth manager Harry Zemsky and Keuka Specialty Woodworking. It’s a heart-breaker.

Twenty-four foursomes began teeing off at 1:00 p.m. and the last, led by Leslie Zemsky, was at 2:55. During the tourney there was much bottle-necking, rubber-necking (during putts involving jaw-dropping, tactical maneuvers) and some good-natured playing-through.

At the nineteenth hole – Hydraulic Hearth’s biergarten – Pine Fever performed, Frank food truck sold hotdogs before and after the award ceremony held at 4:00. The outdoor bar did brisk business: a certain cocktail made of gin and beer might not be recommended.

Creative golf attire was encouraged and most came in their finest links-ready argyle, madras and summer dresses. This writer’s foursome, The Lilly Pulitzers (Annie Deck Miller, Jana Eisenberg, Laura Kirkpatrick) were a bold-print vision. Geoff Kelly, PUBLIC editor-in-chief putted in patchwork madras pants. Unofficial Best Socks Award goes to T.J. McDermott who was part of the Cat Ayers foursome. “I was the weak link,” he says, adding that the course is “insanely difficult.”

Winning the large and loud green jacket was a beaming Nicole Biondi, who scored an all-event low of 23. The team low went to the Black and Blue team: Jessica Laks, Erin Murphy, Kevin Trevean, and John O’Connor with a combined score of 107.