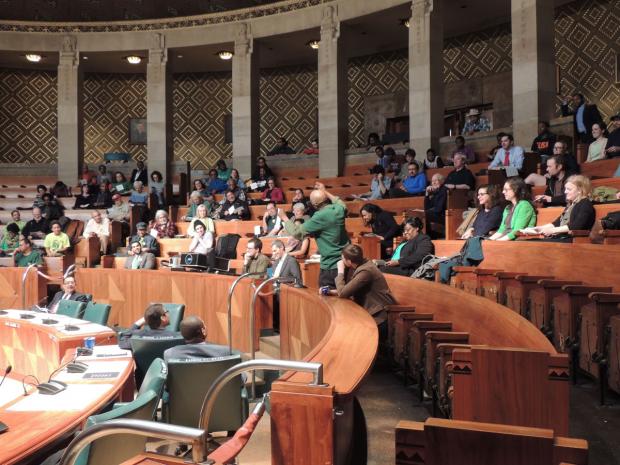 Participatory budgeting (PB) has been around since the 1990s in Brazil. The practice, however, first hit the United States in 2009 in a Chicago ward. It is a form of direct democracy that allows residents, not merely citizens, to decide how to spend a part of the public budget. More extensive than an hour-long public meeting, PB is a yearlong process. Residents gather at “general assemblies” and brainstorm improvements or projects they would like to see in their communities—anything from computers in libraries to benches outside of senior centers to parks.

During and after the assemblies a group of residents volunteer to be budget delegates—who are responsible for figuring how (and which) ideas to turn into projects. Budget delegates do the bulk of the work, including (but not limited to): walking streets to assess potholes, visiting community centers, meeting with city agencies and departments, and crunching numbers in order to pare down ideas into feasible projects. Project expos are then held throughout the neighborhoods to give residents detailed information on the projects that will be on the ballots. Then voting happens. Voting sites are set up for about a week and can take place anywhere in the neighborhood. In New York City, pop-up voting booths were set up outside of McDonald’s and cell-phone stores. In Boston, youth were allowed to vote as they were getting on the Metro after school.

The beauty of the PB process is that it goes beyond “public input” and generating ideas to actual decision-making by residents. Residents constitute anyone who lives in the neighborhood and is of voting age decided on by the local steering committee of the PB process. In Boston, the process is entirely youth run; 12- to 25-year-olds get to decide on how to spend $1 million of the city’s capital budget. In Chicago and Vallejo, California, residents over the age of 16 can participate. Research conducted to evaluate the process has shown that PB is a great way to engage individuals who are English language learners; who are new to the country; who have never been civically involved in their local organizations; previously incarcerated individuals; and individuals who have given up on the electoral process altogether.

Unlike Representative Democracy—the system we currently have in place in which elected officials endeavor to speak on behalf of their constituents—Participatory Democracy is a step towards restoring the input of ordinary working people. The collective wisdom embodied in joint decision-making on the use of public funds cuts against the purchase of the process allowed by the Supreme Court’s 2010 Citizens United ruling. This trend must be strengthened and broadened. The Citizens United decision has resulted in the open buying of the political process by the 1% of our society. The growth of the organizations that are simply fronts for the wealthiest of Americans has eroded much of the democratic structure of the election system. Participatory budgeting levels the playing field by offering regular citizens a say in their communities.

Even more promising is data that shows that residents who participate and engage in the PB process are more likely to get involved in their community organizations and to vote in the next local election. Participatory budgeting can show residents that their voices matter and that they can make a difference and that democracy only works and is more enriched when everyone participates. In the coming months, the PB process in Buffalo, initiated by the Clean Air Coalition with support from the Buffalo Common Council, will flourish as more and more people begin to make their voices heard and feel like their voice will actually make a difference. The $150,000 awarded in this year’s budget will not make much of a dent but it is a great first step in showing City Hall that residents are more than capable of advocating for their communities beyond the required public meetings we are so accustomed to.

Richard Lipsitz is president of the WNYALF, AFL-CIO. Natasha Soto is community organizer with the Clean Air Coalition of WNY.