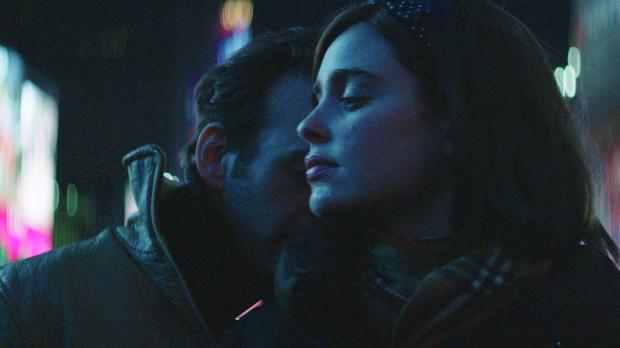 It’s no secret that drama and the cinema have separated, the former having moved on to television while the latter has given itself over to wooing the young with spectacle and cartoonish characters. But is the split irrevocable—is divorce inevitable?

I hope not, because despite the modern taste for long-form drama being binge-watched in our living rooms, there are still ways in which cinema is superior at presenting drama. This Canadian film, named the best Canadian feature at last year’s Toronto International Film Festival, is a good example.

Set mostly in Montreal during the snowy season, Felix and Meira charts the growth of a relationship between two disaffected people. Meira (Hadas Yaron) is a young wife and mother in the city’s Hasidic community. She is loved by her husband Shulem (Luzer Twersky), who tries to give her as much leeway as he can within the boundaries of his beliefs. But it’s getting difficult: Neighbors and families are starting to wonder why they only have one child, a three-year-old daughter, when “six, eight, even 14” are expected.

Were Meira not so restless, she would never have met Felix (Martin Dubreuil), who first sees her in a kosher pizzeria. (That’s Montreal for you.) Felix has just lost his father, who was rich but never connected with his son, though it’s not clear exactly whose fault that was.

Where this story goes is not entirely surprising, but what makes the film engaging is the route it takes to get there, one that leaves you feeling differently than you might have expected. Director Maxime Giroux realizes that our expectations of the story save him the trouble of having to spin it out. Instead, he focuses on unexpected details, largely in the environments where the characters interact (aside from Montreal, a portion is set in Brooklyn, where Meira has been sent for a punishment that instead amplifies her interest in the outside world.)

It’s this approach, visual over characters and dialogue, that doesn’t work as well on television, where the small screen is less able to hold our attention. Felix and Meira may be too slow for some, and lacking in character background, but its delicate presentation is a quality that is becoming increasingly rare.