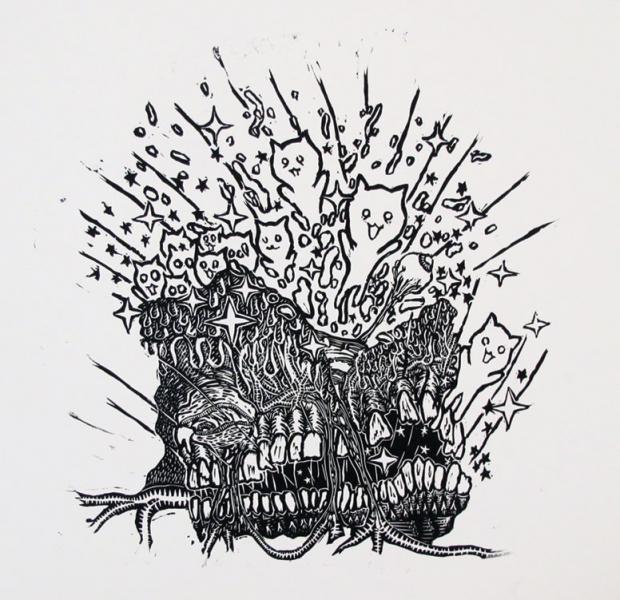 Among various and variegated books and other printed materials at the Western New York Book Arts Center members show, not a book nor printed material but nonetheless a story, Timothy Frerichs’s exquisite framed artwork—like a painting, but not a painting—called Icarus. Consisting of two disintegrating wing forms composed of milkweed seed pods and attached silky filament air transport apparatus that two minutes’ research on the internet revealed to be technically termed “coma,” Latin for “hair.” (But that I have always referred to by the term I still remember my older cousin—I was about five or six then, he would have been about nine—informing me was the correct name for those wonderful airborne floaters—referring to filament apparatus and seed pod together, though I don’t think at the time I would have even noticed the relatively tiny seed pod component—i.e., “money stealers.”)

A minimalist format art book by Alex Jun, consisting of a few construction paper pages or partial pages, fewer words and numbers, and a single cut-out repeated image of a boat—initially upright, then overturning, then overturned—commemorates the fiasco disaster of the South Korean ferry that sank and capsized on April 4, 2014. More than 300 of the approximately 500 passengers and crew died, including 250 students from one high school near Seoul.

Another current events art book about another sort of water disaster is by Amanda Maciuba. About global warming and its effects in terms of widespread flooding. A dozen or so pages, with images of rising waters and a Noah’s Ark type vessel. The text reads, “Building an ark…for the next five hundred year flood…every summer.”

The most elaborate book is by Deb Eck, called Women’s Work. Countless to-do lists and notes and notices of other work to accomplish—actual or implied—pasted on page after page. And copious evidence of sewing, of the pages into signatures, of the book title embroidered across the 10-inch or so spine in black thread running off unbroken to a spool and needle at the ready for the next sewing job. Never done.

The most enigmatic is by Elizabeth Switzer. A repurposed traditional book as fold book, with pages whitewashed over but sporadic lines left unwhitewashed and unobliterated, or copied over and re-pasted back in their original place. The result a skeleton of sorts of the original story.

Pamela Harris has a little necklace book of triangular design with leather cover and blank pages. Theresa Wyatt two books of different style and character but similar as to text, a poem about the Civil War battle of Gettysburg. One book consists of basically just the poem, the other intersperses poem and historical depictions presumably of the battle and aftermath. Emma Percy has a folded-hanky-sized book of faintly flower-patterned lavender hue fabric and embroidered text of gentle poetic images, “field of blooms…lunar glow…Summer light clear water.”
Book-associated items include a banner of about a dozen little fabric pillows digitally imprinted with images of actual sign-out stickers of the sort that used to be stickered on the inside back covers of library books, with actual names of patrons who signed out the books, by Susan Hoisington. Jane Austen’s Persuasion, Thoreau’s Walden, Twain’s Huckleberrry Finn. Another book-associated item with special reference to Jane Austen—a bar graph showing, chapter by chapter, frequencies of appearance of Elizabeth Bennett and Mister Darcy, alone and together—by Matthew Nagowski.

Posters with wisdom messages, such as one by Nicole Cooke quoting Mary Ann Rabmacher on the topic of courage, “Courage doesn’t always roar. Sometimes courage is the quiet voice at the end of the day saying, I will try again tomorrow.”

A poster by Thomas Knab—called Buffalo Teacher—of teacher rubber stamp imprints in an overall figure of a Buffalo. Stamp messages like “Good Job!” or “Please Correct.” A comical word and image poster by Kathy Kastan of an Athenian owl asking, “What?”

Other non-book artworks by Mark Lavatelli, Katherine Sehr, and Anne Muntges, with or without a books connection. Muntges’s piece is a screenprint of feminist books on a shelf.

The members show continues through August 21.