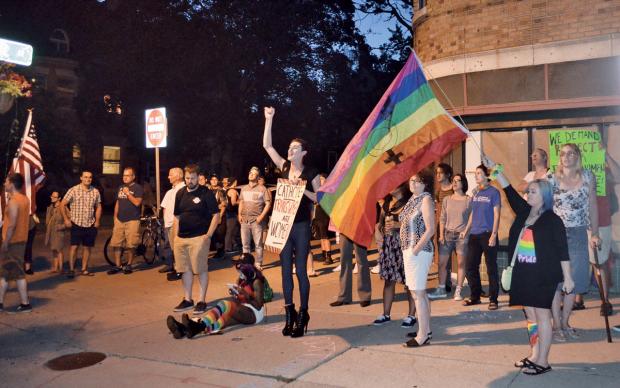 As a community, we seem to do a pretty good job of kidding ourselves.

When we bend the truth to suit our own purposes or to reflect a specific agenda, we often fail to consider the long-term ramifications. I used to do this all the time. As an alcoholic and drug addict in recovery for over a decade now, I spent a lot of my late teens and twenties devising ways of spinning scenarios that framed me and my intentions in a specific light.

Busted stealing? They owed me.

Fell out with a close friend? They turned on me.

Got fired? Management was homophobic.

When life handed me a bag of shit, I got busy figuring out how to make that look like the desired outcome, somehow glorifying myself along the way. My trials were designed to seem like hard knocks that were earning me some kind of imagined stature. By devising ways of repackaging my life events after the fact, I created the illusion that the awful things transpiring were somehow meaningful and important well beyond the mundane, ugly truth: I was a deluded fuck-up who needed help.

Slowly but surely, people backed away from my mess. It can take years for folks to catch on, but eventually a discernible pattern emerges, and when that happens, buddy, you’re on your own.

On a small, interpersonal level, the damage done with these little lies is reasonably well contained. It wreaks havoc on relationships and, over time, erodes any possibility of trust. Credibility goes out the window. But on a larger scale, lies can define history. All because we desperately wanted to deflect blame or couldn’t own the truth for whatever reason. Putting pretty bows on ugly events is nothing new in American culture, but I would hope for more from the LGBTQ throng. Then again, we’ve always seemed to enjoy stirring up drama.

Last winter I read journalist Stephen Jimenez’s The Book of Matt regarding the murder of Matthew Shepard. The book presents an alternative to the commonly accepted hate crime/panic defense hybrid that we’ve come to understand as the cause of the murder. Instead, Jimenez attempts to expose the case as a drug-fueled scenario, perpetrated by methamphetamine-addicts-turned-dealers who were caught up in a ripe and rapidly growing Midwestern market. Meth would eventually take the world by storm, hitting gay men rather hard over the next 15 years. But in the 1990s, the full effects of chronic use may not yet have been well understood.

That meth (much like crack cocaine) tends to inspire a hyper-sexual state in which the lines of one’s normally defined sexual preferences get blurred—something that could be frightening and even rage-inducing for an otherwise straight male who doesn’t understand what’s influencing his ‘choices’—is at the heart of Jimenez’s proposal. In it, Shepard knew his assailants well. At least one of them he knew intimately.

The book did not win a largely supportive gay audience, in no small part because it rewrites an important bit of our history. It takes an already ugly tale and makes it even uglier, simultaneously draining the heartstring-tugging innocence right out of it. But it also makes sense, and there are too many people who were close to Shepard who are willing to talk about his drug use (and his then-growing interest in the business end of meth) to dismiss it as utter nonsense.

Police in Laramie, Wyoming have since blasted Jimenez for inaccurate reporting, but that’s hardly any reason to offer them the benefit of doubt. The police tell lies when it suits their needs, as we’ve all witnessed through the recent rash of high-profile brutality cases in the news. They repackage and reframe reality all the time. Curiously, Jimenez has not been sued, from what I can tell, which speaks volumes.

Gays have cloaked Shepard’s death in a great deal of meaning. To accept Jimenez’s account is to part with some of it, reducing the murder of Matthew Shepard to the mundane stuff of drug-addled, money-hungry youths running amok. There’s still a hate/panic element to the Jimenez scenario, but in it Shepard is nowhere near the above-suspicion, little-boy-lost character we’ve come to know. He is the face of methamphetamine tragedy, not the face of hate crime tragedy. It gives the case a completely different feel.

I don’t mean to imply that the murder of Matthew Shepard was in any way deserved if what Jimenez has suggested is true—not in the slightest. To my understanding, that’s not what Jimenez is saying, either. But when you think of all that’s been made of the case, what it stands for in our culture, the ensuing activism, legislation, and how it has shaped our understanding of what constitutes hate-motivated violence, the ramifications of such a proposal are staggering. And when you take in the information as Jimenez logically lays it out, there’s nothing far-fetched about it. Nothing at all.

When news broke recently surrounding the issue of gender fluidity and use of the bathroom at Allentown’s Cathode Ray, The Book of Matt came to mind—and with it, resounding echoes of our ability to kid ourselves. A 25-year-old, trans-identified female claims that she was singled out for using the ladies restroom at the longstanding local bar, an establishment where she’s been let to do so without argument for years. She maintains that security informed her she “wasn’t dressed female enough” to be using the ladies room on this particular occasion.

But she wasn’t put together in any dramatically different way than normal. The owner of the bar hasn’t recently changed and the security guard remains the same. All the characters in this play have known each other for quite some time. So what’s different?

Well, for one, the issues of gender and transition are in the news. It’s the next big pile of debates on our legislative plate. The trans community now has our collective ear like never before.

But there are numerous devils in the details that render this situation farcical. Representatives from the bar allege there was a second person in the restroom, someone that they deemed to be male. The jury is out as to whether this is a clear violation of law, but it’s standard policy for restrooms that are specifically gender-allocated that simultaneous co-ed occupation isn’t permitted. Some cities, such as Raleigh, North Carolina, have specific ordinances to further clarify this.

This is the grounds upon which the bar maintains it asked the pair to leave—two people, two different genders, same restroom. From that angle, it doesn’t matter whether they were in the stall together or whatever else may or may not have been going on. That, right there, is enough to ask them to leave. Period.

Both patrons were eventually escorted from the bar, but not before insisting that the second party wasn’t male. Rather, they said, it was someone who identifies as gender neutral.

Not really. Because it has a hair-splitting air of desperation to it. And it doesn’t solve the problem. Actually, it leaves us with another puzzling scenario: If we were dealing with a trans man using the men’s room, the gender-neutral party still wouldn’t be in the right place. So, should we then assume that gender-neutral-identified people aren’t to use bathrooms in public establishments? Hogwash.

A protest rally ensued the following Monday night. Apologies were demanded, to no avail. Accusations of discrimination were made. Longstanding exclusionary behaviors were alleged. And yet none of that makes any sense. Why? Because we are being asked to swallow a repackaged, reframed version of events.

Bar owners aren’t interested in socio-political issues—not above and beyond their bottom line, anyway. They’re interested in staying open, making money, keeping the state liquor board at bay, and making their honest, paying customers want to keep coming back. Yes, they may occasionally align themselves with relevant causes, but this is far from the primary list of objectives. So, the incident begs the question: Why would Cathode Ray owner John Little choose this particularly sensitive moment in time to strike an unflattering pose that will alienate customers? Because, as has been proposed by some, of a deep-seated hate and ongoing pattern of discrimination? Not likely.

Mind you, I got bounced from bars in the 1990s. And usually it was because I was up to something of questionable legality. There were plenty of times when I either got warned by a bouncer or flat-out asked to leave because I was doing drugs in the bathroom or fooling around with another customer, or both. Unlike so many other scenarios I found myself in during those years, these weren’t incidents that I felt the need to repackage or spin to glorify my intentions. Like a rock star getting fined for destroying a hotel room, getting busted in the john doing lines and giving head was fine with me. I could live with that.

But that was another city in another time. A bigger city in a different state with many other LGBT establishments around. Here in Buffalo, they run a tighter ship and, I’m told, the liquor board is looking for excuses to hassle gay establishments. Which presents the other issue: We’re never going to know exactly what those two were doing in the restroom because it will bring unwanted attention to the bar and could result in further hassle for Little’s business. Call it damage control, but maybe that’s why nobody can seem to make up their mind about who was found where and doing what.

Trying to exploit a preventive measure taken to avoid legal scrutiny and repackaging it as discrimination cheapens and demeans the very real plight of discriminated people everywhere. It also insults the intelligence of those onlookers you might someday look to for support. Strength and integrity are derived by being upfront and unapologetic about who you are, but also by maintaining an admirable level of honesty and not shitting where you eat. Own your behavior—as much as you can—and learn from your mistakes. Without the lies and repackaging, life is so much easier to live. That is, for those of us that don’t thrive on drama.

It makes the most logical sense that the pair of bounced customers at Cathode Ray got caught doing something illegal and were told to leave as a result—nothing more, nothing less. I would urge you to draw your own conclusions but also to be careful. Our tendency is to want to hang greater meaning on these events. People will use them to glorify their own passions and particulars—to reframe them according to their own designs, whatever those may be. We’ve all done it at one time or another. The truth can be so boring. But at the end of the day, it’s all we really have.