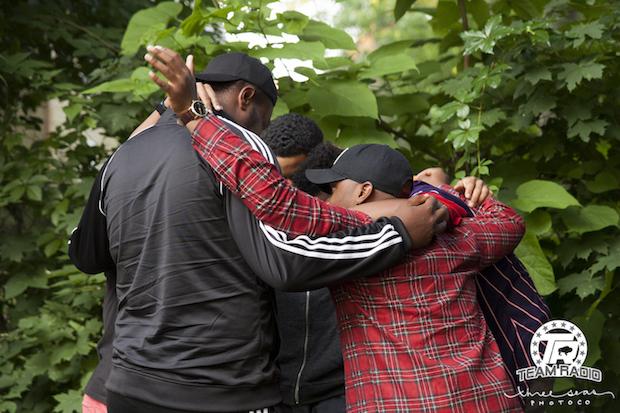 After booking the mysterious MPC master Araabmuzik for a concert at the Town Ballroom on August 7, Buffalo rapper Chae Hawk wants to make sure the right people are in the crowd. That’s why he’s sending out a personal invitation to Bills owner Kim Pegula, who Hawk describes as “very trill.” He’s also made a few other preperations for this show, namely shooting a video with his friends Nameless and Ali Critelli for their new single “Good Days.” The video is for the new collaborative single with Nameless, the follow up to their last release, “Nickle City Bounce.” Today, we talked to Hawk about his new video and upcoming show with Araabmuzik. View the official debut of “Good Days” below.

Tell me a little about the artists who you collaborated with on this video.
Nameless is a trio out of Niagara Falls that I discovered in 2011 and have been working to develop ever since. They are they my favorite hip hop/rap group, besides Wu-Tang and Mobb Deep period! I’m not just saying that cause they with the team, but I will only invest my time in things I am truly passionate about and believe in! Ali Critelli and I go way back to like 2005, just being on the Buffalo music scene. I feel she’s my female counterpart locally. Not just as an artist but as a person. She is sweet and talented and I care about her. She has added her voice to multiple projects of mine, so I wanted to give her a stronger role and position with the team on “Good Days.”

What inspired “Good Days”? Where did the production come from?
“Good Days” was inspired from the beat itself. It was produced by Bless, who is the first to spit on the track. His talent is honest and raw just like the group, so with this track I wanted people to get to know the softer side of them. It’s the follow up to our small “Nickel City Bounce.” With that you have a Buffalo winter and with this you have a Buffalo Summer.

What was it like shooting the video for this track?
It was a two day shoot. The day started off rainy and dark which was not a good look, but once we got to the car wash the heavens smiled down on us and shined bright on our mission. My dude David Anthony Kafer was home from LA shooting his brilliant portrait project so we killed two birds with a big stone and he let us shine while he utilized his flash for our hook essence, which made the video. Thanks David! Day two we planned a BBQ and invited our truest supporters for grub and drinks and just kicked it. The whole essence of the video is just that: good days. Also, this was my third time utilizing the young Austin Martinelli as cinematographer, so our flow as a collaboration is getting easier; communication getting better.

You’ve got a big show with Araabmuzik on August 7. What are you thinking about with that coming up?
Yes I do! Huge fan and honored to share the stage with him for real. He was on my producer wish list for Dance Party for the Heavy Hearted going back to 2011. This show will be a special one. We have teamed up again with Compeer, a company who helps fight mental health through the power of friendship. They turn 30 and they reached out to my company TeamRadio.net and I to help raise awareness and attract more male mentors to their organization. Working closely with them has been special because it has allowed me to understand my core values as well as my company’s; appreciating my relationships and friendships even more. So my performance will cater to just that, with special guests and a special presentation from me to those who attend. I’ve been through a lot since last year’s TEAMWORK; losing Craig Reynolds, Lance Diamond, and close friend Michael Perry Jr. has made a huge impact on me—allowing me to grow and appreciate this life even more. This will be the platform to speak my mind 100% while performing brand new material as well as share the stage with my truests! DJ Heat and Nameless, as well as my team, then kick back and watch one of my favorite do it live! ARAABMUZIK! This will be the ONE!

If you could have anyone in Buffalo see your performance who would it be?
Most definitely Kim Pegula. For her courageousness, resilience, and cool factor; plus my company teammate Connor has met her briefly at a BIlls game and said she is very trill. Also, I would take my dude Chad Michael Murray off daddy duty and fly him out to peep the show. He has been a true mentor and friend to me from day one and this show would be my thank you to him. This show is a thank you to those who have been rocking with TEAM RADIO and ChaeHawk.COM from the genesis. Special shout out to my right hand Casey Schultz. #TEAMWORK2015 LETS GO!