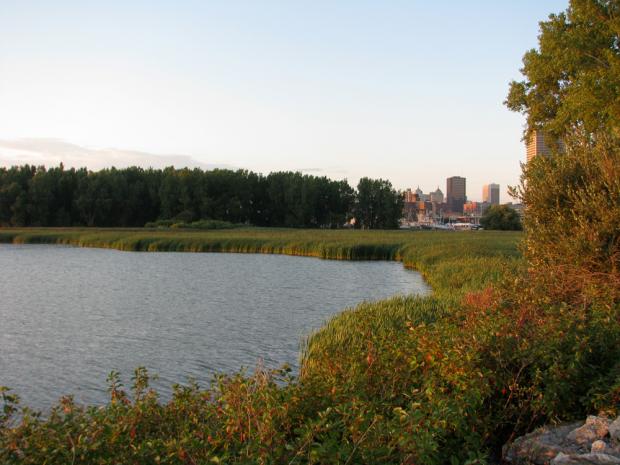 Some of those who back the 23-story apartment building recently approved by the Common Council for the Outer Harbor believe that it is a sign of the enterprise of a new, vigorous Buffalo. In fact, it is a step backward, a regression to the time when the city was so poor and development so rare that any building seemed better than none. In the New Buffalo, we need to ask if the building would help or harm the district for which it is proposed. No one would disagree that in many sections of the city a residential tower like the one at issue might provide an important anchor. But in other locations the tower would betray the distinct character of a district. Among these more fragile places, the Outer Harbor comes first.

We can approach the issue by asking why an astounding 30,000 people chose to ride the ferry last summer from Canalside to the Outer Harbor. Those people were not intent on examining the future home of a residential high-rise or to daydream of a three-level parking ramp. They came to enjoy, within half a mile of downtown Buffalo, a green alternative, a place nearby but very different, where one can ramble along the lake shore as one can ramble in no other part of the city. They came to visit a shore park in the making, with Tifft Nature Preserve at one end and Times Beach Nature Preserve at the other. The Old Buffalo would ignore this natural asset a few hundred yards from downtown, an asset that other cities can only dream of, and make the mistake of converting it into a mirror image of the city. But the New Buffalo will want to cherish its character and enhance it.

It isn’t hard to understand the motives of the developer of the tower—to cash in on the interest that is now being shown in the Outer Harbor—but the building itself will not enhance the experience for the 30,000 visitors. The few hundred people who may live in the tower may enjoy waking up in the morning with the lake outside their window, but for the 30,000 who come to enjoy the Outer Harbor the building will seriously degrade their experience. It will dominate the low profile of the landscape, constantly broadcasting its smug message that what matters in Buffalo is not the aesthetic needs of the many but the convenience of the few. And how soon will the residents, in their wish to protect their property and their privacy from passers-by, insist on restrictions that will make impossible the kind of openness to exploration that visitors now enjoy? In the Old Buffalo such a loss might be written off in the name of progress, but the New Buffalo will commit itself to larger notion of what progress means.

Building the tower on the Outer Harbor will not only be an aesthetic blunder, but a great practical blunder as well, for it would involve building on a natural buffer to the wind and water blowing in from the Lake. To ignore the exposure of a tower so sited, and erected on landfill, is to make a version of the mistake made on the eastern side of our state by building homes on a floodplain liable to be inundated when a storm drives up the Atlantic coast. The Old Buffalo might be willing, for the sake of short-term gain, to disregard this history of costly error, but not the New Buffalo we want to live in.

Carl Dennis is an emeritus professor of English at UB.