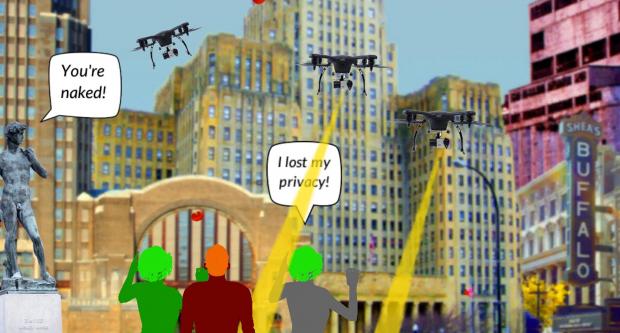 PJ Moskal's Invaders, on display as part of the Shape of a Pocket exhibit at Squeaky Wheel.

Shape of a Pocket

At Squeaky Wheel, the art of resistance

The current Squeaky Wheel exhibit is called Shape of a Pocket. The pocket referred to is a metaphorical “pocket of resistance” of the artists—and people of decency and good will everywhere—to Trump and his minions and their maleficent works and pomps. So art with a political resistance message. Though subtle sometimes. To the point of hard to decipher. Resistance message, or in some cases message period.

Sometimes to get it you have to read the companion brochure essay by curator Ekrem Serdar. He points out, for example, that many of the works are about body, which he calls “the last resort” of resistance. (I would have thought mind.) But at any rate a notable locus of oppression by the Trump people (not to mention by the people politely referred to as his “base”).

Among the body works, a video piece by Charlie Best and Jaz Palermo that harks back to Plato’s dialogue the Symposium, the argument therein by comic playwright Aristophanes that the male and female sexes were at some mythological past time period united in the same body, but then were somehow split apart, wherefore the fundamental purpose of the universal compulsive love force—Eros—is to reunite the parts that were once unduly separated. The supposed time period prior to the split is treated in the video as a Golden Age, another ancient—but alas also fictional—concept of the Greeks and everyone else. The work background vocal refrain: “There was harmony in all the land.”

And Kyla Kegler’s comical-serious video performance piece about body image consists of the artist doing arm contortions while anxiously reiterating the piece title question: Are My Arms Too Big? (They’re not.)

Another body piece—the message, political or otherwise, this time not so clear—is Morgan Arnett’s video of what seems like several minutes of the artist in a bathtub, head and face underwater, seeming to inhale and exhale.

Several resistance messages in the category Black Lives Matter. For example, W. Michelle Harris’s video work Can’t/Breathe Mirror. Including a video screen constantly shifting mosaic of hundreds or thousands of faces of black people, all of whom, according to the Serdar essay, “were murdered by the state,” and interactive feature that projects an indistinct further mosaic image of the observer—you—as part of the main mosaic. Plus little altar of electric vigil light candles lit in remembrance of the multitude of victims. Lots more victims than candles though, unfortunately.

And Dana McKnight’s thoroughly arcane Black Bloc. You need the Serdar essay for this one. A larger than life projected blurred image of a black person of uncertain gender mouthing words you can’t make out through what looks like a chin upwards half face mask, to background sound effects of spacey pings and clicks. What sounded like Morse Code—but I didn’t think that possible, or anyway likely—then was surprised to read in the essay that’s just what it is, Morse Code. A message in dots and dashes, in a reference to Solomon Brown, the first African-American employee of the Smithsonian Institution, who once worked with Samuel F.B. Morse. Serdar says the code message is “envisioned by the artist as a transmission from or to the future by a black matriarch.” The message content: “Take it back to the ways of the Geechee and the Sioux. Use the old ways of drum and smoke to confuse the enemy.”

Among other works, Elisa Peebles’ video paean to the old Fillmore-Leroy neighborhood and lament for the area former commercial hub, Central Park Plaza, currently and for some years past a chain-link-fenced-off mud and rubble urban island wasteland, slated for redevelopment by Ciminelli interests. But in whose lifetime, neighbors must wonder. Also, a video-programmed walk through Allentown by Kalpana Subramanian. An abridged version of the piece is accessible at the exhibit, but for the full experience, you have to get over to Allen Street and Irving Place, with laptop or smart phone, apparently. And exhibit-specific ad hoc WiFi network by Tony Yanick and Tal Messing, accessible only in the immediate vicinity of the exhibit—maybe within the confines of the 600 Main Street block—to feature information and commentary on the exhibit, to be added throughout the show, which runs through August 26.