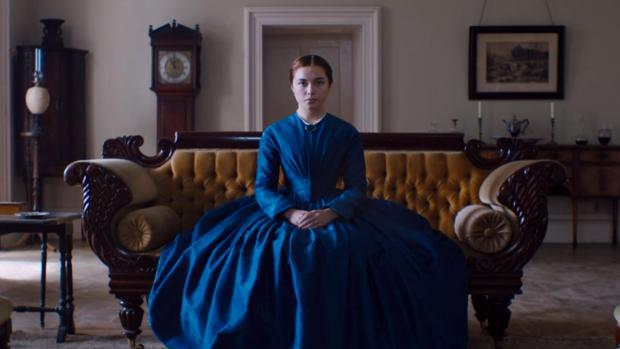 But don’t be expecting, say, a re-imagining of Shakespeare’s most infamous female character. This austere British drama was inspired by an 1865 novella, Lady Macbeth of Mtsensk, written at a time when there was a vogue in Russian fiction for borrowing names from Shakespeare. About the only thing the two Lady Ms have in common is that they are responsible for murders, at the time a shocking thing for a female character to do.

(You may recognize the title from its operatic adaptation by Dmitri Shostakovich, a production of which so offended Stalin that it all but led to the end of the composer’s career.)

As written by Alice Birch and directed by William Oldroyd, both film newcomers, Lady Macbeth strays even further from its antecedents. The setting is a rural estate in England in 1865. Young Katherine (Florence Pugh) is the new bride of Alexander (Paul Hilton), the middle-aged master of the estate.  We assume that the marriage was arranged; she seems to be hoping to make the best of it, but he clearly has no interest in her. The house desperately needs a woman’s touch, but Katherine is more a girl. Discouraged from even going outside by her cranky father-in-law, she is bored to tears.

When Alexander leaves to tend to a business problem, she falls into an affair with Sebastian (Cosmo Jarvis), a groomsman on the estate. She is not careful about hiding her actions, and when the opportunity arises she finds murder as easy a habit to fall into as adultery.

We may start out sympathizing with Katherine, but that doesn’t make her likeable, though that’s true of all the other characters as well. Is she, like another Shakespearean character, more sinn’d against than sinning? That may depend on your perspective. Suffice to say that her sins grow over time.

Birch and Oldroyd follow her like a specimen under a microscope, eschewing even the most basic of filmmaking tools that might render her sympathetic. They also tend to leave out a lot of details; it wasn’t until the end of the film that I remembered an early shot of her picking mushrooms and figured out what it meant. And the film has a racial component that I couldn’t begin to explain: though it is never commented on and to the best of my knowledge anachronistic, all of the characters aside from Katherine, her husband and father-in-law, are black or mixed race.

To say that the film left me cold isn’t a criticism, as that’s clearly the intent. And Florence Pugh, who was only 20 when the film was shot, holds your attention as firmly as all the great women of film noir were able to: whatever you think of her, you can’t look away from her.

A Ghost Story signals a vein of silliness right in the opening credits, when we learn that the production company that made this indie feature is called “Scared Sheetless.” That’s not a passing pun: the ghost on whom the film centers is portrayed by an actor wearing a sheet. With two eye-holes. Yes, just like you might have worn as a child.

Writer-director David Lowrey may be daring us to take him seriously. Then again, he may be advising us not to take him too seriously. The one thing he is certainly not trying to do, I should point out at the beginning, is scare us. This is not a scary movie, but rather an art film about love, loss and time.

The ghost returns to the house where his lover is so distraught that she—no, I’m not going to tell you. It would sound silly if I did, but the effect isn’t silly at all. Let’s just say that it involves a single long take (one of many in the film) that Mara hopefully didn’t have to perform more than once.

Time passes. She leaves; a new family moves in. More people come and go, including a bloviating partier (musician Will Oldham) who delivers the kind of rambling analysis of the pointlessness of human activity that fascinate college sophomores drunk on wine. The ghost watches.

What is it waiting for? We don’t know. Or is it trapped at the place where it was last happy? It occasionally trades a few words with a neighboring ghost, who is waiting for “them” but no longer remembers who “they” are. It’s a sad moment, undercut by our realization that this ghost is wearing a patterned sheet.

As the end of the page is rapidly approaching and I have another movie to talk about, I’m going to simply say that I loved this movie, even if I don’t quite know what it was about. It reminded me in some places of Truly, Madly, Deeply (1990), Anthony Minghella’s movie starring Alan Rickman as a ghost called back to the home of the woman who can’t live without him. But the movies aren’t anything alike. I plan to see it again.

Take away the nudity and that’s pretty much what you have in The Little Hours, a movie that seems to have been made entirely by and for Brooklyn hipsters. (I was surprised to learn that it was shot in Italy; aside from a few vintage buildings, it could as easily have been filmed in the Catskills.) The plot is loosely derived from one of Boccaccio’s bawdier stories: A young servant (Dave Franco), on the run from the vengeful master he cuckolded, takes refuge in a nunnery where he pretends to be a deaf mute. He immediately becomes the target of three sexually repressed novitiates who have been dumped there by their families.

Unlike his Italian forebears, writer-director Jeff Baena is not after titillation (there’s almost no nudity). Like Mel Brooks and Monty Python, he seeks humor by juxtaposing a medieval setting with modern sensibilities. This is mildly amusing when people like John C. Reilly and Nick Offerman play their ridiculous characters straight-faced. For too much of the rest of the movie, this simply consists of nuns swearing like Scorsese gangsters and talking about sex, as if that in and of itself was funny. It’s tentatively scheduled to open hereabouts on August 4.