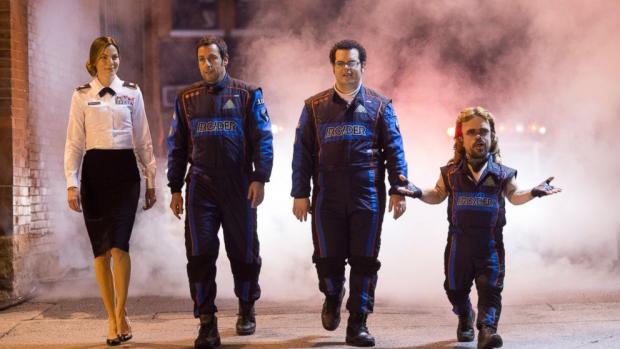 What a great idea for a movie – if only it had been made about 20 years ago.

In a nutshell (and Hollywood movies don’t get made if you can’t fit the idea in a nutshell), Pixels is Ghostbusters versus video games. We’re talking old school video games here, the kind you had to go to a video arcade to play. If you don’t know what a video arcade is, ask your parents. It was an 80s thing.

And therein lies the problem. This is a movie made for teens and twentysomethings—you know, the ticket buyers who keep Hollywood solvent every summer—by giving them everything they like: minimal plot, special effects, stars who are not to be taken seriously. But it’s made for that demographic as it existed in the late 1990s.

That’s the last time that people who grew up plugging quarters into games like Centipede, Donkey Kong and Frogger were still going to the movies on a regular basis. It’s also about the last time that Adam Sandler had any hope of being the new Bill Murray.

Sandler stars (if I may use the word loosely) as Sam Brenner, whose life peaked in 1982 when, at the age of 10, he was publically bested  in a national video game championship. His self-confidence took a dive and life brought him a bad education, a failed marriage and a job installing Tvs.

His sidekick Cooper fared somewhat better: as we catch up with them, he is played by Kevin James and employed as the President of the United States.

You may think, well, that’s sort of interesting, a chance of pace role for a guy known for playing well-meaning but hapless lunkheads (albeit with surprising terpsichorean skills). That would be putting more thought into the casting than anyone involved with this production did. Kevin James plays the same part he’s played in every movie I’ve ever seen him in. The fact that this character is in charge of the United States government is surreal (defined as something we see happening even though we know it to be impossible), but not in a stimulating way. It’s surreal in the way that makes you want to take a few aspirin and lay down for awhile.

Anyway, Earth is being attacked by aliens who, in some weird display of extraterrestrial sportsmanship, have challenged us to battle by what they assume are our own rules, which they believe are expressed in 1980s video games. Except on a much bigger scale: Pac-Man using the streets of Manhattan as the playing grid. This flummoxes the military, requiring Da Prez  to call in—who else?—his old buddy Sam.

In other words, we have a movie built from the question, what kind of job would adequately, even heroically employ the skills of a mallrat who spent his young years obsessively playing arcade games?

If you can get past the fact that Pixels should have been made twenty years ago, the idea has a kind of goofy potential that might have been realized by the right director, cast and script. But the results onscreen never had a chance, primarily for two reasons:

1. Adam Sandler stars in it.

A younger Sandler might have pulled this off, under the reins of a capable director. The fiftyish Sandler, not so much. Despite liberal application of what appears to have been Walter Matthau’s leftover hair dye, Sandler looks sloppy and lethargic. The only parts of the film where is remotely plausible are the scenes where he admits that his has been a wasted, pointless life.

This same kind of work ethic is displayed by Sandler’s production company, Happy Madison films, which exists to make inexpensive vehicles starring Sandler and his friends. Par for course, everything in Pixels looks cheap, slapped together as if all audiences want to see is Grown Ups 3. In its defense, I will acknowledge that Sandler did not hire David Spade or Rob Schneider, which is all to the good. But the script, inspired from a short video that went viral, was assigned to a pair of his usual hacks, while direction was handed to Chris Columbus—a step above the guys Sandler usually works with, but not enough of one. (Remember how the Harry Potter films got better as they went along? That’s because Columbus stopped directing them.)

The film also stars Peter Dinklage, Josh Gad, Michelle Monaghan, Brian Cox, and Sean Bean. Their careers will presumably survive. Well, maybe not Gad’s, who is said to be terrific on the Broadway stage but just doesn’t click onscreen. As a genius gamer and conspiracy theorist, he delivers what has to be the oddest line I’ve heard in a movie this hear, on meeting an attractive woman: “You smell so nice, like the book of Genesis.”

Like the recent Self/Less, Pixels shouldn’t have been released in the summer: it might not have looked as bad as it does if it weren’t up against movies featuring state-of-the-arts effects. In its favor, I will grant that it is inoffensive: you could take your kids to it, which isn’t true of most of Sandler’s oeuvre. But really, your kids deserve better.