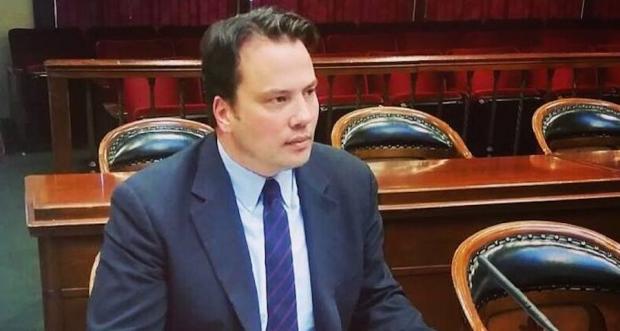 Erie County Comptroller Stefan Mychajliw kicks off his 2019 campaign for county executive with a some dumb rhetoric perfumed with notes of bigotry and bulldog.
by
The Public Staff
/ Jul. 25, 2018 8am EST

Too rarely do we praise what is good in our daily newspaper, but amen to the editorial published in last Saturday’s Buffalo News, titled “First Amendment is under attack by newsprint tariffs.” We’d have made the headline read “Trump’s newsprint tariffs,” and that’s not mere quibbling: The daily paper’s first mention of the tariffs, which were implemented at the beginning of April and have added a crippling 30 percent to this publication’s printing costs, was in a May 6 column by News editor Mike Connelly, in which Connelly bemoaned not so much the tariffs but the consequent shortage of paper for the News’s presses. In the column, Connelly seemed to put the onus for that shortage on Canadian newsprint manufacturer’s for “passing along the cost of defending against proposed Trump administration tariffs”—note that these were not “proposed” on May 6 but already in effect—by, for example, selling their paper to other markets unburdened by Trump’s job-killing tariffs, which all but one of the remaining newsprint manufacturers in the US oppose. (We’ve heard that the News’s newsprint shortages at that moment may have had more to do with staffing changes in the production management team made earlier this year, but it is certainly true that Canadian companies, which supply the bulk of North American demand, have found other clients in order to avoid the US tariffs.) Since then, of course, the Buffalo News’s financial problems—for which the tariffs are just the most recent exacerbant—have become a woeful public spectacle, as reporters and columnists and other staff are let go or reassigned, sections are cut, and the possibility of the News become something less (or at least something different) than a daily print paper looms. Saturday’s piece, by the editorial board, is a response to comments last week by 20 members of Congress (including, locally, Congressman Brian Higgins), representing various regions and both major political parties, “warning the International Trade Commission that the Trump administration’s tariff is a box-cutter at the throat of democracy.” Here are the last two paragraphs:

Yet the Trump administration cavalierly imposed the tariff that almost no one wanted and, in so doing, threatened countless more jobs than it created or helped to protect at a single paper mill. Worse – and to the broader, overarching point – it risks fracturing the Constitution’s First Amendment pillar, posing a risk to Americans’ fundamental right to know what is happening in their school districts and city halls and their state and federal governments. Even though he had his own quarrel with an aggressive press, Thomas Jefferson understood the issue. If the choice were between “a government without newspapers or newspapers without a government, I should not hesitate a moment to prefer the latter.”

Whether intended or not, the tariff is choice for the former.

Well put, Buffalo News. We’re on your side.

A couple weeks ago, former New York State Senator Marc Panepinto pled guilty in federal court to a corruption charge: After learning, in early 2016, that he was under investigation for making unwanted sexual advances to a female staffer while on a trip to New York City, Panepinto directed another, senior staff member to offer the woman who’d made the complaint money or a job in exchange for not participating in the investigation. The woman cooperated, Panepinto announced he would not seek reelection, and, more than two years later, all is revealed. But one question nags: Who is the senior staff member who Panepinto told to offer the woman money or a job in exchange for her silence? Was it his then chief of staff, Chris Savage, who now works for State Senator Chris Jacobs? Whoever it was, isn’t that person culpable too? No one is obligated to execute a boss’s order to do an illegal act.

Although the election for Erie County executive looms some 15 months away, Erie County Comptroller Stefan Mychajliw stuck his chest out into the race early with an intellectually corrupt and populist salvo last week. We get it, it’s hard to get attention for a countywide race that’s a year away in the dog days of summer, but the comments manufactured by the Langworthy-Paladino-Caputo GOP machine and regurgitated by the comptroller were frankly far below Mychajliw’s standard. ”He’s more interested in banning plastic bags, the Paris climate accords, and allowing grown men to use the same bathroom as my daughter than anything else,” Mychajliw said of current Erie County Executive Mark Poloncarz, also calling Poloncarz a “liberal extremist,” as quoted by Buffalo News political columnist Bob McCarthy in a piece about Mychajliw’s fundraising for his challenge to Poloncarz in 2019. Mychajliw and GOP operatives are so touchy about Poloncarz’s laudable efforts to rid our waterways and roadsides of harmful pollution that it’s starting to get weird. These guys love a good plastic bag, presumably even the ones without ‘merican flags on ‘em. But even worse was the mess he stepped in with the transphobic bathroom comment. The plastic bag extremist’s daughter has probably shared a bathroom dozens of times with transgender folks and would never even know. There is zero evidence that transgender people using a bathroom puts anyone at risk of anything ever, and Mychajliw knows this. Hateful comments like these don’t belong in the public discourse, especially now that the February murder of a transgender woman on Buffalo’s East Side, supposedly Mychajliw’s home turf, remains unsolved. Comments like these perpetuate the climate of fear that puts trans people in harm’s way. Are loving plastic bags and hating vulnerable members of the community really the platform from which you want to launch your campaign, Stefan?