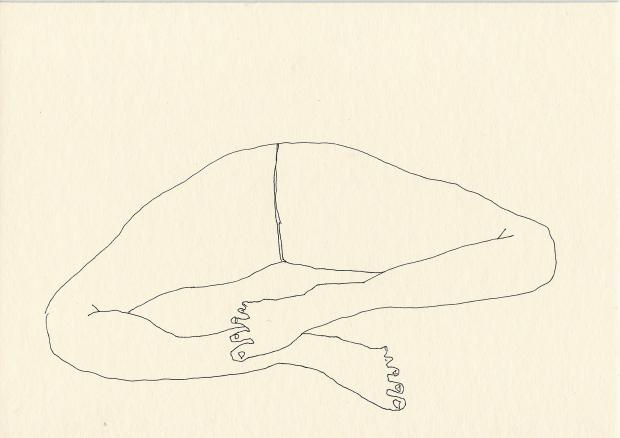 Works by artist Michael Beitz currently on show at the Anna Kaplan Contemporary gallery include several score drawings on notebook or scrap sheets—whatever was handy at the inspirational moment, it looks like—random arrayed on one long wall, and some sculptures, notably of underwear. Porcelain casts of underwear—men’s, women’s, babies’—tastefully displayed by and large, and with only a few underwear jokes added in for good measure and because who could resist the opportunity. The drawings range in mode and appearance from doodles to cartoonish to careful pencil portrait sketches.

Many of the drawings are of furniture—not such as you’d probably choose for your kitchen or living room, but bizarre possible sculptural ideas. An enormously long couch that wraps around itself in a tight spiral. Another couch-like affair that spells out the word “Lies” in cursive writing, the dot on the “i” a little ottoman footstool. A table positioned upside down, the legs on one end pointing straight upward—as normal and customary for upside down table legs—the two on the other end—and for that matter that whole end of the table—curling over into a kind of fetal protective position. Some sketches for furniture-reference minimalist sculptures—a Platonic idea of a chair, Platonic idea of a table. Also several variant ideas for a free-form communal picnic table complex the artist designed and that is now constructed and installed as the gorgeous centerpiece of a community garden and pocket park on the east side of Michigan Avenue, between Laurel and Riley streets.

Also on the furniture matter, in the center of the gallery space are two handsome but otherwise unremarkable blond wooden chairs, placed there no doubt for the comfort of the show visitor, to sit a spell and contemplate the artwork or whatever. Until on third or fourth glance, you notice something odd about the chairs. The right front leg of the chair on the left splays outward slightly, precisely matched in the opposite direction by the left front leg of the chair on the right, splaying inward. Then you notice also, the chair on the right is a bit lower—seat and riser back each by about an inch—than the chair on the left. So sculptural items, these chairs. Though perfectly sturdy and serviceable constructions, despite splays. You can sit on them.

Some persistent images—besides the furniture drawings—are body parts, occasionally sexual, but mostly not, or not specifically. Arms and hands and fingers most notably. The arms and hands in fantastical configurations. A pretzel figure of one continuous apparently boneless arm with hands at both ends. Another near circle of a single doughy arm with a hand at one end, hairy knob at the other. Another drawing of a complicated interlacing of arms—or arm—a little reminiscent of a Celtic knot, or maybe a Möbius strip. And several drawings of just fingers, neatly amputated from the hand or hands they must have come from, as if with a hatchet or ax. Sometimes chopped into further segments, likely with the same sharp instrument. But all in all—in the plethora of arms and hands and fingers, including mutilated fingers—as if touch were a bottom line psychological issue for this artist. Not surprising in the case of an artist who is basically a sculptor, but a problematic issue.

One drawing shows two severed fingers touching—or trying to touch—above a caption—one of only two captions among all the drawings—in a small, spidery script that seems to read: “The hard reality of touch is that it reminds us we are alone in our skin, broken/severed from union with anything or anyone other than ‘ourselves.’” A pretty dismal thought, as well as debatable.

The sculptural underwear—which might also relate to the supposed touch issue—was produced by a variant of the ancient “lost wax” method of casting three-dimensional items, usually in metal. In this instance, an undergarment is coated with slip—a thin mixture of clay or plaster and water—that is then allowed to dry, then is fired or heated to a temperature such that the original garment disintegrates, leaving a mold, which is then used to cast a replica of the original item in porcelain. (The underwear fascination is also well-represented among the drawings.)

The Michael Beitz exhibit is called Guaranteed Painkiller, a reference to the art therapeutic uses of drawing. Regularly, habitually, incessantly.

The exhibit runs through August 4.