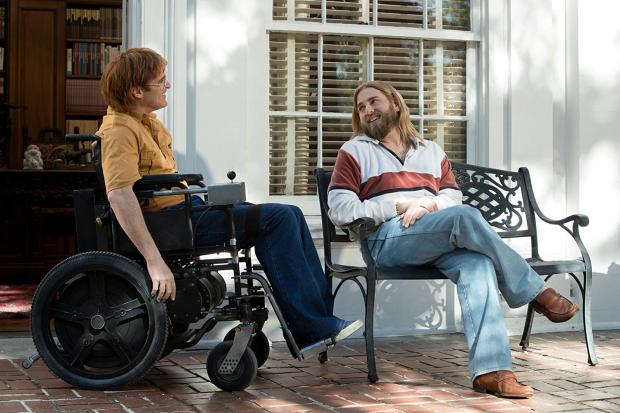 Once seen, the cartoons of John Callahan are not easily forgotten. I remember the first one I ever saw, published in a disreputable magazine I will never admit to having read. (They kept copies at a place I once worked.) In what appeared to be the unsteady scrawl of an untrained amateur, the wordless image imagined a very specific personal hygiene difficulty that might be encountered by someone with hooks instead of hands. (You can imagine the rest—or better yet, not.)

What I didn’t know at the time was that Callahan’s shaky drawing style was not the result of a lack of skill, but rather the fact that he was quadriplegic. His spine was severed in a car accident in 1971, leaving him unable to walk and with only minimal use of his hands. People like him were often the subject of his cartoons, including the one that gives this film biography its title: As a cowboy posse looks at an overturned wheelchair, their leader says, “Don’t worry, he won’t get far on foot.”

Once you got use to him, Callahan was a better draftsman than he initially appeared, just one whose skills were not in fashion in the era when he got started. (You might say the same thing about James Thurber or William Steig.) His disability gave him license for his perspective, which found pitch-black humor in the struggles of the dispossessed of the world, but even those who knew his situation often felt that he went over the line. And of course he did: If anyone told him there was a place a cartoonist shouldn’t go, he would head there as fast as his motorized wheelchair could take him.

Before his death in 2010, Callahan had spent some years with his Portland neighbor Gus van Sant adapting his 1989 autobiography into a screenplay, in which both hoped Robin Williams would star. Of course that didn’t happen, but it’s hard to believe that Joaquin Phoenix wasn’t the best choice for the role. It’s a performance that makes you wonder why the film’s distributor didn’t wait until awards season to release it, as it’s the kind of thing that makes Oscar voters swoon.

Truth be told, van Sant may have been thinking the same thing. It’s been a decade since he last directed a film that got any wide attention, 2008’s Milk. In the interim he made a pair of poorly received features (Promised Land, Sea of Trees) and not much else. The final script for Don’t Worry… focuses on Callahan’s struggles with alcoholism, from which he suffered since he was a teenager until he stopped drinking seven years after his accident.

This is clearly one of van Sant’s mainstream projects, though not without a certain amount of directorial flair. The story drifts almost imperceptibly between different eras in Callahan’s life, charting his progress emotionally more than chronologically. It’s effective if somewhat confusing, and one wonders if it wasn’t primarily a way of the director maintaining his interest in a fairly conventional story. He seems much more interested in the character of Donnie, Callahan’s AA sponsor, played by an unrecognizable Jonah Hill. I don’t know how much of the character is real and how much an invention, but you can sense van Sant’s occasional desire to forget about Callahan and follow this guy instead.

Bearing awards and nominations from more than a dozen international film festivals, the German/Israeli co-production The Cakemaker is a movie of subtle, melancholy pleasures. Its title figure is Thomas (Tim Kalkhof), first seen working the counter at a Berlin café. He falls in love with a married Israeli businessman, Oren (Roy Miller), whose job regularly takes him to Germany. When Oren dies in an accident, the distraught Thomas goes to Jerusalem in order to—well, he doesn’t really know. Visiting the places that were important to the man he loved, he comes to know his wife, Anat (Sarah Adler), and to take a job at the café she runs. The developing relationship between them is wholly believable, which is not the same thing as plausible, as is the film’s sense of the places where it takes place and the factors that affect its characters. The less said about it the better: If you get a chance to see it, I doubt you will regret it.