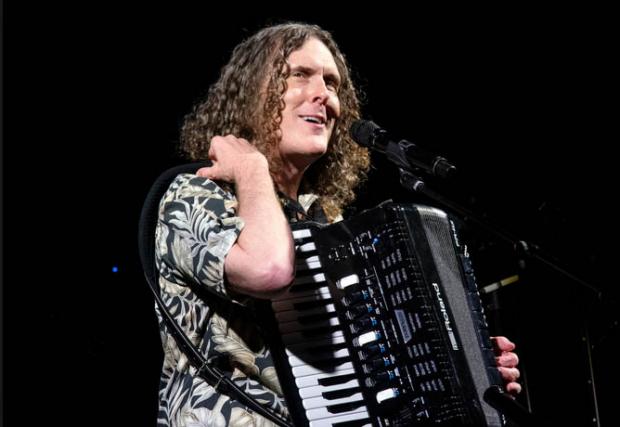 In honor of musical parodist “Weird Al” Yankovic’s appearance at Artpark tonight (with an orchestra, yet), I dug up this interview I did with him many moons ago. How many? To be honest, I really don’t know. But it all seems pretty on target to the peculiar craft that has made him the best selling comedy recording artist of all time.

If there’s ever a Nerd Hall of Fame, you just know that “Weird Al” Yankovic is going to be the charter inductee. For this one-time architecture student, simply making a living playing the accordion was more than he ever dared dream. (In the 1980s, it was pretty much Al and Stan Schmenge.) But in a field given to one-hit wonders, “Weird Al” has been performing brilliant parodies of pop music for almost 15 years. From his solo-accordion renditions of “My Bologna” and “Another One Rides the Bus” though the almost-soundalikes “Eat It” and “Smells Like Nirvana,” Al has consistently proven there’s no song he can’t make cheap fun of. He’s the only performer considered equally cool by fans of every musical genre, which should make for an interesting crowd when he appears at Artpark tonight.

So what is a live “Weird Al” show like?

Well, my publicist likes to call it a “rock and comedy multimedia extravaganza.” First and foremost it’s a live rock and roll show, me and the same band I’ve had for the last decade, with lots of video clips to cover for us during all the costume changes.

When did you start playing the accordion?

My first lesson was the day before my 7th birthday. I don’t recall clamoring for my parents to sign me up for accordion lessons, so I’d have to guess that they were the ones who made that decision for me. I guess they just wanted me to be really popular in high school. I went on yearly competitions, got a few small trophies. Once I was in an all-accordion marching band, with one hundred kids all playing “Rudolph the Red Nosed Reindeer.”

Are you a big polka fan?

I can’t say that I listen to it all the time, but I like it and people get upset when I put out an album without a polka number on it. So the next album will have more accordion stuff. There’s two ways for me of doing these parodies, and I’m not sure which one I like better — the polka rearrangements of popular songs, and the ones that mimic the originals. There’s reasons for doing both — the polka ones because they’re so different, the others because it screws with people’s heads a little, they listening to what they think is a song they know and all of a sudden it’s …not.

In doing parodies, do you need to have the permission of the song’s writer or the original performer?

Legally that’s a grey area, especially since the whole 2 Live Crew case. I always get permission because ethically I think it’s the right thing to do — you’re messing with someone else’s art, so I think you owe it to them. And generally they’re OK with it. I met Kurt Cobain in LA and he told me that he really liked “Smells Like Nirvana” a lot, which is why we still do it live. He said in one interview that he knew Nirvana had really made it when Weird Al Yankovic did a parody of them.

Is everything a potential source of parody for you?

I’m a big music fan and I can certainly listen to a song without thinking, gee, how can I screw this up? Sometimes I spontaneously get ideas, other times I have to sit down and pore over the Billboard charts and figure out what my next target’s going to be, spend time being analytical.

Will there ever be a sequel to your movie UHF?

I get asked that just about every day, but I have to say that I seriously doubt it. I’d love to do another movie, but there’s no major studio banging on my door with suitcases of money begging me, Please Al, please do UHF II. If I were to start another movie it would take a year out of my life and there’s no guarantee it would get made — it’s a miracle when any movie gets made — so I’d rather put my energies in a direction where I know they’ll get used, like making another album or touring or making videos.

How do the guys in your band feel about the kind of music you do?

You’d have to ask them, but I kinda feel sorry for them because, like, my guitar player doesn’t get written up in “Guitar Player” magazine. I’ve read that Frank Zappa’s musicians felt the same way, that people didn’t take them seriously because they played in a “joke” band. And they’re all excellent musicians. Same with Spike Jones in the 1940s — you have to have some incredible chops to be able to pull that kind of stuff off. Sometimes I feel maybe my band guys don’t get the respect they deserve. I don’t know what to say about it — I guess it’s all my fault.

So as the reigning king of polka, what are you doing on Dyngus Day?

Oh, uh, I love that holiday — I don’t know if they celebrate that in LA…Maybe you could fill me in on just what that is? [I explain the Dyngus Day rituals to a skeptical Al, swearing as I do that I’m not making it up] They hit them in the back of the feet with pussy willows? I’ll definitely keep that in mind.