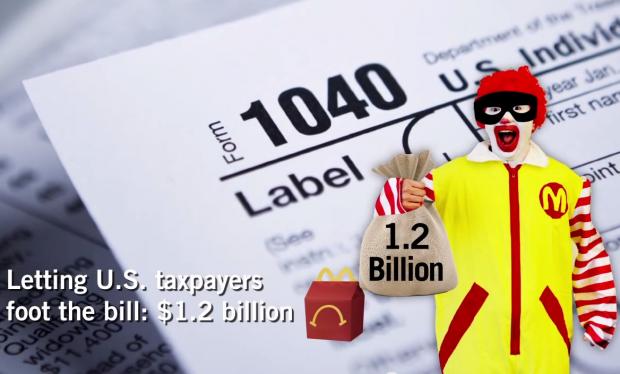 Millions for executives, welfare for workers
by
Alan Bedenko
/ Jul. 24, 2015 5am EST

Facebook has become a sort of modern-day, digitized town square or water-cooler. It’s where we have epic debates and fights over the news of the day, and also share Instagrammed pictures of our dinners. In the last day or so, there’s been a lively debate on my Facebook timeline in response to this post of mine (my Facebook profile is locked down, and my general rule is I won’t friend you unless we’ve met in real life).

If you’re angry that it only applies to fast food franchisees and not to you, then you might consider doing what the fast food workers did and unite to fight for a raise. Maybe join a union. Maybe hold a demonstration.

Some people were angry that this particular segment of the working population will get this rate of pay. Others don’t like the idea of a minimum wage at all. Some think it’ll all backfire and that fast food joints will invest hundreds of thousands of dollars in automating the assembly and delivery of McNuggets. For the most part, the debate was lively and focused on issues rather than personalities, which is nice.

Listen to this Trending Buffalo podcast that Brad Riter and I recorded Thursday: (Direct link to audio)

The people who work these fast food jobs run the gamut in terms of age, social upbringing, socio-economic status, etc. I will say this, however: these workers, whoever they may be, might work a mindless job, but that’s true of practically any assembly line. You get trained, and you do the job. We’re not talking about some knowledge-based industry or something involving a terrific need for independent, logical thought.

I would bet that it’s hard to get people to work fast food in WNY because of transportation issues, the stigma associated with the nature of the work, etc. Indeed, it’s not been unknown to see signs in McDonalds already offering $10/hr because they’re hard-up for people to work there. It’s not a career path many people want. It is, however, sometimes a job of last resort for some, or a first job for others. It also might be a job that some take in order to break the cycle of dependence on welfare. In New York City especially, $15/hr is a pittance. Here, it’s a decent rate of pay. They still likely don’t get any vacation time, which is also, frankly, criminal. The US mandates 0 paid vacation days, just like Sri Lanka, Liberia, and Nauru.

The issue here is that this country has sacrificed so much at the altar of supply-side theory — a completely debunked and false theory that even Democrats have adopted in recent years. Don’t forget that a huge chunk of Obama’s stimulus involved tax cuts and tax breaks for people and businesses.

While productivity has soared, wages have not kept up over the last 40 years; they have stagnated. People work harder for less money. This, frankly, is some bullshit. It has also coincided with rising wage inequality, and a dramatic loss of influence and membership in unions. Some in DC talk about rolling back Social Security and Medicare — programs I’ve paid into since 1985, and you’re damn right they’re an entitlement, in the literal sense of that word. Cut medical for the aged and social security — for what? To fund more wars and occupations, or to give Paris Hilton another tax break?

When you give a tax break or a higher wage to someone who is the working poor or middle class, that will have a stimulative effect on the economy. When you help small businesses and entrepreneurs and ease the barriers to starting a business (or at least make them easy to find and follow), you’re helping to stimulate the economy. New York has big lessons to learn about that; query why no one has done anything about it. When a poor or middle-class person has more money in her pocket, she’s able to go out and buy a car, or a new house, or take a vacation, or replace her shitty dishwasher, or buy her kids some clothes.

On the other hand, when you give another tax break to the ultra-wealthy, you see no stimulative effect because it can’t affect them. If I’m a millionaire today and you give me a tax break, I’m a millionaire tomorrow, too. What is there that I can buy today to stimulate the economy that I couldn’t have bought yesterday? Whom could I hire tomorrow whom I couldn’t hire yesterday? What am I going to do, go out and buy another Ferrari even though I could have afforded to do so yesterday, too?

If there’s a transformative moment for this country, it’s in the notion that you have to give working people and the middle class a hand, and a break. If Warren Buffet or Donald Trump have to pay more in taxes (whether income or otherwise) to fund that, so be it.

So, as we talk about a big business — a fast-food franchise generally costs a shitload of bank, and owning 30 outlets means you’re not some mom & pop — we can ask that business to bump its workers’ pay to something they can live on. $30k (no vacation, likely no other benefits except, thanks to Obamacare, health insurance), is a decent rate of pay for someone assembling widgets or hamburgers. I don’t begrudge them their fight and their win, and what just happened serves as a lesson for people in other jobs with shitty pay that if they unite and speak with one voice to demand better pay, well hell, it just might work. This is a transformative moment in America — the first time in a long time that this sort of direct citizen action brought about a positve response with respect to pay. If they can do it, so can you.