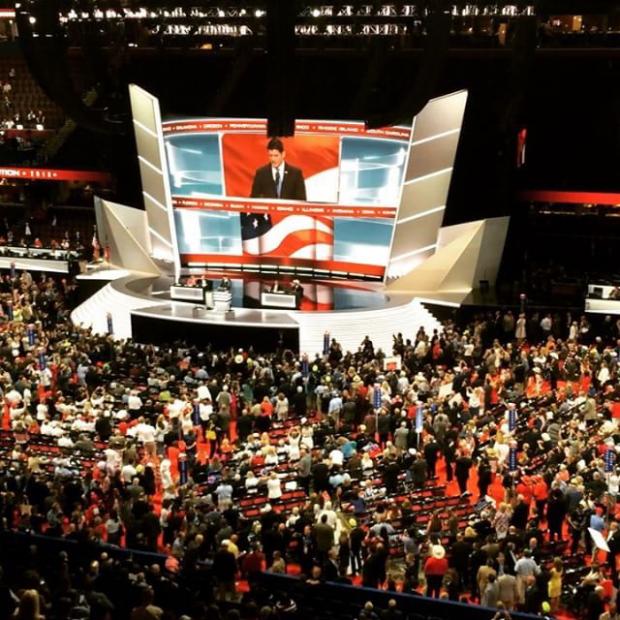 As far as we can tell, projected protests at the Republican Convention have not materialized—at least not yet. On the first day of the convention, we walked out of the Renaissance Hotel in Cleveland into the new Public Square, and found … nothing. A few groups of three or four people each were scattered around the square, holding signs and talking amongst themselves. There was a stage at one end of the square, and people had signed up to speak from the podium at designated times. We listened for a while to a woman describing the death of her sons in a police shooting. She was impassioned and clear as she called for peace in Cleveland, but there didn’t seem to be any question about peace on the lips of dozens and dozens of armed, uniformed, be-kevlared peace officers looking on. A little further on, a group of them warily eyed one backwoods citizen with an ancient assault rifle slung across his back, asserting his legal right to carry. He didn’t need to speak.

Before we entered the ultra-High Security Zone of Quicken Loans Arena yesterday, we paused to observe the small “protest zone” outside. An earnest man with a bullhorn and a speech defect exhorted the passing delegates to accept Jesus Christ as their personal savior, enacting an extreme case of preaching to the choir. Behind him stood a little group of Trump supporters with a sign that read “Trump’s Wall Brigade.” These “protestors” were protected by a phalanx of armed police officers.

The entire area of downtown Cleveland hosting the convention, from the Tower City-Public Square area to Quicken Loans Arena to the far-flung Media Center, built into a converted parking lot/bunker under the Cleveland Convention Center, has been scrubbed of all civilian presence. There is no one here but the credentialed and the cops.

Within this Green Zone—a highly fortified encampment carved out of the city—a network of heavy metal grid fencing has been built, ten feet high, to make it impossible for vehicles or pedestrians to move freely within the Zone. When you enter the Zone, you’re theirs.

The armed officers in the security detail that checks every bag as we pass through three levels of metal detection are totally dedicated to their task. No water bottles, no umbrellas, no whole fruits.

Inside the Arena, there is an extensive network of Secret Service operatives who stand at all entrances and passageways, looking for trouble. And there are volunteers in neon yellow hats who control their areas completely, looking for any sign of non-compliance. Their authority is absolute.