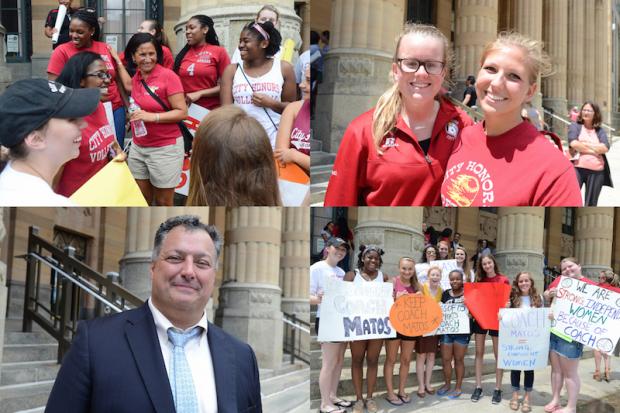 A peaceable throng, dressed in their City Honors cardinal and gray, rallied for their beloved coach, Deborah Matos, on the steps of City Hall on Tuesday July 21. The rally of dozens of current school athletes, as well as alumnae, was meant as a strong visual for the Board of Education, called to a special session that afternoon to discuss whether the coach could keep her job.

The girls volleyball and softball coach has been under investigation after the allegations of bullying made in 2014 by one parent. This parent, along with a few reported others, complained about the coach and her coaching style previously, in 2013.

The Public spoke to Erin Heaney, a 2005 alumna of City Honors and who now works as director of Clean Air Coalition of Western New York. There for emotional support, Heaney was also surprised and pleased that she was able to enter the Board meeting to speak on behalf of her former coach in what she says was an unprepared, two-minute speech.

“Coach Matos is the most successful female coach in Buffalo Public School history,” Heaney says, “and there’s been one disgruntled parent who launched a complaint when her kid was cut from the volleyball team in 2014. The district hired an investigator from Rochester. He interviewed the parent, the student and the principal (William A. Kresse, Ph.D.) and no one else.

“The investigator concluded that she should be removed from coaching for being verbally abusive. We all stay in touch with coach, she’s been coaching for over twenty years. She is the most amazing woman, that’s why there are more than fifty letters of support from alumnae, parents and students on her behalf.

“She’s a formative figure in my life. She is a tough coach and she has high expectations. She made me a strong woman, able to take leadership roles. There’s a double standard, male coaches are encouraged to yell. She’s being punished for being different.”

Surrounded by supporters, coach Matos says “I am the most fortunate person on Earth,” as she looked around her. When asked when she thought that she would know her fate she says “I don’t know if it’s today – it could be days, weeks or hours. I know it’s best to wait to talk about this, and then I will be happy to talk to you after,” she says.

Nearby, volunteer assistant coaches Annie Doyle and Emily Zuchlewski emphasize that the rally is meant for coach and “On behalf of future girls in sports at City Honors. She’s been my coach since fifth grade,” says Doyle, “and she has truly shaped us. I wasn’t a star player and both of us (her and Zuchlewski) ended up being starting pitchers and captains.”

Coming out of City Hall is Marc Panepinto, NYS Senator and a City Honors parent. “I’m here to support my good friend Deb Matos,” he says, “She’s been pilloried by parents who don’t like her coaching style. And by a principal who doesn’t like strong ethnic women.

“She’s been under attack for two years, the parent enabled by the principal. Coaching for the fall starts in twenty-one days, and this is the last time the board meets before then. Deb Matos is a builder of women and a molder of leaders. My daughter, Julia, has been coached by her since eighth grade and she’s had the most positive influence on her besides me and my wife – she prepares them for the real world. Jay McCarthy asked me to say something at the Board meeting today. She’s the kind of person that we should want to promote in the city schools. The district would be a much better place with more role models like her.”