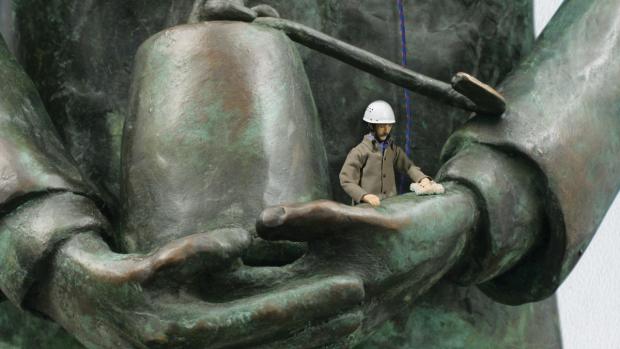 You can’t see the entire Screen Play: Life in an Animated World show at the Albright-Knox in just one visit. About 50 screen works by 40 or so artists from nearly as many places around the globe. Total running time somewhere around 10 hours. That’s not counting artist Ian Cheng’s two “infinite duration” works.

And serious cartoons along with comic. Or comic serious. Like German artist Peter Wächtler’s retelling of the story of Sisyphus as a haggard actual rat but with substantial human qualities and demeanor. He gets out of bed in the morning and first thing and only thing before heading off to work, picks up a bowling ball next to the bed and places it on a table. Next we see him returning home and heading straight for bed, when he trips on a rug and the bowling ball rolls off the table and lands on his head, nearly flattening him. He recovers—barely—and crawls into bed. Next day, same routine, and the next day, and the next. Occasionally—maybe once a week, we get the sense—some slight variation in the pattern. But then right back to routine. Life as one darn thing after another, and usually the same thing.

Or serious serious. Like William Kentridge’s triptych on historical apartheid matters in South Africa, where he is originally from. The animation is accomplished by film capture of successive versions of large charcoal drawings that he continually erases—not entirely but in parts—and redraws. The work has a slightly grim and messy look, appropriate to the grim politics and economic power topic. About how money trumps morality. And an overall look and feel a little reminiscent of the Art Spiegelman graphic novel Holocaust tale Maus.

American Joshua Mosley’s video mixes the banal and surreal in an unassumingly told little near love story between a park ranger devoted to the care and keeping of a monumental statue, and a young woman newcomer in the community, in a technological job with a fiber optics company that’s going to mean relocating from time to time. It’s not going to work out—and doesn’t—as long as he can’t see beyond his statue job. Ships that pass in the night.

A Vue recounts the story of Henry, a park ranger who has devoted his life to maintaining a gigantic bronze statue of George Washington Carver. The narrative develops when Henry meets Susan, who works at a fiber optics company. As the couple discuss the relationship between their lives and their jobs, it becomes increasingly difficult to distinguish an admirable task from a meaningless one. The statue of Carver remains motionless while ink wash drawings move unsteadily around it. Serving as an exploration of dedication to work rather than a mere tribute to an American hero, it symbolizes the dichotomy inherent in work, questioning whether this common means of self-definition might instead be a mechanism for self-obliteration. The musical score, written in collaboration with Abby Schneider, adds a grim intensity to the piece.

The animation combines digitally photographed stop-motion puppets, a 24” bronze monument and ink-wash painted environments. The sets were designed using 3D rendering tools. The animation and the bronze George Washington Carver, 150 ft. are both components of the installation.

And something like claymation run amok in two works by American Alison Schulnik. A kind of swamp creature meets space aliens story in one piece. In the other, a veritable community of clay human or near-human figures continually shape-shifting and morphing into everything from mushrooms to mountains. Along with dance interludes—still in claymation—of credible Martha Graham choreography.

Britisher Helen Marten’s video called Orchids, or a hemispherical bottom reminds me of Lewis Carroll’s poem Jabberwocky. You look at the images and listen to the voiceover narrative and think from moment to moment you’re almost getting it, just not quite. You need to look and listen harder. Concentrate better. On her explanations of what those visuals—not really abstract, but not apparent just what they are, either—are all about. What it all means.

Chinese artist Zhang Xiaotao has a Marxian allegorical horrific vision piece about class struggle on several levels amid the construction and destruction of a series of modern industrial civilizations. The three class levels are armies of ants as proletariat, troops of iguanas as middle management, and at the top, humans, but fleshless, just skeletons. Assembly line apparatus carries a mix of deceased of each species off to Holocaust reminiscent furnaces for immolation.

A triptych of allegorical—for want of a more certain descriptive as to genre, strategy, style—works by the Russian artistic collective known as AES+F. Strange stuff. Slow motion is a basic technique, and bizarre settings and actions, or often inaction. On the top of a snow-covered mountain a troupe of attractive young people of both sexes and mixed ethnicities reiteratively act out a scenario vaguely recalling the ISIS beheading videos. Though no bloodshed in this case. A little like the blocking out of a sword fight for a Shakespeare play. Interspersed with sandy desert scenes of oil pumps monotonously pumping, and juxtaposed Dutch windmill.

Iranian artist Tala Madari has a couple of comical short works, one about a dancer who dances till he disappears, one about a much beset little character—neighbors keep throwing things over the fence at him, everything from bricks to barbells—who winds up pounding himself into the ground with a mallet. Anything to get shut of the neighbors.