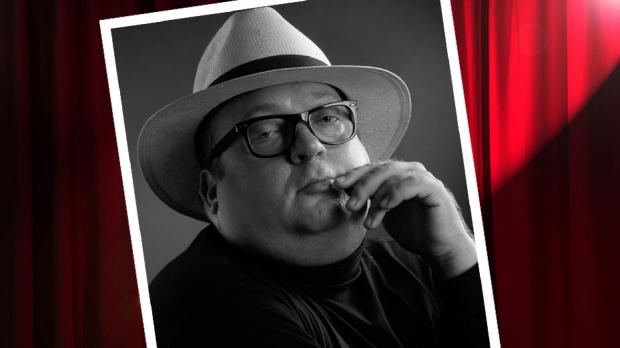 Christopher Standart has never been a leading man. He has played many leading roles, of course, but even these have been character parts. His range is expansive and his sense of humor is devilishly irreverent. He was tyrannically sublime as Sheridan Whiteside, the wheelchair-bound broadcaster trapped in rural Ohio in The Man Who Came to Dinner. More than once, he has assayed “the Thurston roles” in Greater Tuna, channeling the men and women of the small town of Tuna, Texas. With his large round face and small pursed mouth, he was the perfect choice to play Truman Capote in the one-man show Tru at BUA.

For his current theater venture, BUA realized that Christopher Standart may not resemble the iconic star in any other detail, but he’s got Bette Davis eyes. He will be playing the great Bette Davis in Bette and Joan: the Final Curtain, opposite Jimmy Janowski as Joan Crawford. The production opens this weekend at the Alleyway Theatre complex.

Standart is often to be seen in a dress. The old women he has played seem like Mrs. Butterworth meets Godzilla. He’s a terror in a house frock. And yet one of the most convulsive moments of laughter I have ever had in a theater was seeing Standart saunter onto the BUA stage as a Las Vegas showgirl with all the confident superiority of a supermodel in L’Imitation of Life. (At age 89, my own mother considers Standart possibly to be her favorite Buffalo actor, and still tears up with laughter when she recalls him playing the jealous schoolgirl companion of Christina Crawford in BUA’s Mommie Queerest.)

There is nothing “Brand X” about Christopher Standart.

For all the hilarity he has provided to audiences during his career, Standart is also capable in serious roles, and can even be terrifyingly menacing. Last season he played Judge Danforth in Arthur Miller’s The Crucible at ART, and he once played sadistic Tinker in Sarah Kane’s Cleansed at Torn Space. Among his favorite productions he counts Amadeus and The Cobbler at the Irish Classical Theatre and The Devils at Torn Space. On the other hand, he has done musicals, and counts playing Mr. Applegate in Damn Yankees and the Captain in Poseidon among his successful theater outings. He was also seen in Love’s Labour’s Lost at Shakespeare in Delaware Park.

Subversively, even daringly funny, and profoundly talented. That is how we see Christopher Standart. How does the actor see himself? Here, as he prepares to trod the boards as Bette Davis and to hold his own opposite Jimmy Janowski as Joan, Mr. Standart submits to The Public Questionnaire.

What word would your friends use to describe you?
Generous.

What quality in your current character is most unlike your own personality?
Compulsive.

What quality in your current character is most like your own personality?
Survival instinct.

When and where were you the happiest?
Happiness is a choice.

What is your idea of hell on earth?
Chaos.

What is your greatest fear?
Being blind.

Which talent do you most wish you had?
Tap dance/play the violin.

What superpower do you most wish you had?
Telekinesis.

What would you change about your appearance?
My buttocks.

What trait do you most despise in others?
Self-delusion.

What trait to you most despise in yourself?
Being opinionated.

What do you most value in your friends?
My best friends make me laugh.

What do you consider to be your greatest accomplishment?
Being alive.

What is your guilty pleasure?
Shopping.

What character from fiction do you identify with most?
Lily Bart [heroine of Edith Wharton’s House of Mirth].

What person from history do you identify with most?
[Irreverently mischievous socialite] Harry Lehr.

What do you consider to be the most overrated virtue?
Heavenly or deadly?

On what occasion do you lie?
Circumstantially.

What was the subject of your last Google search?
How to treat scalp eczema.

If you come back in another life, what person or thing would you like to be?
A scientist.

What is your most prized possession?
My Snitznoodle.

What role, in which you will never be cast, is actually perfect for you?
Desiree Armfeldt in A Little Night Music.

What is your motto?
Try to stay beyond reproach.