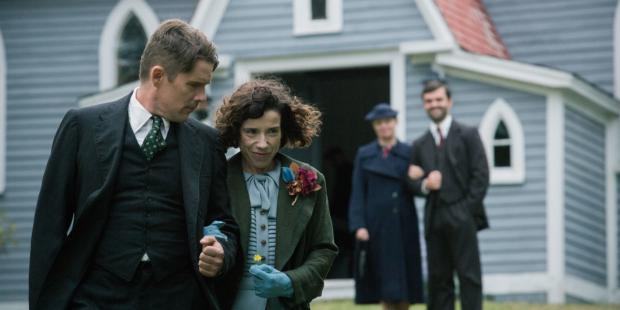 This morning’s email included publicity for a new film which one admirer describes as “A rock’n’roll rollercoaster of a movie punctuated with deranged human beings doing awful, awful things.” I’m not going to be disingenuous and claim to be mystified why anyone would consider that a recommendation. Still, especially at this time of year, one tires of that kind of thing and wishes that the movie gods would send something more uplifting one’s way.

And sometimes the movie gods respond. Maudie, which opens Friday at the Amherst Theater, is a film to fall in love with.

British filmaker Aisling Walsh’s movie is a biography of Maud Lewis, born in 1903 in Nova Scotia. She was crippled from a young age by rheumatoid arthritis, and after the death of her parents in the 1930s was left in the hands of a brother and aunt who clearly regarded her as a burden. Determined not to be institutionalized, she found a position as a housekeeper for a local man who placed an ad at the general store.

To call the place where Everett Lewis lived a house is a stretch. It was a utilitarian room in a remote area, 10’ by 12’ with a sleeping loft, no gas, plumbing or electricity. I presume he built it himself; the film is parsimonious with details like that, though to be fair they may have been hard to come by. Lewis was an orphan who made his own living doing odd jobs and selling fish door to door. If there was a precise antonym for “affable,” that would be the word to describe him.

Do they fall in love? You could say that love existed by the end of their lives. It grows out of accommodating each other. Everett wants an improvement in his living conditions and, well, what a man wants from a woman. Maud wants security and peace. And one other thing: time and tools to paint.

That Maud Lewis is remembered today is for her paintings. Various sources say that she was taught by her mother or that she taught herself; her style was simple, apparently begun as a way of decorating dull spaces. She seldom produced anything bigger than the size of a piece of paper, but she produced many of them, using house paints and whatever surfaces were available. At the time of her death, the entire interior of the house was covered with her brightly colored images of the rural world she saw.

Although the Lewises found something of a market for Maud’s pictures, she didn’t do them for money: she did them because they brought her joy, in a life where little else did that.

Maud is played by Sally Hawkins, the extraordinary British actress who hasn’t had many leading roles in the movies since Mike Leigh’s Happy Go Lucky. (You may recall her as the mother in Paddington.) Like the rough Nova Scotia landscape, her Maud isn’t pretty but she is beautiful, and if her disabilities aren’t quite as extreme as re-enacted by Daniel Day Lewis as Christy Brown in My Left Foot, it’s still a comparison worth making: Hawkins she’s that good. As Everett, Ethan Hawke worked with Hawkins to pare their dialogue to a minimum: these are not people who would have talked a lot to each other.

Writing in 1997 about an exhibition of Maud’s work, Bernard Riordon, director of the Art Gallery of Nova Scotia, said “I think it will bring joy to people, and that they will go away feeling a great deal of satisfaction in the value of simple things.” The same is true of this movie.