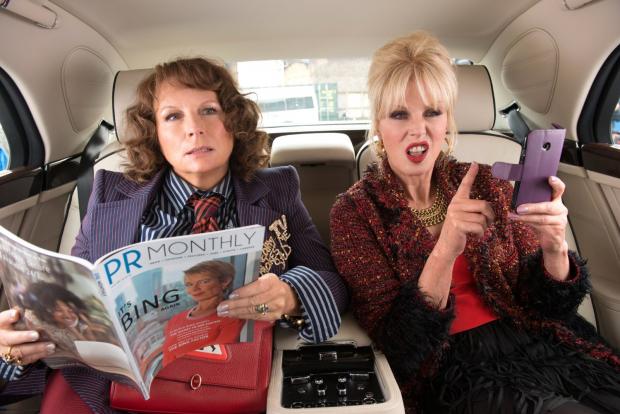 Jennifer Saunders and Joanna Lumley in Absolutely Fabulous: The Movie.
by
M. Faust
/ Jul. 20, 2016 8am EST

Recognizing that even movie reviewers need time off in the summer, the gods of cinema gave us Absolutely Fabulous, a movie that couldn’t be any easier to review. It requires only two things:

1. A statement as to whether fans will like it (they will), couched in a warning that if you’ve previously never seen the show, this may not be the place to start. Not because there’s any back-story to catch up with, but because it’s a bit of an acquired taste, especially for American audiences who aren’t used to how gleefully mean British sitcoms can be. (The ones that are shown on PBS are the exception.)

2, A cursory rundown of what, in another film, would be called the plot, padded out with examples from AbFab creator/writer/co-star Jennifer Saunders’s bottomless bag of gags. As they have been since the show debuted in 1992, Edina (Saunders) and Patsy (Joanna Lumley, whose agelessness has been used as a ghoulish joke since at least the last episodes of AbFab in 2012) are bottom feeders in the British fashion industry. Nominally Eddy is a PR agent and Patsy a magazine editor, but they have long perfected the art of having others do their work for them, leaving them free to drink, take drugs, and spend money 24-7.

As happens periodically on the show, their source of funding dries up. In this case, Eddy’s ex Marshall (Christopher Ryan, whom you may remember as Mike “The Cool Person” on The Young Ones) is cutting them off so as to fund his new life as a woman. (“At least your feet are small—you’ll be able to get shoes,” comments Patsy in a rare moment of empathy.)

Giving that Eddy’s last remaining client is Lulu (if you’re not an Anglophile this just isn’t going to work for you), she sets out find a superstar client. This being a world where Kate Moss still matters—to be fair, it’s also the only one where she ever did—the news that the model is looking for new representation is a godsend to Eddy. By which token, accidentally killing Moss is a one-way ticket to pariahville.

If the fashion industry has ever taken offense at Saunders’s lambastings, you wouldn’t know it from this film, which features wall-to-wall cameos from designers and supermodels past and present. Which isn’t to say you have to be au courant to get all the jokes: Shuddering at Patsy’s too-fond memories of a late 1960s dalliance with her dad, Stella McCartney mutters, “And to think we all blamed Yoko.”

All of the original cast is back, including daughter Saffy (Julia Sawalha), the unthanked voice of reason, and assistant Bubble (Jane Horrocks), whose nickname now inspires not only her clothing but her abode, in a gag that arrives late in the film.

And of course there’s the comic chemistry between the two co-stars: Saunders, overweight and graceless, tottering around on shoes that are as altitudinous as they are ugly, leading to any number of uninhibited pratfalls, and Lumley, for whose career AbFab did what Airplane! did for Leslie Nielsen, so monstrously callous that you almost feel bad for laughing at her. Almost, but not quite.