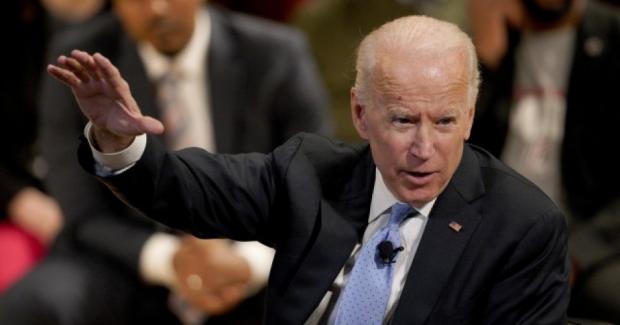 We are watching a campaign textbook demonstration of the most basic strategy there is: An incumbent President gets to define his opposition before the opposition defines itself, because the opposition is still figuring out who it is.

President Donald Trump’s campaign seeks re-election by holding his base and winning again in the four Blue states he won by just a few thousand votes in 2016. The evidence so far is that his candidacy rests on stimulating turnout among his core demographics in Wisconsin, Michigan, Pennsylvania, and Florida. A daily transcript of his messaging can be read on Twitter but can also be heard live on any AM radio station that carries the Rush Limbaugh and other live talk shows, which consistently deliver huge audiences notwithstanding some erosion in recent years.

The gist of that messaging is that Democrats have been completely taken over by Alexandria Ocasio-Ortiz and her squad of anti-American, anti-Israel, pro-abortion socialists who want to force middle-class taxpayers to pay reparations, pay college tuition for kids not their own, lose their health insurance, and embrace brown-skinned immigrants who will get free healthcare. Should you disagree with part or all of this agenda, the messaging goes, then you are a racist.

Thus the past week’s frenzied media coverage of Trump’s Tweets has amplified his basic message to his core audience.

That message is also having an effect on Democratic primary voters. By focusing media attention on AOC et al., and by doing exactly what the late GOP campaign strategist Lee Atwater bluntly advised decades ago (yelling “N-word N-word N-word”), Trump has achieved the desired reaction: a unified Democratic response in defense of the four minority women Members of Congress who are now the face of the Democratic Party.

Vice President Joe Biden, who has universal name recognition, has not been a part of the story. Neither Senator Elizabeth Warren nor Senator Kamala Harris, the two leading female presidential primary candidates, are as well-known as is AOC.

In short, Trump and his surrogates and his amplifiers will continue to do whatever they can to make sure that the Democratic candidate for president is not a white male named Joe Biden.

Lucky for Trump, the entire Democratic membership of the House of Representatives, plus the news media, have become Trump amplifiers.

The national media and social media as well can be expected to devote enormous airtime and bandwidth to the upcoming trials of accused sex criminals Epstein and Weinstein, both of whom were sometime supporters and companions of former President Bill Clinton. Political campaigns operate in the message environment shaped by such events. A sensible prediction: Lurid stories of misogyny and of predatory sexuality, together with the ongoing narrative of impunity in high society, will infect male candidates. As the demise of former Senator Al Franken shows, Democrats will hound their own transgressors; as the utter dominance by Donald Trump of the Republican Party at every level shows, Republicans shall pay any price, bear any burden, meet any hardship, oppose any foe, in order to assure the survival and the success of Donald Trump.

Biden is currently seen by most campaign veterans as the only credible threat to Trump in the Great Lakes states where a significant portion of the electorate is white, elderly, moderate-income, low-education, and has a history of support of Democrats.  That may change should the 2020 campaign season be reshaped by the high-profile misogyny and sexual abuse trials in the way that the 1992 campaign season was reshaped by the Anita Hill drama during the confirmation hearings for Supreme Court Justice Clarence Thomas. The 1992 election cycle became the “year of the woman,” and saw the election of Carol Mosely Braun, Patty Murray, Barbara Boxer, and Diane Feinstein to the US Senate, and the end of George H. W. Bush’s presidency.

Neither Trump nor any of his surrogates or amplifiers can credibly make the case that Biden shares much of what AOC either advocates or has been deemed by the Trump campaign to advocate. The roster of differences, of course, makes Biden unpalatable to that portion of the Democratic primary electorate that likes AOC and her program. But outside of a few college towns and big-city precincts, there seems to be little Democratic constituency for reparations, open borders, universal healthcare at the expense of existing plans, divesting from Israel, and other positions. Biden and his campaign have embraced the consensus view of campaign managers in the sweeping midterm Democratic House victories of 2018: that most voters want to preserve and repair and not to overturn Obamacare, border management, foreign policy, etc., and to have done with the disruptive stridency and name-calling.

But what Trump is doing is to prevent a repeat of 2018. This week, his tactic of defining the Democrats as the party of AOC and the “squad” has gained a national audience far broader than his base of Rush Limbaugh and Sean Hannity audiences.  If Trump’s calculated misogyny helps eclipse the former Vice President’s candidacy, then the next question becomes whether Senators Warren or Harris get defined as AOC.