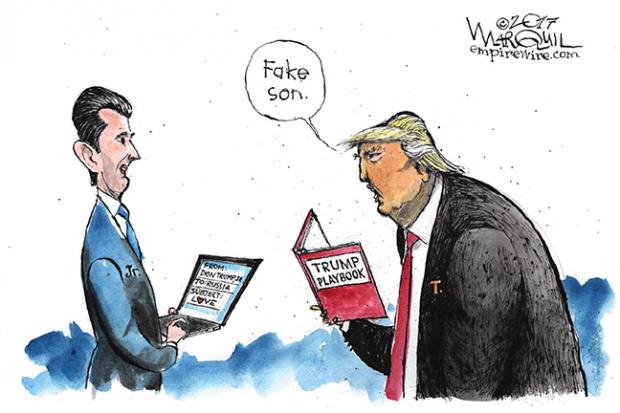 No, not the one where a heart ought to be.

Donald Trump has less attention span than a stalk of grass and he does not read. Nothing he has said, either in his campaign or in his six months in office, suggests he has any idea of the structure or method of government. He doesn’t know the difference between an executive order and legislation. His working vocabulary is smaller than a six-year-old child’s, and, when he’s not scripted, it consists largely of adjectives, mostly superlatives. The word he uses most, other than “I,” is “very.” He often uses it three or four times in a single sentence. He frequently repeats a phrase two or three times, as if he didn’t know he thought it until he heard the worlds spilling from his mouth, so he then tells us what he just heard himself saying, then says it again to indicate his approval.

He is driven by a desperate need for adulation and approval, which is why the Saudis placed huge billboards proclaiming his praises along his motorcar routes; all were gone as soon as he left. In return for the flattery, he turned against Qatar, site of the most important US military mission in the region.

His handshake is perhaps the most pathological handshake in public life. Usually, he grips the other man’s right hand with his own and yanks it forward; sometimes, he puts his left hand on the other man’s wrist, to increase his advantage. The most bizarre televised handshake thus far was on July 14, when he held on to French President Emmanuel Macron’s hand for 24 seconds, moving it back and forth, like a teenager who cannot stop jerking off.

Little wonder that he makes great fodder for our best comedians. Steven Colbert, who was sinking into late-night banality after his move to CBS, took new life once he had Donald Trump’s follies for the basis of his nightly monolog. Likewise John Oliver, Samantha Bee, and Saturday Night Live, particular guest host Alec Baldwin.

But the Trump administration is no joke. Even though the Republicans, now in full control of all three branches of government, have thus far been unable to pass any significant legislation, real harm has been done. There has been substantial deregulation: Our environment is more toxic than it was a year ago, and it will grow more toxic as that deregulation continues. His major appointees are almost all dedicated opponents of the agencies they are running or areas they are supposed to protect: Betsy Devos opposes public education; Jeff Sessions is starving the civil rights division in the Department of Justice in favor of an all-out crusade against medical marijuana; EPA Administrator Scott Pruitt denies the significance of greenhouse gasses…it goes on and on. The Trump administration has placed a fox in just about every henhouse in government.

Things are so bad that Walter M. Shaub, Jr., the US ethics chief resigned because no one in a position of power in the Federal government cares about ethics. “It’s hard for the United States to pursue international anticorruption and ethics initiatives when we’re not even keeping our own side of the street clean,” he said in a July 17 New York Times interview. “I think we are pretty close to a laughingstock at this point.”*

Trump just does not care. The Republican Senate and Congress just do not care. Trump lies incessantly, has no sense of ethics, and no capacity for shame. He never admits error. Most members of Congress are so terrified of a primary fight, they opt for silence. There are just about no real conservatives left. I’d say that they’re just whores, but I don’t want to insult whores, most of whom have some principles and all of whom work hard for a living.

Trump performs like the ultimate Manchurian candidate, the perfect clean bomb. Not a building is destroyed, not a life is deliberately taken, but the United States sinks deeper into global irrelevancy faster than it would under a barrage of offensive, visible weapons.

There are two ways to regard the Trump administration, both of which I think are right. The simpler is to assume profound incompetence, narcissism, venality and lunacy. The more complex is to assume purpose and design. If the latter, whose purpose? Whose design?

Some commentators postulate Russia. That is unlikely: Getting orders and carrying them out is a complex affair, and so is keeping such things secret. Russia clearly wanted Trump rather than Clinton and apparently did everything in its power to help him win. But, in all likelihood, Putin wanted him in not because he’d be a good puppet, but rather because he’d be an incompetent president.

I’ve found few people who think Trump capable of doing this much damage on his own. You have to know where to place the charges to make the bridge fall down. As is evident from all his extemporaneous remarks, he knows almost nothing about anything. His book The Art of the Deal, someone recently pointed out, is really a book about failure: The only enterprise in it that didn’t go bankrupt or otherwise fail was the ice skating rink in Central Park. His genius was getting other people to pay the bills for his failures.

Physical scientists often infer the existence of an invisible body by the movements of actions of bodies that are visible. Planets have an eccentric orbit, so astrophysicists infer the presence of a body whose gravitational field distorts what would otherwise be a circular orbit. Eccentric movements of distant stars implies the presence of a black hole, a body whose gravity is so dense no light is capable of escaping, so it is invisible.

Imagine a secret member of the cabinet and an invisible department of the government. Maybe it’s directed by Steve Bannon, one of the few people from whom Trump takes advice. Perhaps there are others. Whoever they are, they don’t give press conferences, they’re rarely seen, and, thus far, they haven’t provided the White House leakers the kind of information needed to push them into the spotlight.

MSNBC describes the Trump White House as chaotic. It isn’t. Chaos exists only in the absence of order. When there is pattern, there is structure; when there is structure, there is order. The Trump administration has both order and pattern, but it is not the one we—the reading public or the press—assume drives governmental operations. At this point, nobody other than the inhabitants of Trump’s Black Hole know what that order is. On the basis of what we’ve seen thus far, there is one thing about which we can be certain: their mission is destruction of the America we know.

(Two excellent novels explore the possibility of what is now going on in the United States: Sinclair Lewis’s It Can’t Happen Here, 1935, and Philip Roth’s The Plot Against America, 2004.)

Bruce Jackson is SUNY Distinguished Professor and the James Agee Professor of American Culture at the UB.