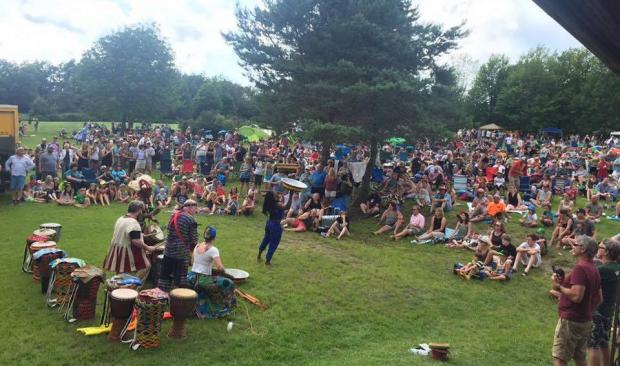 Visiting Africa changed Griffin Brady’s life. It was after his trip to Ghana that Brady decided to launch the Sly Boots School of Music as a student at Fredonia in the early 2000s. Inspired by his then mentor and now working partner, master percussionist Bernard Woma—who runs the Dagara Music Center in Ghana—Brady set out to create a music school modeled after his teacher’s, a place where he could bring in cultures from all around the world and create opportunities for artists to come and display their drumming and dancing. And that’s what he did, with the Sly Boots School of Music. His first step was to bring the Saakumu dance troop to the United States from West Africa, which he did—the group is now the resident dance company for the school. His vision then turned toward creating his one-of-a kind world music festival, which he calls Sly Fest. This week we talked to Brady about the history of the festival, now in its 12th year and returning to the Great Blue Heron festival grounds for the second year in a row August 11 through 13, and about his plans for the future.

How has Sly Fest evolved over its 12 year span?
In 2005 I was playing in a jazz fusion group called On the Sly, and we launched the first Sly Fest that year after I got back from Africa. That’s when I started the Sly Boots school in the barn in the back of our house in Fredonia. We did three years there at the house we were renting. It was kind of like a college party. By Sly Fest 3 I had saved up enough money to put some things in line—I enrolled in a masters program at Goddard College and I designed my whole degree around bringing 15 members of the Saakumu dance troupe from Ghana to the United States for the first time ever, in 2008, which was right when we came into Sly Fest 4 at the North Fork Music Park. We did Sly Fest 4, 5, and 6 at North Fork, branching out and bringing in some of my favorite musicians—the Slip and Marco Benevento, and One World Tribe. We were really starting to reach out into the world music and jazz niche—not giving people a show that’s like every other show of the summer, but giving them a real different kind of festival experience always centered around drumming and dancing. Then the North Fork Music Park shut down after Sly Fest 6, so that was kind of a big transitional year for us. We moved to the Griffis Sculpture Park, and of course they don’t allow camping, so we began to scale the event down to be a one day event and just be a fundraiser, because these things are a labor of love—they seldom make money. In 2010 we started to bring groups to West Africa to Bernard’s school in Ghana. We scaled down the festival size but we ramped up the cultural component in opening up the exchange. The dance troupe continued to come back to the United States every year, since 2008.  When the opportunity came up for Sly Fest 10 it was kind of a rebirthing opportunity. We had someone from the community come forward and give us an anonymous endowment and we were able to invest that back into the community and bring Kaki King and Bernard Woma and Cyro Baptista to come and support the event for number 10, and we did well. It was kind of like year one all over again. In each place we’ve had to recreate a rhythm, and this last year we changed venues and went to the Great Blue Heron to open back up to camping and to expand our reach and work to fit with their demographic. There is a big drum community that already resides at the Great Blue Heron. So there’s a target audience there who maybe doesn’t even know the magic that our organization has in store for them.

Why is percussion-based music and world music so important to you?
Before blockbuster movies and big-time entertainment, there was the drum. The drum is the original storyteller, the passer of culture, the perpetuator of all things artistic. No matter what corner of the world you go to, they might have completely different tonal structures, completely different insturments, even completely different drums, but the drums are there and percussion is there. The rhythms that create this existence are mimicked and mirrored and honored through rhythms. That is one of the underlying things that pulls us together as humanity and trumps…[he laughs] never mind trumps, I won’t even say trumps…but it really has the ability to make all of the other differences seem small. They say that music is the universal language, well drumming is the alphabet.

For this festival I think one of the unexpected gems might be DJ Logic. I think that  some might not realize that a musician like DJ Logic can be extraordinarily rhythmic, though he’s DJing.
DJ Logic is one of these guys who has been able to reinvent himself and his sound over and over again. If you look at the long list of people he’s collaborated with they’re some of the greatest drummers on the planet. It’s not by accident. He’s got a wonderful ear and flexibility. We’ve never had a DJ featured at Sly Fest, because the nature of the event is centered around drumming and dancing and a kind of return to your root kind of thing, but DJ Logic has got that something special. He’s perfectly applicable to the scene because he can reinvent and make it accessible to any audience regardless of taste.

How does your appreciation of world music and African music affect your choices for the lineup, which includes also jam bands, folk bands, and funk bands?
The underlying thing that ties it together is here we are in America and America is a big part of the world. We’ve got music that was born right here in the United States that is just as important and viable as any other culture. We want to have that represented and celebrated in addition. We don’t want to be “us and them,” we don’t want to be apart, we want to be together. Jazz music, funk music, folk music, Appalachian music—all of this stuff has a place in the Sly Fest community.

What is the biggest challenge of doing this festival each year?
Funds. Money. We do our event on a shoestring and we it because so many people come to the table willing to perform or provide services for less than their normal rate in order to help support the cause. If they didn’t do that, we would never be able to survive. It’s really a labor of love and a labor of the whole community together.

What are your goals for Slyboots School of Music and Sly Fest?
The goal is to create a community resonance and showcase the work that we do around the country and around the world. Sly Fest is an opportunity to bring to our community what it is that we’re doing. The Saakumu troop has continued to come back to the United States every year, since 2008. We’re just about to embark in our 11th international tour together in November. Each year we reach over 40,000 students at colleges, universities, elementary schools, high schools all across the country. We’re working to renovate this church in Buffalo. We renovated a building of our own back at Sly Fest 7, 8, 9, and 10, we were working through transitions of finding a brick and mortar home here in Buffalo. We’ve gone through a lot of different phases, a lot of different evolutions, teaching drum and dancing classes—at Canalside, at 700 Main Street, at the Yard, at Shakti Yoga, at Ashker’s on Main Street, at Verve Dance Studio, basically anywhere we can gather and put on a class. We’ve been doing a Tuesday drum and dance class for like six years running. But it’s been at a different place because as we renovate buildings and owners sell the buildings, we’re just trying to get a foothold here in Buffalo. So this opportunity at the church is really a serious marker to show that we’re on the right path and that the community is responding. This opportunity to open up a real world-class venue for music and dance education, specifically world music and dance education is unprecedented and exactly the opportunity we’ve been working toward.

How would you describe the current state of Sly Fest?
Now we’re at a stage at Sly Fest where we’re kind of shifting the focus and it’s not so much just an awareness raiser or a platform for marketing and creating a brand—the community knows what we’re doing—and now Sly Fest has been thrust into the responsibility of becoming our fundraiser. Our big annual opportunity for the community to come out and show their support for the work that we do and help us to manifest our spot at this Richmond Ferry Church. We are embedded into the non-profit that runs the church program, which is called the Rosanna Elizabeth Foundation for the Arts, which is a nonprofit that runs the church program. All Sly Fest sponsorships and donations are passed through that organization. We’ve been doing this thing for a long time, and now people can directly have impact on the future of it. Do want to see that church come back to life after 25 years of sitting there and doing nothing? Come out and support this events and the proceeds are going to the Buffalo World Music and Dance Academy, the new evolution of Sly Boots in our time and place. I lost my mother in February and she lived with an undeniable passion for going out and living every day. Carpe diem, she’d tell me every day. If you were to leave this earth tomorrow, you’re not bringing any of your money or riches with you, you’re going to leave an impact, and what that impact is is completely up to you. Now I’ve got a baby boy who was just born a year ago. Life is changing for me in a big way. I’m a very different person now than I was 12 years ago when this journey began, but the emerging man out of all of this is still optimistic, is still hopeful, and is still believing wholeheartedly in the nature of persistence, to allow this passion that’s been driving me to take center stage at Sly Fest and inspire people.

What’s your favorite part of the festival each year?
Each year it changes. Each year has something special about it that will stick with me in my memory. Seeing the kids is one of the big things now especially now that I have a little boy. Looking back at the pictures of Sly Fests past, seeing the families and seeing the intrigue and curiosity and the joy. It’s such a magical experience for everybody, but for the kids especially.