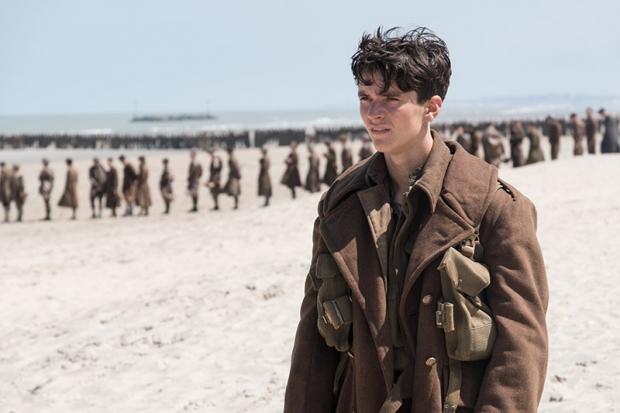 Filmmaker Christopher Nolan (The Dark Knight, Inception) recently told the New York Times that he didn’t want his new picture, Dunkirk, to be “a typical war film.” “We’re trying to disturb the established rhythm of these war movies,” he said. It’s obvious he eschewed the usual massive scope of the big star-studded 1960s and 1970s cinematic recreations of Second World War battles and campaigns (Midway, Battle of the Bulge), to get something more personal and visceral amid a great, historic situation. He came closer to his goal than I anticipated, even if his aim went astray now and then.

Dunkirk is about the famously and heroically improvised rescue of more than 400,000 British and Allied soldiers from their entrapment by German forces at the titular French seaside city, and elsewhere on the French coast, in May and June of 1940.

If any event in the history of warfare recalls extraordinary and courageous effort it’s this one, which the Brits dubbed “Operation Dynamo.” Most memorable is the emergency civilian supplement to the military’s operations, as a ragtag variety of 900 craft—tugs, fishing boats, barges, weekend sailors on their recreational boats—sailed across the channel to pick up the trapped soldiers. It’s an extraordinary story. Nolan has made an honest effort to capture it in a more intimate mode than is found in many war movies, although Dunkirk isn’t as unusual as he and others, including journalists, have been indicating.

Oddly, despite its hallowed place in history, these events have been almost ignored by the movies, even by the British. (I know of only three that treat it even incidentally, one of them the sentimental American war-era inspirational melodrama, Mrs. Miniver.)

Nolan’s approach (he wrote as well as directed) was to weave together three related narratives, each centering on a very few individuals, in order to give immediacy to his depiction. One follows the harrowingly challenged efforts of a very young solider, Tommy (newcomer Fionn Whitehead), to escape from Dunkirk. A second picks up the experience of a middle-aged civilian (Mark Rylance) who embarks on his small yacht, along with his adolescent son and a neighborhood kid, to pick up soldiers. The third focuses on a pair of RAF pilots (Tom Hardy, Jack Lowden) as they try to shoot down the German planes strafing the massed soldiers on the beach and the rescue craft.

Tommy’s grim adventure is the central, or through, story but the three Dunkirk-bound civilians’ is the most poignant and assimilable, both for its modest scale and eventually tragic element, and for Rylance’s muted but convincing performance.

The other two sub-narratives, particularly Tommy’s, have some stunning scenes and shots, but they’re both more complex and more remote. Nolan and cinematographer Hoyte Van Hoytema impressively capture vast land- and seascapes (with the aid of computer imagery) but it’s clear Nolan wanted an intimate, in-close portrayal of these epic events. Much is being made of his cutting from one story to another and back, but such cross-cutting goes back at least a hundred-plus years to D. W. Griffith. (Everything old is new again?)

Despite his successes, there are lapses and vagaries. The action can be hard to follow, even perplexing on occasion. The movie doesn’t bother with instructive preliminaries; from the get-go it has an urgent in medias res flow, presenting an audience with events already under way.

And it can be misleading. The two RAF pilots seem almost isolated, although the British lost 177 planes over several days in trying to protect the beaches. And Dunkirk is of little help in understanding that valiant, desperate and doomed French troops kept the Germans at bay long enough for the Brits and their Allies to escape.

But Nolan obviously wasn’t interested in being didactic. He wanted immediacy and intimacy in a hellish, if beautiful setting, and he’s been notably successful in accomplishing this.

If you don’t like war movies, this one may be an exception for you.