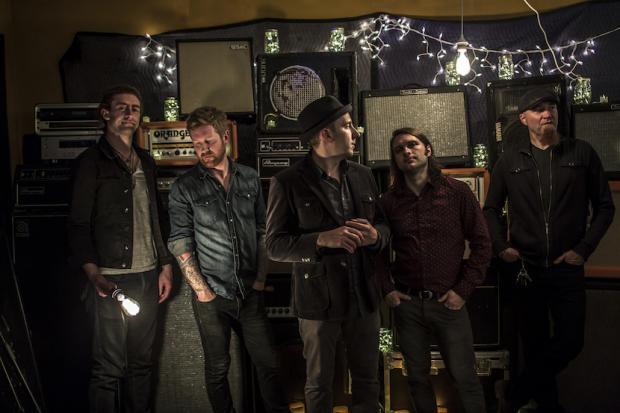 After less than a year together, First Ward, an indie rock band full of heavily experienced local musicians, are starting to make some moves. They’re wrapping up recording of their debut EP and looking forward to some pretty big shows this summer, including a slot on the Cobblestone Live music festival as an opening act for the critically acclaimed Canadian indie rock band, Broken Social Scene.

Today I’m meeting with First Ward’s Josh Mullin and Zak Ward—bassist and guitarist respectively. We’re at Lockhouse Distillery in the Cobblestone District, not far from the Old First Ward neighborhood—the partial name sake of the band—and within view of the outdoor concert area where the band will perform as part of the Cobblestone Live music festival. The band includes a whole bunch of experienced local musicians; Ward, who has played in indie rock band Son of the Sun among other bands; bassist Mullin, formerly of the popular Buffalo-based rock band Last Conservative; keyboard player and “Swiss army knife” Kevin Sampson of the Innocent Bystanders, the Jealous Unknowns and probably a few other projects too; guitarist Dave Harris, who they call “the Kid”—a semi-recent transplant to Buffalo; and drummer Jeff Schaller, a prolific drummer involved in many local bands, right now most notably the 1990s rock cover band Soul Patch.

“We’re super excited about it,” says Ward about their upcoming festival slot. “When Cobblestone came out last year, we weren’t quite ready, so as soon as we knew it was coming back this year we were on it. They gave us a great slot and a great shot, so hopefully we can put on a good show.”

Ward is a full time musician who comes from a family of artists. His parents owned a theater and he grew up as an actor.

“The line of art and work has always been blurred for me, he says. “It was always like, yeah, you do your art and you get paid to do it—you don’t get paid well, but you figure it out. I’ve never been good at anything else so I’ve been slowly conditioned into this lifestyle,” he says.

His latest band formed after the demise of his former band, Son of the Sun.

“I spent like two years trying to figure something out after that,” Ward says as he sips from a mini Miller High Life pony.

Nothing happened. Naturally, as soon as he was ready to give up, things started coming together. He got a message from Mullin about starting a new project. They began to work together, with Mullin originally on drums. Eventually Mullin moved to bass and they brought in drummer Steve Tripi, now of the Eaves, followed by drummer Pete Metzler, and finally Schaller. Ward makes a reference to Spinal Tap, though none of their drummers exploded into a flash of green light.

“Our fun, creative guitar player Dave wandered into my living room kind of on accident and started noodling on guitar,” says Mullin. “I said, ‘think I found our guy.”

The beginning of 2018 is when they really started to settle into a permanent line up, with Sampson on keyboards and backing vocals. Everything about the band has kind of fallen together, they tell me.

They started off the year with a pretty big show, opening up for the Trews at the Town Ballroom. Obviously, any band likes to play a big show, but this particular band not only likes it, but seems to thrive in such situations. Where some bands might fold under the pressure, they tell me that they find the big stage more comfortable than, say, a small stage where they’re playing in front of a few friends and family.

“I’m terribly awkward in social situations. I’m way more comfortable on stage,” Ward says. “We like big shows because it’s difficult playing for nine people who all know you. When you’re performing, you shouldn’t be thinking. When I see someone I go ‘oh, that’s John.’ It pulls you out of it for a second.”

Mullin has his fair share of big show experience too. In Last Conservative he played arena shows, even opening for Bon Jovi here in Buffalo.  “I feel more comfortable on stage than I do in this very moment,” Mullin says with a grin. “That’s when my brain stops spinning and it becomes all instinct.”

The band recorded their yet to be released debut EP at a studio called Temperamental Recordings in Geneseo with producer Mike Brown. The recording studio is located in a 190-year old Methodist church.

“It has a collection of thousands of instruments. When I told these guys about it I said: ‘this guy’s got a menagerie that we have to go check out.’ When you walk into it it blows your mind,” says Ward adjusting his black pork pie hat.

They really consider themselves a live band first, and that’s evident on the band’s demo, Live at Raven.

“We went to do a video shoot and we thought it would be cool to have all of our friends shoot a video. Turns out none of our friends know how to shoot video, says Ward as he shows me the proper way to do it with his own cell phone. It’s horizontal. Record horizontally.

Zak and Josh spoke with Cory from @publicbflo for our upcoming set at @cobblestonelive at one of our favorite places @lockhousedist . Sipping on fine beverages always makes the interview go well. #highlife #firstwardmusic #dailypublic #cobblestonelive2018 #livemusic #allthesmallthings

The friend whose house they were recording at set up a few mics just for the fun of it and the recording turned out great.

“We weren’t even planning on recording audio for that, says Mullin. “It turned from a video shoot into a demo session.”

One of the highlights is a song called “Lost,” a dreamy indie rock song, which Ward says is in one way about not being sure where you’re going in life, but in another way is about the very modern idea that, because of technology, it’s almost impossible to be truly lost in a physical sense.

One of the mottos of the band, Ward tells me, is to make the most with the least.

“I play music full time, Jeff plays in five or six different bands, Josh is always running around, he works for every bar in Buffalo essentially.”

Mullin is on his phone right now, actually. He check his phone regularly during the interview, but not in a rude way. More in a, this-is-necessary type of way.

“I’ve become incredibly good at multi-tasking and it’s horrible,” he says. Mullin is the general manager of Thin Man Brewery and they’re opening a new back yard bocce ball court tonight. He wants to make sure everything is in its right place. Ward is also on tap to perform a solo set at the brewery, which seems to be a regular occurrence. He’s got his acoustic guitar on his back in a soft black case sitting next to him as we chat.

Ward’s comment about doing the most with the least leads us into a conversation about the band’s ideals, their philosophies, and their values.

Having to work in small windows of time can have their pros and cons. It’s nice to have more time to work, but having limits “distills” their creativity into a more potent form.

“It forces us to be efficient,” says Mullin. “We want to play music more than anything else. We want to be in a band that plays at a professional level.”

As previously mentioned, there’s a lot of experience in this band—they’ve toured, recorded, played shows big and small, so they know how to buckle down and get work done. At the same time, even though a few of them are career musicians, the band is as much a refuge from every day life as it is “work,” which, of course, neither of them want to call it. But going through the ups and of three or four bands and going through three or four bands worth of band drama, Ward has learned a few things.

“There’s this thing that happens when you’re a musician and you go on tour and you put it all on the line and you get close to something and then it falls apart. Then you pick yourself up and you do it all again. Then it falls apart again. That’s where we’re all at. So honesty, and sincerity are keys for us,” he says before finishing the last sip of his beer.

“I’m 36, I’m not an old man, but there’s a lot of dudes that have been in two or three bands that thought they were going to get signed and had all these big plans and then nothing happened. They’re bitter, they’re angry. They don’t want to do it again. I know guys who put their guitar down after that happened. That’s the biggest thing it’s taught me, is just keep working.”