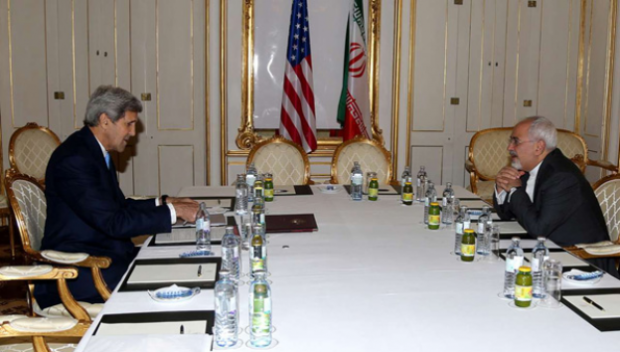 Economic sanctions have been known to work in the past. We punished the South African apartheid government with sanctions, and that helped bring about change. Burma had suffered under sanctions for years until it decided to re-join the world community a few years ago. We sold Pepsi-Cola to the Soviet Union, and communism fell in 1991. Sanctions haven’t ousted Cuba’s or North Korea’s regime, nor did they prevent North Korea from obtaining nuclear weapons.

We’ve been engaged in a cold war with Iran since the 1979 Islamist coup that overthrew the Shah, and the subsequent hostage crisis. Even Ronald Reagan didn’t go to war against Iran, choosing instead to fund and supply Saddam Hussein in the Iran-Iraq war, and ultimately to illegally sell arms to Iran and use the proceeds to fund the Nicaraguan Contra rebels. Yet after all that, Iran is still a theocracy led by mullahs, and Sandinista Daniel Ortega is back in power in Nicaragua.

Sanctions have had a negative effect on Iran, and they have not been one-sided since the US teamed with China, Russia, Germany, the UK, and France to engage Iran in negotiations over its nuclear ambitions. It was the sanctions that brought Iran to the bargaining table. After months of negotiations, there is a treaty that will gradually lift sanctions in exchange for Iran agreeing to shut down — or at least delay — its pursuit of a nuclear weapon. This is no small thing — our refusal to engage Iran only emboldened it to grow its nuclear program by leaps and bounds over the last decade and a half.

This Fox News “analysis” finds that 70% of Iran’s nuclear enrichment capability came about while Obama has been President. But it isn’t about us - it’s been growing steadily from zero in 2000. Calling Iran part of the “axis of evil” and imposing sanctions barely put a dent in their plans. Confronted with this reality, we have two choices: war or diplomacy. The US and its negotiating partners chose the latter. War, as we’ve seen — not learned - in Vietnam, Iraq and Afghanistan, can be as ineffective as it is blood-soaked.

The Iranian government is no friend of the United States. Neither, for that matter, are China or Russia. But Germany, France, and the UK are, and two of those allies are run by conservative governments. The proposed Iran deal doesn’t contain everything the United States wanted, but Iran walks away having made concessions, too. That’s the nature of diplomacy and negotiation — everyone gives up something, everyone walks away somewhat disappointed.

But now we have the spectacle of the American right taking up common cause with Iranian extremists, united in the notion that this deal is a colossal disaster. The new, ultra-right Israeli government is opposed because it says the deal doesn’t go far enough, yet the only alternatives are status quo or war. Israel is under constant threat from Iran, and is surrounded by enemies, some of whom are funded by Iran. Others have complained that the Iran deal doesn’t free American prisoners or other tangential concessions. This is true, but what recent history has shown us is that bringing a malefactor in from the cold can have a moderating effect on its behavior.

For as long as the US has maintained an economic embargo against Cuba, that island’s Communists have been able to use that as an excuse for its own failures, and as a rallying cry to perpetuate that aging revolution. Now that relations with Cuba are slowly being normalized, Cuba becomes less isolated, less able to cast blame on discontinued scapegoats. Change might be hastened through engagement. The Iranian people showed the world a few years ago that they are eager for freedom and democracy. The simple fact is that Iran has the potential to be a stabilizing force in the Middle East. Obviously, we have a very long way to go before that might happen, but we’re already informally aligned with Tehran in the fight against ISIS, especially in Iraq, which has effectively become an Iranian client state. The enemy, after all, of my enemy is my friend.

The neoconservatives’ thesis was that overthrowing Saddam Hussein would help to stabilize the Middle East and improve Israeli security. We got the exact opposite result. The Arab Spring’s other short-term successes have also generally turned into catastrophic failures, with few exceptions. The problem is that these countries — these peoples — have never known what it is to be a free democracy. All of them have been colonized and oppressed, manipulated and beaten into submission. What military might and the secret police couldn’t accomplish, religious extremism filled the gaps. During the cold war, we’d align ourselves with whomever opposed the communists, including religious fanatics. Engagement with Iran and verification of compliance with this treaty can lead to serious, perhaps productive discussions about not only American prisoners in Iran, but also Iran’s behavior as a regional power. Iran, after all, isn’t Iraq. It’s far more advanced, much more diverse, has an exceedingly different history.

I harbor no illusions that this deal with Iran is going to further moderate that country’s regime, nor that its hostility towards Israel will diminish, or that it will become some overnight good international actor. Not that these things are impossible — just unlikely. I also don’t trust the Iranian regime any more than I trust Putin’s Russia or the PR China. However, we have diplomatic relations and engage in negotiations with myriad governments and states whom we don’t especially like or trust. We have an opportunity here to at least partially set aside two generations’ worth of existential hostility and take a small step towards building a more stable Middle East — one less threatened by a putative nuclear Iran tomorrow than yesterday. It bears mentioning that, even with this deal, the US will maintain its own trade embargo and sanctions until Iran stops exporting and funding terrorism.

I’ve just been speaking to @BarackObama about the historic Iran nuclear deal, as well as our commitment to spend 2% of our GDP on defence.

An economically crippled Iran is a threatened Iran, and what better way for it to perpetuate its own aging revolution than to export war and misery in the name of Allah? The notion that tightening sanctions would force the Iranians to give more ground is ludicrous; the suggestion that we back it up with a threat of force — no matter how vague or specific — is even worse. After all of these negotiations with the permanent members of the Security Council, plus Germany, in what way does it advance American interests to jettison this deal? It would effectively mean that the United States does not negotiate in good faith and cannot be trusted — exactly the thing we accuse the Iranians of doing and being. If the UK’s Conservative PM David Cameron is on board with this deal, what possible reason would there be for an American conservative to be opposed? Seriously, if Angela Merkel — who just brought Greece to its financial knees — if on board, how is this some sort of appeasement? The Economist explains,

… the problem faced by those who would like to see the deal collapse is that they have yet to offer any attractive alternatives. Ordinary Iranians are desperate to get back to having a normal economy, while American voters have little appetite for going to war with Iran to prevent it getting a nuclear weapon. According to a Washington Post-ABC News poll conducted just before the agreement on April 2nd was announced, Americans support the notion of striking a deal with Iran that restricts the nation’s nuclear program in exchange for loosening sanctions, by a nearly two to one margin.

And this, from the Atlantic,

In 1943, Walter Lippmann wrote that “foreign policy consists in bringing into balance, with a comfortable surplus of power in reserve, the nation’s commitments and the nation’s power.” If your commitments exceed your power, he wrote, your foreign policy is “insolvent.” That aptly describes the situation Obama inherited from Bush.

Obama has certainly made mistakes in the Middle East. But behind his drive for an Iranian nuclear deal is the effort to make American foreign policy “solvent” again by bringing America’s ends into alignment with its means. That means recognizing that the United States cannot bludgeon Iran into total submission, either economically or militarily. The U.S. tried that in Iraq.

The risk of an Iran re-introduced into the world economy is that it will use that to wreak more havoc throughout the region. On the other hand, there is a possibility that it will moderate its rhetoric and actions, finding that it’s easier to govern when your people and their economy isn’t weighted down by sanctions. No one says Iran will become a responsible international actor overnight, or for that matter, ever. But without a deal, Iran will have a nuclear weapon practically on-demand. With a deal, that will not be the case. An Iran without nuclear weapons is preferable to the alternative.