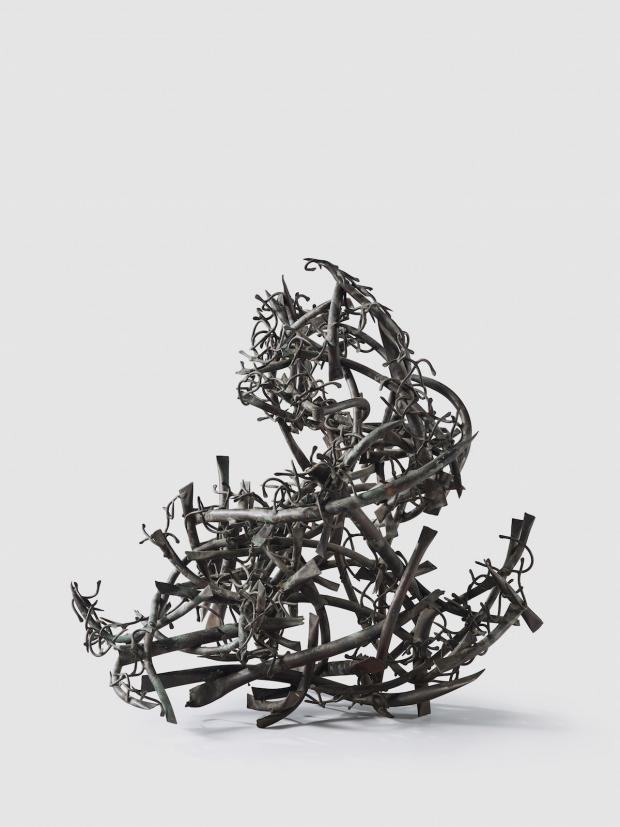 We normally think about sculpture as three-dimensional volume in space. Artist Claire Falkenstein thought about it more as space itself. Or really, space-time. As cosmologists during the past century formulated thought about the physical universe. The current show of her sculptural and other genre art at the UB Anderson Gallery is called Time Elements.

Her preferred term to talk about her three-dimensional works was not “sculptures” but “structures.” Much as we talk about the structure of the universe.

The works on show include sculptures and framed wall-hanging items including paintings and complicated embossed etchings or lithographs.

The sculptures are mostly composed of what look like scrap segments of copper tubing and copper wire of various sizes and gauges—all deeply patinaed to rich reddish brown hues—wired and welded into three-dimensional structures, sometimes with dollop additions of what would have been liquid to viscous state glass at the time of application, now hardened and intermingled and coalesced with the copper materials as primarily a striking visual element but also structural further bonding element of the copper basic components.

Art world or real world formal or conceptual referents to Falkenstein’s works are hard to come by. Attesting to the unique originality of the works, but also making it hard to say just what she might have been trying to communicate with the works, beyond formal uniqueness. But the space-time idea—as difficult as that idea is to try to grasp in itself, and imperfect as any visual representation of such an abstruse idea must necessarily be—keeps recurring.

Three sculptural works near the beginning of the exhibit with seeming affinities—all are composed of just networks of copper wires, no tubes, no glass—seem to relate to each other as variants of the space-time idea. Two are on low pedestals, one is suspended overhead. The suspended overhead piece is vaguely evocative of a cast fisherman’s net outspread in mid-air momentarily before dropping into the water, but also of two-dimensional elastic sheet drawing representations of the multi-dimensional—four dimensions at least—cosmic space-time situation. Grid networks to illustrate—albeit imperfectly—space-time curvature effects—depressions, distortions—of gravitational cosmic bodies. Stars, planets, galaxies.

Other sculptural works include sundry dense tangle arrays of copper tubes and wires and occasional added glass or small stones, as possible variations on the space-time and sculpture as enclosed space themes. Plus two very different manner and materials works, consisting of bamboo poles and segments of canvas, though again in tangle arrangements. Evocative of wreckage remnants of South Pacific waters primitive sailing vessels. Which is apparently not how Falkenstein thought of them, however, based on the titles she gave them. In the one case, Battle of Little Big Horn, in the other, Emblem I.

Wall-hanging works include a series of etchings plus embossment effects in a range of print element modes from overall murky black to virtually non-printed matrix paper white, and embossment effects from multiple concentric circles to idealized roadmap networks to chaos assemblages of wire segments and snippets. And paintings in oils and acrylics, featuring torrent displays of cuneiform morphing to teardrop markings in overall patterns ranging from raw energy dynamism to paisley forms. And series of India ink on paper drawings featuring similar cuneiform to teardrop markings in similar exotica large-scale patterns.

Another sculptural series consists of seven small table-top works of just copper tubing segments—usually four to six segments per piece, in apparent haphazard jumble arrangements—and generous dollop added glass, but not so as to threaten the visual and emotive dominance of the darkly patinaed copper tubing. Somewhat evocative of Chinese ideograms. That we may not understand the meaning of, but recognize as language, a system of communication—the ideograms and the artworks alike—whether or not we understand what they mean. Or better, to whatever degree we understand.

The table-top sculptures—that evoke ideograms—could stand as a fit metaphor for Falkenstein’s work as a whole.

Falkenstein was a significant figure in 20th-century American and indeed world art, particularly regarded for the wide range of her experimentation in a broad range of media. She worked in California—San Francisco area—in the thirties and forties, Paris in the fifties and sixties, then back to California—Los Angeles area. She died in Venice Beach, California, in 1997, age 89.