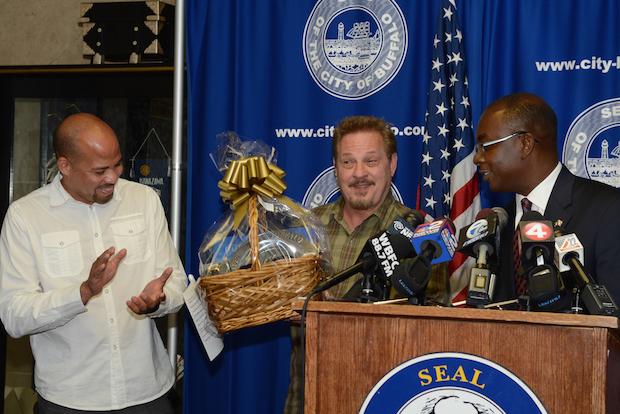 On Thursday, July 16 (perfectly-timed #716day) in his chambers, Mayor Byron Brown welcomed director and screenwriter Fred Olen Ray back to Buffalo as he begins filming another feature movie through the end of the month. At the beginning of the afternoon press conference the mayor delcared the day “BuffaLove Day.” This past winter Olen Ray shot “Small Town Prince” largely in the Southtowns – and fell in love with the region, what he glowingly refers to as “the world’s largest back lot.” The new film, part of the city’s “growing film industry,” is entitled “The Trial,” with an “Anticipated release of 2016,” says Brown. “This year we had eight feature film productions in Buffalo, 215 productions days that exceeded ten million dollars of revenue – and nearly five thousand hotels rooms booked.”

Taking the podium, Olen Ray thanked the Mayor, the city/prospective extras, and Buffalo Niagara Film Commission. He talked about his “Twelfth-hour decision to come to Buffalo looking for snow (for “Small Town Prince”). We found it, a lot of it,” adding “When I had a chance to make another movie, I wrote a movie that couldn’t be made anywhere but Buffalo. So here I am again.” The movie, “A woman’s thriller,” was inspired by an incident at an airport, Olen Ray says. The plot focuses on the narrative possibilities of a traveler picking up the wrong suitcase: “The repercussions are terrible,” the director says, ominously. At the 7/16 press conference Olen Ray revealed that he is writing a third Buffalo-based movie, “A werewolf movie set at the (Ward) pumping station,” citing the early and picturesque sunsets of autumn as inspiration, in part. “My greatest fear is that my competition will discover Buffalo.”

The production is seeking a few hundred extras for the two weeks of filming; interested parties should email the production office, (include a current selfie) putmeinthemovie@gmail.com.