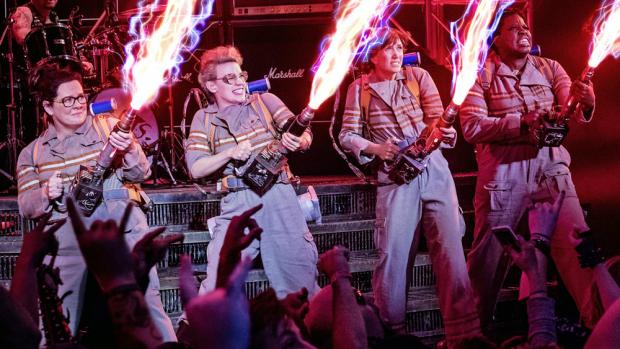 Landing the plum assignment of rebooting Ghostbusters, the writer-director realized that he was dealing with a product that a lot of fans held dear. It was up to him to find a way to revive the franchise in a way that respected the original without slavishly remaking it.

And he succeeded admirably, borrowing just enough from the 1984 film (written by Dan Aykroyd and Harold Ramis) and twisting the elements in clever ways. To prove that the line of succession was peaceable, he enlisted cameos from every major member of the original cast (sans the late Ramis and Rick Moranis, who left acting 20 years ago).

Was everybody happy? Oh, hell no.

Of course, anytime a movie gets remade, there ‘s going to be some griping about it from the fanboys. But the level of bile that was directed at this one was way off the meter. Earlier this week the imdb.com rating was  3.9. That’s before it was even released. Usually just the opposite is true: pre-release ratings tend to be high because the only ones casting votes are fans who can’t wait to see it.

Why all the hate? You can try reading the comments on imdb and other sites if you have the time and the inclination, but while most of the aggrieved deny it, it probably comes down to this: Girl Ghostbusters. That’s right, Feig and the film’s producers had the temerity to cast the story with four female leads.

Was that stunt casting? Maybe. But if so it was smart. Could you put together a male ensemble these days that would guarantee any kind of opening box office and generate enough chemistry to keep viewers coming back for sequels? Doubtful.

Feig cast Kirsten Wiig and Melissa McCarthy, whom he has worked with before on Bridesmaids, Spy, and The Heat, all substantial hits. To round out the quartet, he added SNL players Leslie Jones and Kate McKinnon, who are arguably the best things about the movie.

It’s hard to believe that so many people could get so upset by something as trivial as this. Then again, it’s hard to believe that so many people are so invested in what was a second-rate movie in the first place, one that skated along entirely on a combination of Bill Murray’s snarky persona (which by 1984 was already wearing thin) and some flashy (for the time) special effects. Second for second, the music video for Ray Parker Jr.’s title song was more entertaining than the film.

Is the new Ghostbusters a masterpiece of film comedy? No, but I have no problem saying that it’s better than the original. It’s sloppy, and doesn’t do enough to work Wiig and McCarthy into their roles. But it’s genial fun throughout. It has a fair number of jokes based on rude bodily functions, true. But there are just as many that zip right past. I laughed at the very first bit of dialogue, a tour guide’s description of a 19th century Manhattan mansion that had such contemporary luxuries as “a face bidet and an anti-Irish security fence.” I love Chris Hemsworth’s explanation of why his eyeglasses have no lenses. (As what Seinfeld once called a “mimbo,” he steals most of his scenes, which is probably why most of a hilarious sequence in which he leads hundreds of zombified New Yorkers in a dance was consigned to the end credits.)

And while it may pass most viewers by, hardcore Gothamphiles will get a kick out of the climactic sequence’s use of long-gone Times Square landmarks, like the RKO National Theater.

Feig, who ought to be revered by fanboys as the creator of the TV show Freaks and Geeks, gets the last laugh on his detractors. In a scene where one of the ‘busters is looking up something on the internet, she is advised to ignore the comments section: “You shouldn’t read what crazy people write online in the middle of the night.” Good advice.