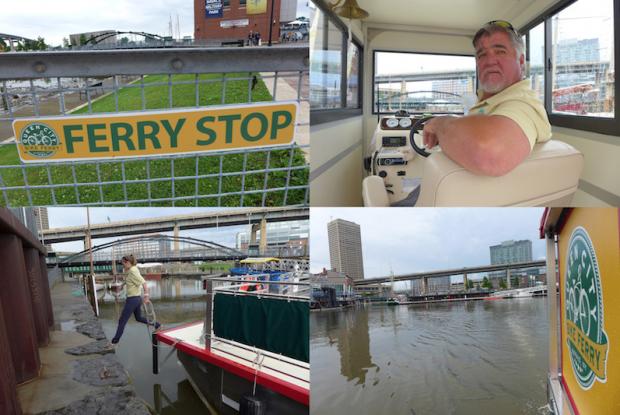 Traversing the Buffalo River daily, a distance at that discreet bend of about two football fields, Queen City Bike Ferry is a welcomed niche-filler on the waterfront. The festively-colored pontoon boat moves slowly from Commercial Slip to the shores of First Buffalo River Marina in less than ten minutes, until eight o’clock in the evening.

On a recent overcast afternoon following some pelting rain, The Public heads to Canalside to board the ferry and profile its crew. It is, after all, a mostly-covered boat and advertises that it runs daily from Memorial Day to Labor Day – which could imply rain or shine. At the wheel is Captain Greg Doxtater; his first mate Leah Voit rushes about tying down the ferry and logs launch/return times, the number of riders, and fees paid ($1.00/ride).

There have been big crowds (people with and without bikes) this summer to ferry across the river so this will be a good opportunity to speak to these two working in public without too many distractions. We talk for a few minutes and, before casting off, three people approach the concrete walkway for a lift – a man, a woman and a young boy.

“Where’s my life jacket?” the woman asks immediately as she takes her seat. Leah, just as an airline attendant does, gives a memorized speech about safety and the locations of flotation equipment. The latter portion of the speech says to “calmly get the attention of the captain” should they go overboard.

Passenger Howard, mid-ferrying, says “This is a great way to see the harbor. For a buck, how can you go wrong?”

Captain Greg, a little on the irascible side, is recently retired from Praxair after “Forty years of service as manager of the eastern liability center. I’ve had my captain’s license for ten years.” When asked about the process of getting a captain’s license he says “You take a course, you take a series of tests, you pass the tests, and you apply to the Coast Guard for a license.” The license, he says, is renewed every five years.

“The guy who taught my captain’s course told me about the opening here and I came down and signed up.” An avowed powerboat guy, Captain Greg says that the ferry will have to drift a bit today to avoid the large amount of wood floating in the river, churned up from the recent rains. First mate Leah describes the flotsam as being “Like a hangover, the night after a storm it’s always worse.”

Without the ferry bike riders would have to cross at Ohio Street for access to the Outer Harbor, about a six-mile ride. The three people on the ferry today ask Leah about the attractions on the other side, they have heard about the new state park. She tells them about Times Beach Nature Preserve, Wilkeson Pointe, and Buffalo Main Lighthouse.

Once on the other side of the river, riders are led to a chain link fence at First Buffalo River Marina where the first mate opens a combination lock. A colorful signpost directly ahead on Fuhrmann Boulevard gives directions to all nearby attractions. The trio is pleased to hear that Times Beach is a ten-minute walk from where they have landed. When they are ready to leave Outer Harbor and head back to Commercial Slip they are instructed to wait (benches are provided) near the fence until a Queen City Bike Ferry first mate opens the fence and leads them to the ferry.

Back on board I learn that Leah has been sailing her entire life, and that she draws daily during her four-hour shifts, elaborate sketches of what she sees going to and fro. Captain Greg, when asked about ferrying, says “I wouldn’t do it if it wasn’t fun.”