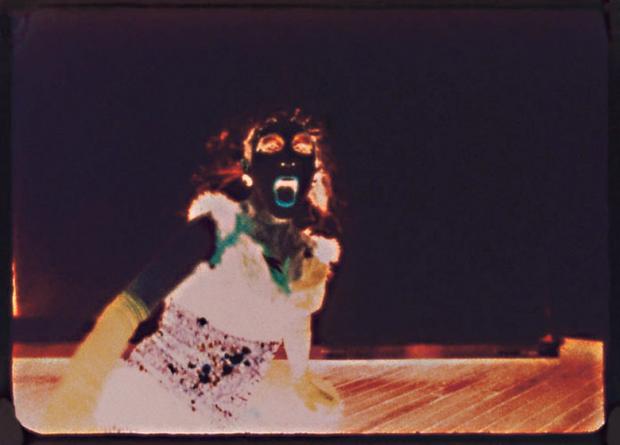 The Lawrence Brose exhibit currently at BT&C Gallery is about what he calls the “prophetic” quality of his film of nearly 20 years ago, De Profundis. The film title is the title of Oscar Wilde’s letter written in jail during his sentence for “gross indecency,” a general and in Victorian England considered more decorous term for various homosexual acts. The jail term of two years hard labor left Wilde a broken man, impoverished, dispirited, and in ill health, and he died within three years of his release, in self-imposed exile in France.

The BT&C exhibit consists—for the most part—of frames of the film greatly enlarged and mounted as still pictures in several series, including a series with specific reference to Wilde’s incarceration. Brose said those pictures—that portion of the film—have taken on newer and deeper meaning to him in the wake of his own legal problems and psychic travail over the last six years, following charges by federal prosecutors of possession of child pornography. The child pornography accusations were ultimately reduced to a single charge of obscenity, to which Brose was required to plead guilty to end the case. He was sentenced to two years’ probation.

Brose’s work presents gay sexuality matters in a notably forthright way, but with at least as much attention to the aesthetics of the presentation as the homoerotic subject matter. The imagery is from found footage gay porn films that Brose then refilmed and reprocessed by unique and aleatory methods that partially obscure the subject matter and create remarkably beautiful color and pattern effects—a little reminiscent of batik dye process patterning and coloring—or from Brose’s own in-studio filming employing distortive techniques such as filming action reflected in a Mylar sheet distortive mirror. The in-studio filming is less colorful than the reprocessed found footage—more just reddish-brown monotone—but more stark, patent, blatant, in imagery. But universally handsome and beautiful photographic works—just that you may not want to look too closely at the images. (Or you may, depending on your personal predilections, proclivities.) But pretty raw gay sex stuff.

Though neither do you get the sense that Brose is trying to shock anybody—wants to shock anybody—you don’t have to look—but just tell the truth as he knows it. What artists do. (I may be wrong about the not wanting to shock. That has to be part of the artistic strategy. I guess the point is ultimately just that this is complicated stuff, artistically and socio-politically. And Brose doesn’t flinch—from either angle, either perspective—from expounding it.)

The found footage works are from the first part of the film. The filmed in-studio works are from the central part. The imagery that represents—not literally but metaphorically—Wilde’s incarceration. Lots of chains. Bondage. And in general the world of furtive and illicit—as it was formerly—gay sexual encounter, endeavor, as hellish more than heavenly. A series within the filmed in-studio series shows an actor in a devil mask behind a row of flame lights of some sort. It looks like something out of Dante’s Inferno.

And now represents—by transference extension—but prophetically when the film was made, Brose says—his own virtual if not actual incarceration, and associated near-complete destruction of his good name and career and fortune, for basically the same offense as Wilde’s, homosexuality.

The filmed in-studio series is titled In Carcere et Vinculis (Latin for “in prison and chains”), which was the original title Wilde had given his letter from prison, that was later titled De Profundis (Latin for “from the depths”).

The title of the show is Indicted. All the print works were created during the artist’s recent residency at the Institute for Electronic Arts at Alfred University. The show continues through July 24. (Note: Open hours at BT&C Gallery are limited to Friday from noon to 5pm. Other viewing hours by appointment. Call 604-6183.)