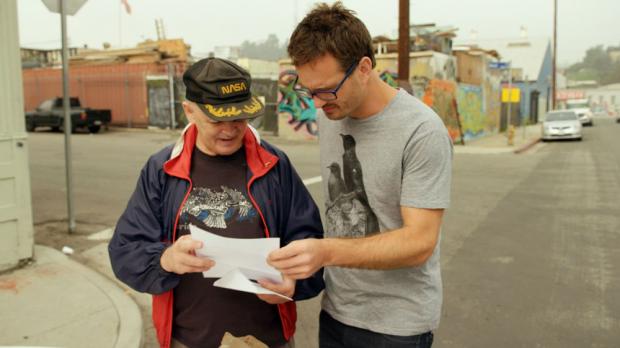 David Farrier is an entertainment reporter in New Zealand. Along with covering movies and doing celebrity interviews, he also does amusing filler pieces about the “weird and bizarre side of life.”

So of course he spends a fair amount of time searching the internet for possible stories. One afternoon he came across a site, Jane O’Brien Media, which sponsors what it calls “Competitive Endurance Tickling.” The site advertises for contestants, young athletic men who, if selected, will be flown to Los Angeles, housed in a luxury hotel and paid a generous stipend, to engage in CUT matches. These consist of being tickled for as long as you can take it. Nothing overtly sexual about it—the ticklers are other men, everyone keeps their clothes on, and the areas that are and are not to be touched are carefully spelled out. No naughty bits.

For someone on Farrier’s beat, that was a no-brainer. So he emailed the company to inquire about doing a story on CUT. Not only did Jane O’Brien turn him down, she did so rudely and at great length. She also made it clear that she had researched Farrier first, making references to his career and personal life.

So extreme and persistent were these denials that Farrier’s interest was piqued. A little internet research revealed that Jane O’Brien Media was registered in Germany to a company that owned hundreds of other tickling-themed websites. He posted what he learned as a blog that got so much attention that he decided to expand his investigation into a documentary film.

And that’s when it started to get weird.

Made in conjunction with filmmaker Dylan Reeve, Tickled starts out looking like a documentary about one of the endless pockets of sexual oddity that the internet has flushed into the light (also coming this year: Fursonas, about furries, people who—oh, go look it up). For contrast, Farrier and Reeve include a sidebar with another internet tickler who is happy to talk about his fetish and how he has made a good living from it. But it soon gets creepy as every bit of contact the two make with anyone who might know something about Jane O’Brien is met with disproportionate levels of threat and abuse. No one wants to talk, except to say, Back off for your own good.

If you were hooked on HBO’sThe Jinx, by all means put Tickled on your must-see list. (To explain the comparison would be to give away too much.) It’s shorter than that miniseries, at least in the viewing stage. But watching the movie is only the beginning: coming home to Google the dramatis personae and events that have taken place after the films release will keep you glued to your home screen for hours more.

The fanboys who have ben working themselves into a lather over the release this weekend of the Ghostbusters remake featuring a female cast are probably unlikely to divert their ticket dollars toward The Innocents, a different type of feminist film. It was inspired by the true story of Madeleine Pauliac, a young doctor who at the end of World War II was working for the French Red Cross. Stationed in Poland to help tend to French soldiers, she became aware of nuns who had been repeatedly raped by Russian soldiers, tacitly allowed by their commanders as a spoil of war. Pregnancies ensured, which added a whole other layer of difficulty to the lives of women who took their faith and their daily rituals very seriously.

As adapted by writer-director Anne Fontaine, whose films (at least the ones seen in America) have dwelt on lighter topics—Coco Before Chanel, Gemma Bovery—The Innocents depicts a painful subject with care. Her focus is not on the abuse but on the difficulties of these women who had chosen to remove themselves from the world for various reasons. That it also delves into the meaning of faith shouldn’t put off viewers who have no truck with religion, as faith comes in secular forms as well.