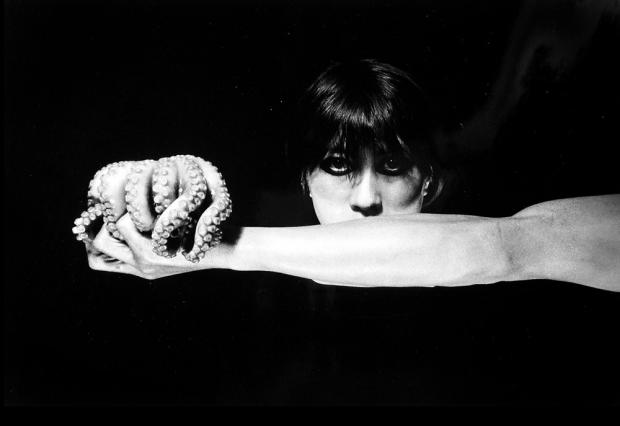 Three photographic series by Eikoh Hosoe, one of the eminent Japanese avant-garde artists of the post-World War II period, are currently on view in two CEPA galleries in the Market Arcade Building.

Culminating in the series and subsequent art book from the latter 1960s called Kamaitachi. A documentation project on his dance drama performance project in collaboration with dancer and actor Tatsumi Hijikata, involving a sequence of performance interventions in a rural village, based on a Japanese folklore trickster weasel figure that causes strange events and occurrences as it traverses the countryside.

Hijikata plays the weasel main character, and the villagers serve as audience cum inadvertent chorus to the impromptu dance dramas. The photos are of street scenes, domestic scenes, personal encounter scenes, including sexual encounter. And regularly enigmatic. In one shot we see Hijikata—presumably—in the mid-distance lying face down naked in what looks like a wet and cold plowed field. In another, we see him entertaining farm workers on a break from their labors with an apparently rollicking story or sketch. The best photo in the series is a street scene cluster of young children looking variously startled and entranced and mystified at the sight of a semi-naked dancer—white garments flying like angel wings above and behind him—in spectacular mid-leap in front of them.

Man and Woman no. 24 by Eikoh Hosoe

Myth narrative retold—reenacted—as a portrait of a people, a culture, a nation, in the dislocation decades after Hiroshima and Nagasaki. “I had decided I did not want to be a traditional documentary photographer, recording a place and its people directly,” Hosoe said. “I was a much greedier photographer: I wanted to capture my memory of the land…”

The subject of another series and subsequent book—from the early 1960s—is the famous Japanese writer and suicide Yukio Mishima. Wall copy relates how some years later Mishima and four associates attempted a coup d’etat, first barricading themselves on the second floor of the Japanese Parliament, then emerging onto a balcony, where Mishima read a manifesto to the onlookers and soldiers below, hoping to inspire a general uprising but inspiring only derision from the crowd. Whereupon he proceeded to commit seppuku—ritual disembowelment suicide—at the conclusion of which one of his associates was to behead him. But after several attempts, the associate failed to complete the task. Whereupon the associate himself committed suicide, and another associate had to take over the beheading work.

The Hosoe images are almost as bizarre as the man—the writer—himself. As further described in wall copy, when Hosoe first visited Mishima at his home, he was intrigued by a mosaic of zodiac figures in the garden. A number of the pictures are of Mishima naked except for a jock strap and wrapped in a garden hose—Mishima’s father had just been watering the garden, it is noted—against the mosaic and other garden features as background. Variations on the garden hose and zodiac mosaic theme include multiple-exposure overlays featuring European baroque architectural and decorative motifs. Garden hose bondage and Chippendale.

Man and Woman no. 32 by Eikoh Hosoe

The earliest series—no book this time—is from 1960. It is called Man and Woman, and like the Kamaitachi project was in collaboration with dancer Hijikata and members of his troupe. But abstract, non-narrative, in this instance. Or no apparent narrative. Partial images of one or two human figures and occasional props—a small octopus in one case—against densely black backgrounds and surrounds. Imagery briefly emerging from and then fading back into the inky darkness.

Hijikata was the founder of a dance genre called Butoh, meaning “dance of darkness.” A highly stylized form intended to emulate Japanese traditional as opposed to post-war contemporary forms, which Hijikata felt too much mimicked Western forms and traditions. Specifically, Hijikata thought Western tradition looked primarily toward gods of the sky, of the heavens, whereas, he considered, Japanese tradition looked toward gods of the earth, under the earth. A matter of Hades versus Zeus.