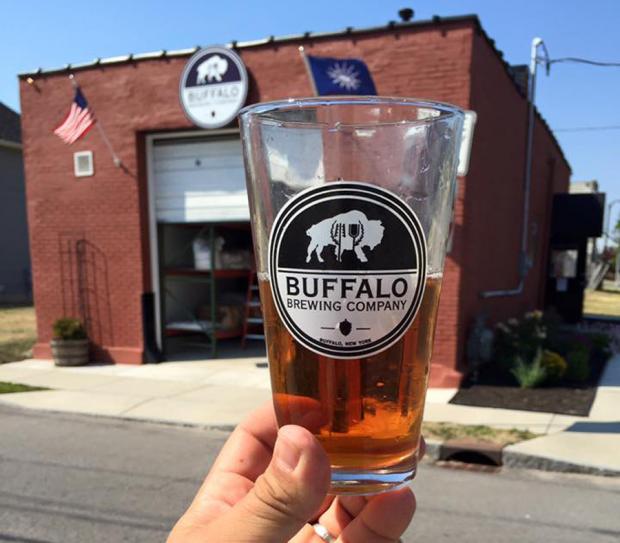 After two years of blood, sweat, and toil, John Domres and his family are set to begin serving their fantastic beers to the City of Good Neighbors. Having spent the last several weeks brewing up a veritable storm, Buffalo Brewing Company will open its doors to the public at the end of July.

Domres is proud to be serving several styles of beer at the Myrtle Avenue location. On tap, Buffalo Brewing will have 1804 American Pale Ale, 1813 Porter, 1825 IPA, 1842 Vienna Lager, and 2016 Celebration Ale.

“This journey has been nothing short of exhausting,” Domres says. “I can’t express how excited and grateful I am to be seeing my dream come true.”

Nestled peacefully in the historic Buffalo neighborhood, the city’s newest nanobrewery is a fully remodeled La Stella building, which is nearly a century old. The burgundy brick structure is adorned with strings of hop bines. Buffalo Brewing Company’s black and white logo hangs starkly above the loading door, beckoning all who would pass by.

Aside from a kickstarter campaign, Buffalo Brewing has been fully funded by Domres himself. In a brief conversation with The Public, he shared his approach. “They say entrepreneurship is living a few years of your life like most people won’t so you can spend the rest of your life like most people can’t. I can only hope that having worked as hard as I have to make this become a reality, that I will have the privilege of being able to do what I love more than anything for a living: brew great beer and interact with great people.”

Buffalo Brewing’s small tasting room offers a great view of the brewery, and is home to a small retail space which offers growlers and glasses that can be filled on premises, among other items.

Above all, though, Domres and Buffalo brewing have one singular focus. “I just can’t wait to become operational, and serve our good neighbors some great beer.”

For more information regarding hours of operation and beer available, visit buffalo-brewing-company.com.