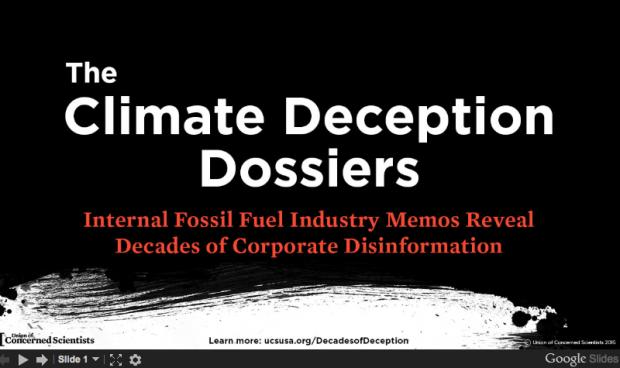 Of course we ae shocked, just shocked, by a new report released last week by the Union of Concerned Scientists reveals that for nearly three decades, many of the world’s largest fossil fuel companies have knowingly worked to deceive the public about the realities and risks of climate change. The report uses materials from leaked documents, documents obtained through lawsuits, and disclosures from Freedom of Information Act requests.

The Report- The Climate Deception Dossiers, released on July 9, uncovers a coordinated campaign of deception and misinformation underwritten by familiar companies including ExxonMobil, Chevron, ConocoPhillips, BP, Shell, Peabody Energy, and other members of the fossil fuel industry.

The report uncovers activities and  publishes documents related to industry hired public relations professionals engineering of opinions and public perceptions about the reality of climate change and actions that governments, including the US Congress have or could take.

Documents published in the study iinclude The American Petroleum Institutes 1998 “Roadmap” Memo which focuses on a “Global Science Communications Plan” and the intent to use paid scientists to act as industry spokespersons; the “Western States Petroleum Deception Campaign” which included the creation of industry sponsored “grassroots groups” to activate campaigns and opposition to climate change science; forged letters from the coal industry public relations engineers to Members of Congress -especially during the congressional debate in 2009 about the “American Clean Energy and Security Act of 2009”; the creation of the phony “Information Council on the Environment” which pretended to be an autonomous science based group but in fact was wholly funded by the coal industry and included a $500,000 advertising campaign; and deceptions initiated and carried out by the American Legislative Exchange Council (ALEC) which continues a disinformation campaign in local, regional, and federal legislatures and agencies.

These many messages have probably entered into your brain through the brilliantly mesmerized and non critical media outlets that help to characterize our knowledge and opinions.  these media outlets include most that are located in Buffalo.  The messages are designed to create doubt about the realities of climate change and the impact of the fossil fuel industry.  The Public may be the only place that you will find this particular bit of news

In another bit of astounding Monday morning news comes a report from the DeSmog Blog that Shell Oil may remove the word “oil” from its name as it moves to drill in the arctic and the Gulf of Mexico. Shell Oil probably will become something like “GreenShell Environment and Ecology Explorations.” If you have any good ideas about what Shell’s new name could be, please use our comments sections below to post your considerations.

“As early as 1977, representatives from major fossil fuel companies attended dozens of congressional hearings in which the contribution of carbon emissions to the greenhouse effect was discussed. By 1981 at least one company (Exxon) was already considering the climate implications of a large fossil fuel extraction project.

In 1988, the issue moved beyond the scientific community and onto the national stage. James Hansen, a leading NASA climate scientist, testified before Congress that scientific data had confirmed that industrial activities were causing climate change. It was also in 1988 that the United Nations formed the Intergovernmental Panel on Climate Change and the U.S. Congress introduced the National Energy Policy Act in an effort to reduce emissions of heat-trapping gases.

It is difficult to imagine that executives, lobbyists, and scientists at major fossil companies were by this time unaware of the robust scientific evidence of the risks associated with the continued burning of their products.

-More than half of all industrial carbon emissions have been released since 1988—after major fossil fuel companies knew about the harm their products were causing.

-Indeed, one of the key documents highlighted in the deception dossiers is a 1995 internal memo written by a team headed by a Mobil Corporation scientist and distributed to many major fossil fuel companies. The internal report warned unequivocally that burning the companies’ products was causing climate change and that the relevant science “is well established and cannot be denied.”

-How did fossil fuel companies respond? They embarked on a series of campaigns to deliberately deceive the public about the reality of climate change and block any actions that might curb carbon emissions.

-The result? More than half of all industrial carbon emissions have been released since 1988 and there is still no comprehensive U.S. federal policy to address the problem.”

The UCS report concludes that in order to hold the fossil fuel industry accountable for the damages that they have knowingly done including the overall cost to humanity of the economic, environmental, and social costs -we should as a civil society, demand that they:

Jay Burney is the environment and ecology editor for The Public and a founder of GreenWatch.