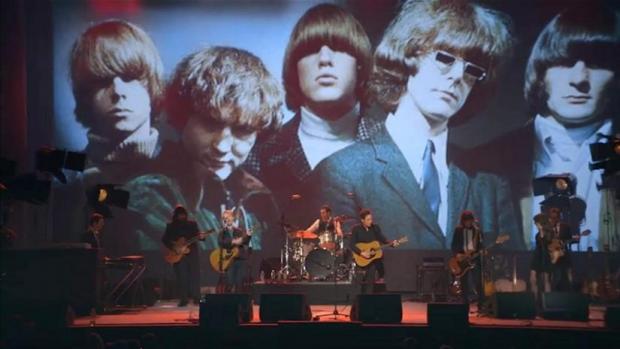 Think of popular music of the late 1960s and you’re likely to think of the Beatles and the whole “British invasion” that crossed the Atlantic with them. But American music more than held up its own end, as demonstrated by this vaguely conceived but entertaining documentary.

The conceit of this debut film by Andrew Slater, formerly the CEO of Capitol Records, centers on Laurel Canyon, the idyllic neighborhood of Los Angeles that attracted musicians and other bohemian sorts who had to live in LA but wanted to feel like they weren’t. (A map that shows up at one point locates the houses of many of them, along with that of one-time Canyon resident Boris Karloff.)

But don’t be expecting a lurid expose of the legendary party scene that was supposed have existed here in that era. The location only serves to tie together  (loosely) compile interviews Slater and musician Jakob Dylan shot with various musicians about the California scene. The focus is on The Beach Boys, The Byrds, The Mamas and the Papas and Buffalo Springfield. (As for The Association and The Turtles, who are given equal billing in the opening credits, there is only a cover song from the former and nothing at all from the latter, more’s the pity.)

Dylan chats with what survivors of the era they were able to coax in front of their camera, including Roger McGuinn, David Crosby. Michelle Philips, Brian Wilson, and Steven Stills. Eric Clapton, Ringo Starr and Graham Nash discuss the trans-Atlantic pollination of music, and everyone is happy to say how much they liked everyone else’s records.

As infectiously fun as it is to watch musicians talking about music they love by other bands, you can’t help but wish that they would explore that love in a little more depth. It’s one thing to say, as John Sebastian does, that even Brian Wilson’s early songs show the influence of Bach. On the other hand, Slater is happy to show Tom Petty demonstrating the simplicity of the ringing guitar riff on the Byrds’ “I’ll Feel a Whole Lot Better.” (Let’s hope that some musicologist is working on the equivalent for Wilson of Scott Freiman four “Deconstructing the Beatles” films.)

Still, the music is all glorious, whether in the original recordings or at the tribute concert staged for the project featuring Dylan, Fiona Apple, Beck, Regina Spektor, Norah Jones, Cat Power and others. And there are great anecdotes along the way. In my favorite, Crosby faces the camera and reveals the real reason why he was kicked out of the Byrds in 1967: “Because I was an asshole.”