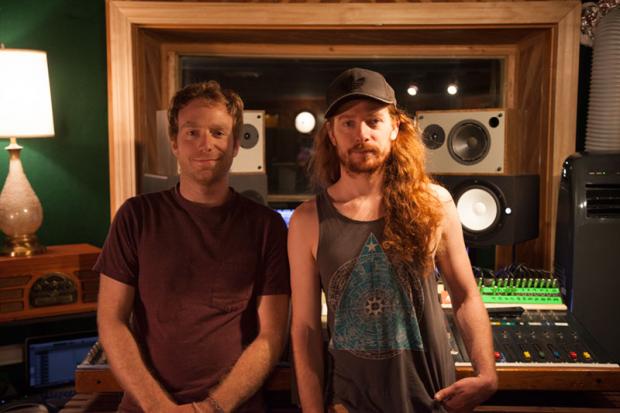 There’s a building on Main Street in Buffalo that many musicians here would recognize. The three story building located at 1689 Main Street is a meeting place for local musicians, full of band practice spaces—drive by at any time of day and you might see some musicians smoking cigarettes on the roof, looking north down main street toward Record Theatre, maybe hoping to find their music in a store like that one day. On the third floor of the building, which was once a pie factory, there’s a recording studio known as Mammoth Recording Studio. The studio has been there for years but only recently has it been taken over by a couple of new owners. Those new owners are Mike Santillo and Justin John Smith, members of local indie rock bands The Tins and Aircraft, respectively. As new owners, they’ve revamped the studio, attracting bands and musicians of all kinds to record at the familiar yet updated studio.

Before Santillo and Smith took over, the owner of the studio was Joe Orlando, who opened the studio in 2012 after renting a practice space in the building for years with his band Mother Red. The studio, which was built in the 1980s, was formerly known as Echo Base and was run by John Angelo of the band Kid Gorgeous, but it had been vacant for a few years before Orlando took over.

A couple of years ago, Orlando opened a restaurant, Organic 3 Cafe in Snyder, and soon realized it would be difficult to split his time between the restaurant and the studio. That’s when Smith and Santillo stepped in. During that time Orlando got to know Smith while recording his band, Aircraft.

“Justin and I hit it off pretty well,” says Orlando.

For a year, Orlando and Smith split the rent for the studio but eventually Orlando turned the keys over entirely.

“[Orlando] stopped doing sessions maybe a year and a half ago. That’s when I decided it would be a good idea to come in here and see what would happen. Mike was on board,” says Smith.

“It couldn’t have worked out any better,” says Orlando. “I put a lot of work into establishing that name, it was a labor of love, so I was just happy to know that the name of the business was going to stay alive and that it was under good hands.”

Word of mouth has been one of the main sources of new clients for the new owners, but Mammoth is a pretty well established brand, and that’s part of the reason they chose to keep the name.

The studio is decorated with funky tapestries and a psychedelic 1960s style rug. “The rug really ties the room together,” Santillo says, grinning proudly at his Big Lebowski reference. They stole the rug from Justin’s living room, he says. In the corner, a reel to reel tape machine sits, staring out at the room like a miniature robot ready to be activated. The reel to reel robot watches over as we chat in the comfy control room of the two room studio.

“We had to do an official transfer of business. Go to the bank, sign some stuff in front of a notary. Then it was ours,” says Smith, explaining the process of taking over the business. The next step was investing in all of the gear.

“For me, that’s one of the really fun parts. Collecting, building your own spaceship room to make crazy sounds in,” says Smith.

The way that Smith and Santillo explain it, the heart and the organs of the studio had to be replaced. They bought new microphones, stands, preamps, and the interfaces.

“The mixer, I’d say it’s the soul of the studio,” says Smith. The Midas mixer model, which is straight out of the 1970s, Santillo tells me was designed for Cat Stevens to tour with. It’s meant to be a live console, which means it has really great preamps, which warms everything up, Santillo says.

“Investing in those pieces of gear was so important. Balancing budget with the highest quality stuff we can get is important. We want to make sure every purchase is a good purchase for the studio, not a wasteful purchase,” says Smith.

The building manager, Doug Jones, got the mixer at an auction for a theater that was going out of business. The weather on the day of the auction happened to be blizzard-like, so needless to say, there were not a whole bunch of bidders present, or so the story goes. Jones has had a big part in helping the studio run, they tell me. He originally built the recording studio rooms years ago.

“Doug has said he wants to this place punk rock. That’s his vision of this whole thing, and I like that about it,” says Smith about the band practice spaces.

The studio room itself is far more put together than most of the band practice rooms.

“People come in here and they feel comfortable, they bring their friends in, they hang out, they record. I’ve heard from most people that come in here that it’s a very comfortable place for them to be creative without a lot of pressure,” says Smith.

One of the first things the guys did after officially taking over was to design a new website.

On the website, there are a bunch of samples of songs they’ve recorded so far, including one by the band The Observers. The Observers, a six piece Americana bluegrass band came in and recorded a whole bunch of songs, 13 to be exact. They were able to track much of the music in an eight or nine hour session, in part because they decided to record live.

Josh Gage, guitarist, vocalist, and ukulele player of The Observers, talks about the band’s experience working with Santillo and Smith.

“They’re both awesome. Justin was the lead on the project but Mike was there pretty much the whole time and actually did some backing vocals on it for us. It was great, Justin, coming from kind of a different experience in the electric music world, he provided a lot of opportunity to tweak our sound,” says Gage.

The guys spend much of their time recording for clients, but one huge perk in owning the studio is that they can record their own bands whenever they’d like.

The Tins have been the more active band since Santillo and Smith took over the studio, they tell me. After our interview, the Tins came into the studio to record a Beatles cover for a cover EP the band plans to release this summer.

“We just decided to do it this week and booked the session,” says Santillo. There’s not so much planning. It gives us a lot of creative freedom to keep making music and recording songs.”

Though Smith hasn’t recorded his band very extensively since taking over the studio, he’s obviously looking forward to it. For now he’s focused on being the best sound engineer and producer he can be.

“Engineering a session is really cool. Each band has their own chemistry, which creates this unique personality. “

The two business partners met at Caffee Aroma in the Elmwood Village, where they both worked. Their bands also played gigs together regularly.

“We immediately hit it off,” says Santillo.

Smith has a degree in sound engineering, so opening this studio has been a dream of his. But it’s also been a learning experience in many ways. “There’s different aspects of learning. There’s learning how to communicate with the band in order to help facility the desired result of the sound. A lot of it is abstract; what a band wants to sound like. There are communication subtlties that are a huge part of engineering a session. I’ve also learned a ton about the technical aspects of recording audio.”

Santillo has been a musician on the local scene for many years and has recorded demos for his own band many times. He knows the basics of recording, he tells me, but he’s learning more every day. He also handles much of the studio management—getting in touch with clients and booking sessions, and assisting Smith with the recordings.

“The goal is to offer a really high quality recording, and to work with them to get what they want out of a recording session,” he says.

“We’re not just an engineer for hire who is just pressing record,” Santillo adds. “We’re completely involved in every project. I think because of that, we’re putting into these songs, we’re working on these songs with other artists in the way we would our own music. “