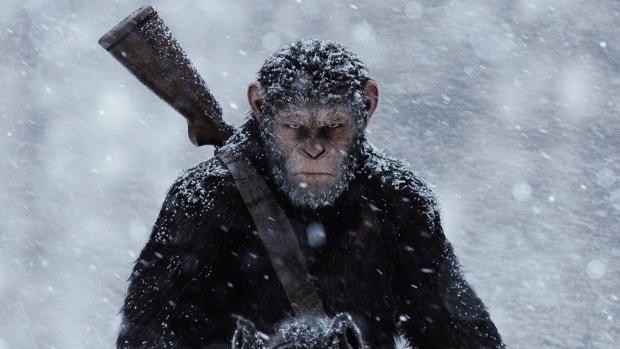 War for the Planet of the Apes is the third film in 20th Century Fox’s reboot of its popular five-film series—the Star Wars of its day—based on Pierre Boulle’s satirical science fiction novel Monkey Planet. It’s being marketed as the concluding chapter of a trilogy depicting the rise of the chimpanzee messiah Caesar (played in the original series by Roddy McDowell and in the current films by Andy Serkis), but don’t expect this thrilling, emotionally satisfying, and meticulously crafted installment to be the end of this new saga. Action-fantasy films this good can fuel a decade’s worth of spinoffs.

The chief appeal of the original series, which ran from 1968 through 1973, was the Oscar-winning makeup that enabled actors to play talking apes endowed with human characteristics, and the films succeeded because the apes mirrored ourselves, as zombies do today. They also offered a pessimistic, and frequently nihilistic, view of mankind and his warlike ways.

Following the dismal reception to Tim Burton’s murky 2001 remake, fans were pleasantly surprised by 2011’s Rise of the POTA, the first entry in the new series, and enthralled by its 2014 sequel, Dawn of the POTA. The films successfully re-envisioned the fourth and fifth entries in the original series, substituting genetic engineering for convoluted time travel baggage as the reason for Caesar’s human intelligence, motion capture for traditional makeup, and a manmade virus for nuclear destruction. These films operate as prequels to the original classic, eschewing the mythology of its sequels while respecting them.

The new film opens fifteen years after the “simian virus” wiped out most of mankind and increased the intelligence of apes, and two years after the surviving American military pledged to eradicate those apes. Caesar, his family and tribe now live in a secret enclave outside San Francisco while human soldiers hunt them. The apes—most of whom communicate using sign language—wage guerrilla warfare against forces lead by Woody Harrelson as a Colonel Kurtz-like commander who sees himself as mankind’s savior. The references to Apocalypse Now, Bridge Over the River Kwai (also based on a Boulle novel) and The Ten Commandments are as plentiful as the nods to the original films. This movie has a lot on its mind, and director Matt Reeves (soon to direct Ben Affleck as The Batman) weaves all of the subtext into a world that alternates between epic and intimate.

The apes we’ve come to know as Rocket the chimp, Maurice the orangutan, Lucca the gorilla, and Blue Eyes (Caesar’s heir) are back, and it’s a testament to the actors and expressive technology that the audience will fondly embrace them as old friends. These fully realized characters join Caesar on a quest for revenge straight out of Clint Eastwood’s The Outlaw Josey Wales. Along the way they pick up Bad Ape (voiced by Steve Zahn), who provides the grim scenario with comic relief that is never cloying, and a human moppet (Amiah Miller), who’s lost the ability to speak. The apes-as-slaves motif of Conquest of the POTA is revisited, and Harrelson’s futile goal of “building a wall” to hold back his enemies is handled deftly and without too much winking at the audience. Who needs an Alpha Omega bomb to blow up the world when we have Donald Trump’s tribalism?

It’s hard to believe special effects can still dazzle an audience spoiled by technology that makes anything possible, but War succeeds admirably, delivering powerhouse entertainment with rare emotional resonance. Whether depicting 100 apes cavorting in the jungle or four of them on horseback chasing an enemy, Reeves and his team pull out all the stops. There was talk of Serkis receiving an Oscar nomination for his first outing as Caesar, and he surely deserves one this time around. His chimp ruler is constantly at odds with himself, weighing the responsibility of leadership and the survival of one species at the cost of another. Parents unfamiliar with the dark nature of this series are advised that the film is probably too violent (and too dramatic) for young kids and sensitive adolescents, but sci-fi fans can rejoice at the picture’s many achievements.