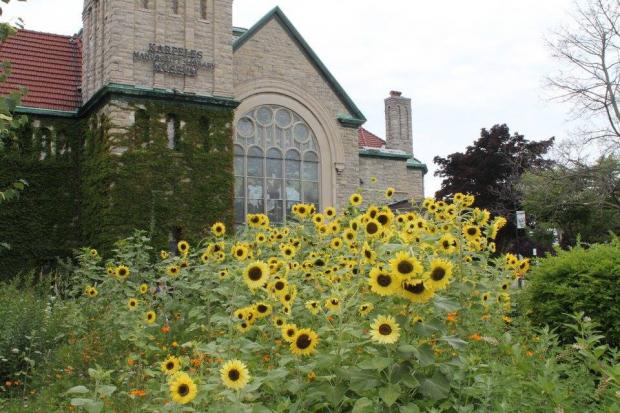 The Shakespeare Garden in front of the Karpeles Manuscript Museum at Porter and Jersey
by
Jack Foran
/ Jul. 12, 2017 10am EST

At Porter and Jersey, a garden that honors William Shakespeare

Last year, the William Shakespeare anniversary year, retired English teachers Dave Sarata and Catherine Prion-Sarata and a few hundred raw novice to master gardener volunteers planted a Shakespeare Garden. Already this year, the four small apple trees more or less in the center of the triangular plot at the corner of Porter Avenue and Jersey Street, adjacent to the Karpeles Manuscript Museum, have their first apples.

Other features of the garden include: a little gothic tower-form willows arbor; a sapling poles and sticks bower amid dense meadow greenery sprinkled with buttercups and violets, against a backdrop of varieties of climbing ivy; an herb garden; a vegetable garden; a cottage garden entirely of flowers in jumble profusion array; and a perimeter hedge of white roses for the House of York, and red roses for the House of Lancaster, the opposition parties in the War of the Roses serial subject matter of Shakespeare’s history plays.

And unobtrusively posted here and there around the garden, quotations from the plays referencing nearby plants and flowers, and exemplifying some dramatic uses Shakespeare made of these botanicals.

Such as for mischievous plot advancement, in Oberon’s manipulation of lovers’ affections by application of an unguent derived somehow from wild pansy flowers (including second-stage manipulations to correct the mayhem after the unguent is initially applied to the wrong lover):

Flower of this purple dye,

Sink in apple of his eye.

When his love he doth espy…

Or express the exuberant joy of romantic love. With an amalgam of music and flowers, in Duke Orsino’s outburst opening:

If music be the food of love, play on!

Give me excess of it…

That strain again! It had a dying fall.

O, it came o’er my ear like the sweet sound

That breathes upon a bank of violets…

Sleep thou, and I will wind thee in my arms…

So doth the woodbine the sweet honeysuckle

Gently entwist; the female ivy so

Enrings the barky fingers of the elm…

Or for ironic moral instruction in Sir John Falstaff’s comparison/contrast of the situation with youth and that with the camomile plant, when he warns Prince Hal: “…for though the more [the camomile] is trodden on, the faster it grows, yet youth, the more it is wasted, the sooner it wears…” (Henry IV, Part 1, Act II, Scene 4).

A posted short disquisition in the vicinity of the cottage garden explains that “there are no ‘betwixts and betweens’ in a cottage garden. Nothing between the acknowledged sovereigns of the plant world and its humbler members.” Roses and lilies—sovereigns, apparently—cheek by jowl with sweet williams, pinks, and wallflowers. A veritable “sea of flowers…inviting you in,” but offering no clear navigational pathway through the garden.

The day I visited the project, Sarata was digging a vegetable plot and planting such traditional English garden crops as cabbages, peas, rhubarb, onions, and garlic, along with some possible newcomers—from the New World—to the English Renaissance garden: maize corn, squash, and potatoes. While in other plots, two volunteers, master gardener and artist and entrepreneur Sean McElroy and University of Buffalo political science grad student Colin Tucker, were planting herbs and flowers. Dill, thyme, rosemary, sea holly. Daisies and violets.

More volunteers are welcome and invited. To get involved, go to the volunteerwny@galaxydigital.com website. But volunteer or not, go see and enjoy.