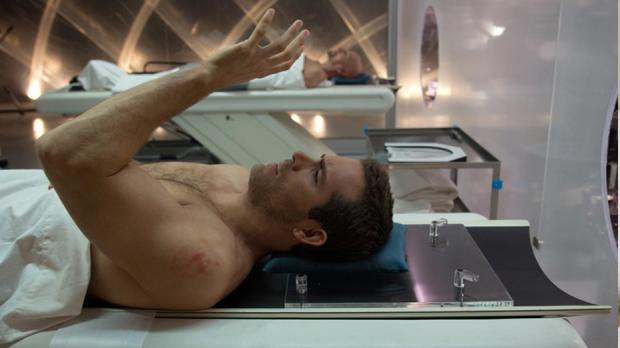 The good news is that despite what sounds like a similar plot—a man gets a second chance at life in a new body—this is not a remake of the 1966 classic Seconds, in which a business exeutive gets to start a new life as Rock  Hudson. That’s good news only for fans of the John Frankenheimer film, who don’t have to suffer through what would inevitably be a poor imitation.

The bad news is that Self/Less isn’t much of anything else, a B movie script with a B+ production that looks even worse than it had to up against Hollywood’s annual onslaught of summer blockbusters.

Ben Kingsley opens the movie as Damian, a megarich New York industrialist. We don’t know how he made his money, but we know he has lots of it from his penthouse, which overlooks Central Park and seems to be made entirely of gold and marble. We know he’s a native from an accent that Kingsley seems to have borrowed from Al Pacino on an off day.

Dying of cancer, Damian agrees to a hush-hush procedure that will put his consciousness into a new body that greatly resembles Ryan Reynolds. (Fortunately the producers were able to get Ryan Reynolds to play the part.) His death is faked, the procedure is a success, and new young Damian is sent to New Orleans to recuperate and, ahem, test the new equipment.

Despite all the talk of this being a procedure to save the “great minds” of our time from unnecessary mortality, we have no idea what new contribution Damian plans to make to the world. Instead he finds that the procedure is not quite what was described to him. As someone in the know admits to him, “You thought you were driving a new car, and it turns out it has a few miles on it.”

And that is where ethics demand that I stop describing the plot, though even if you can’t see where it’s going you’ll be disappointed to discover it. Self/less is the most banal kind of science fiction, with none of its rehashed ideas developed in any but the most cursory way. Not does it have any kind of visual flash: special effects are limited to some hackneyed vehicular mayhem. It’s all the more disappointing given that the director is Tarsem Singh, who moved from music videos (REM’s “Losing my Religion”) into films with two strong features, The Cell (2000) and the little-seen but excellent The Fall (2006). You’d never know he was capable of good work from this listless time waster.