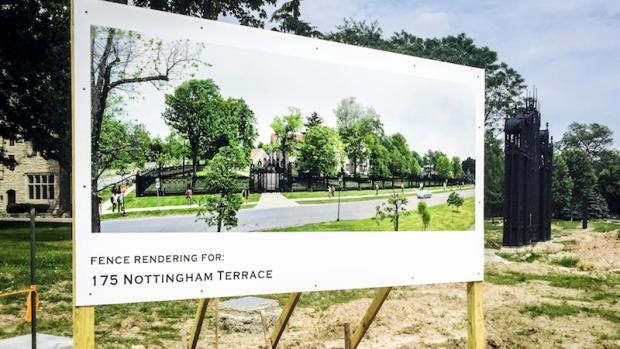 The ugliest fence abutting the perimeters of Delaware Park—at  175 Nottingham Terrace, the corner of Lincoln Parkway—has recently entered a new phase. It has now shifted from ugly to ugly plus PR.

Its two free-standing gates, as we reported here some time back (“Buffalo Ugly,” May 11), are twice as high as their City of Buffalo variance allowed. Then it turned out that the fence ran for twice the distance originally proposed, and was many times as ugly as anyone who knew it was coming might have imagined. That’s because the city variance hearing on Ugly Fence occurred a month before the publicly announced date of the hearing, so none of the neighbors who would have to live with this $800,000 monstrosity constructed by an absentee landlord even got to comment on how ugly it was and how much it violated the requested variance.

Most of the people who own property surrounding Delaware Park have managed their property in a way that is harmonious with the Park. They’ve respected and honored Frederick Law Olmsted’s notion that a park in the heart of a city (when he designed Delaware Park it was at the city’s edge, but he knew where the city would grow) should be part of everything around it. He included in his sightlines Forest Lawn, which was already there, and the Richardson Insane Asylum, for which he would design the grounds and make them contiguous with Delaware Park and Forest Lawn, creating a green space every bit as large and far more complex than Central Park in Manhattan. If you drive around the park you go through a variety of neighborhoods. They all, as the late Robert Creeley put it in a poem about something else, fit.

For the most part, there has been a wonderful collaboration between Olmsted and the people in Buffalo privileged to have been part of his vision. Buffalo’s civic planners ruptured his park design with the deadly expressway, route 198, and destroyed his most  magnificent urban parkway to create the Kensington Expressway.

All that is old history; bad history; things we all know. But people these days are trying to resurrect some of Olmsted’s great vision for Buffalo, his greatest complex project.

Which is why, just about everyone owning a house or building surroundings the park has tried to keep their property harmonious with it: The owners of those houses look at Olmsted’s great work, and anyone in Buffalo who goes there takes pleasure in it, and we (we own one of those adjacent houses) try to keep Olmsted’s vision alive. Not for historical sentimentality but because it works. It’s one of the things that makes Buffalo a good place to be.

The single exception is this one monstrosity at 175 Nottingham Terrace, at the intersection of  Lincoln Parkway. For months, what was there was a huge ditch around the property with scores of small concrete pillars, and two huge ugly wrought iron gates.

The ditches were dug, the concrete pillars were set, the two fences went up, and then it stopped dead. I don’t know if people filed lawsuits, if the owners feared lawsuits, or if they just realized they were doing something really ugly. For whatever reason, no construction people have been on the site for months, the ditches have gotten uglier and uglier, and the two oversize fences have grown evermore absurd, and the mud ditches remain a neighborhood eyesore.

Scale, as Gulliver discovered while exploring the nipples of the Brobdingnagians, matters. Even something lovely, if it is blown out of all proportion to the world it inhabits, becomes freakish. Which is the case with this overbuilt $800,000 fence.

Right now, it is just those two huge gates that went up early (and violated the variance), and a lot of turned-up dirt and mud. It is the biggest eyesore around Delaware Park (save the 198, which is another story).

But there has been one development in this muddy saga that has been on hold for three months: The absentee landlords have now started PR. They’ve bought and mounted a big sign meant to tell us this eyesore is really okay.

A week or two ago, there appeared at the corner of the property a huge artist’s conception sign showing the complete fence, with happy young people strolling past it, and with the angle of vision slightly high, so you see the happy young people, the beautiful house, the manicured lawn.

It is still an ugly, clotted fence. And the vision you get in that poster of an artist’s drawing is one you will never see unless you go by the property on very tall stilts. From ground level, it is every bit and ugly and inappropriate as those two massive, illegal, and oversize gates.

The whole fence and this artful but finally silly poster say, “We own this place; keep your  distance. We bought this big fat house. We don’t even live in it. We spent eight hundred grand keeping you at bay.” That is not what Frederick Law Olmsted’s gift to Buffalo was about. Who needs neighbors who think that to live in Buffalo they must first build themselves a prison?