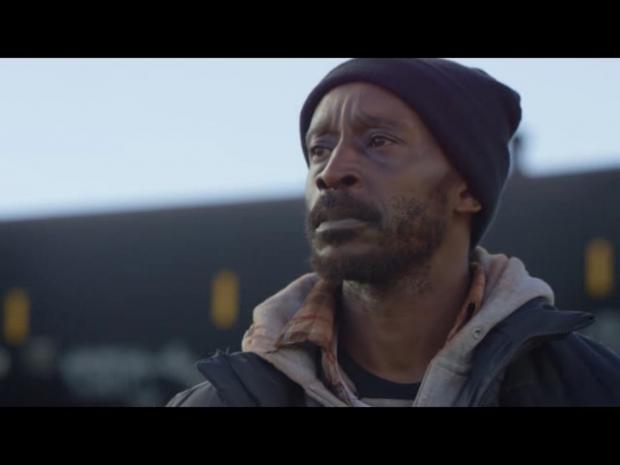 A moving performance from Rob Morgan is the best reason to watch this inspirational drama that otherwise fails to deliver the punch it spends nearly two hours winding up for.

Morgan (Mudbound, “Stranger Things”) stars as Brian Coleman, a Jersey City lawyer whose seemingly perfect life falls apart after he is shot in a random robbery. Homeless, alcoholic and abandoned by his family, he is given a second chance at life after 14 years on the streets. But his ability to remain on an upward path is tested when he finds himself a caretaker for Taj (Walter Fauntleroy). the thug who shot him and ruined his life, now confined to a wheelchair as a result of the same violence he once directed against Brian.

Morgan’s often aching portrayal of a man who has lost all hope combines with co-directors/cinematographers Rock Davis and Jay Rodriguez’s use of Jersey City streets to give Steps plenty of gritty atmosphere. The film also benefits from committed performances by the rest of the cast, particularly Fauntleroy and Robert McKay as the minister who gives Brian a hand up.

The drawback is a script that is strong on characterizations but weak on plot: the story resolves itself (in a way that will surprise few viewers) less because the characters have worked their way there as simply because that’s what the genre requires. To its credit, Steps is blessedly free of the religious proselytizing that mars many movies of this kind. It’s a heartfelt movie that you wish was a little better than it is because you feel the people in it deserve a little better, and that’s no mean feat.