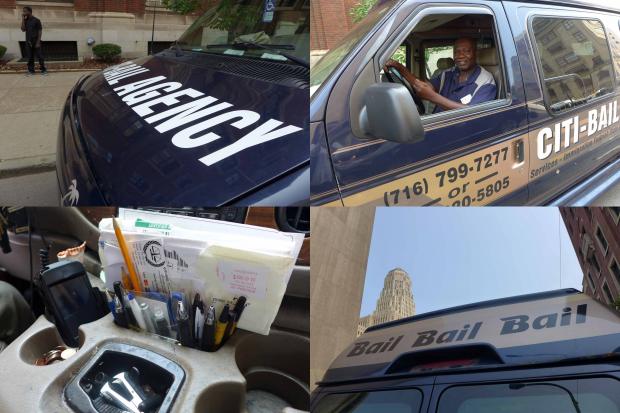 Working in the shadow of downtown Buffalo’s brutalist concrete city court building, in a rusty and DIY-repaired Ford van, is bail bondsman George Osei Gyamfi. George works seven days a week and is strategically positioned before the main entrance of city court in the center of the block.

The Public sat with Gyamfi in the van, listening to mellow pop tunes on 96.1 for an hour, learning the ropes of what it takes to be one of a handful of bond brokers working on the street.

He knows the regulars: the cops (both uniformed and plainclothes), the other bondsmen, some of the day’s defendants, and other familiar faces. While profiling the passersby, a woman heading into court consulted him about which courtroom a certain judge would be presiding. Gyamfi advised her to check for the room and part on the directory inside the building.

Gyamfi, originally from Ghana, West Africa, has been in bonds for about three years. Before this business, which he says he learned from his brother, working out of the van just behind his, he co-owned Ashanti Steakhouse on the city’s East Side with his wife. “A poor foundation meant that they had to take the building down,” he says. And is he sad to no longer be running the steakhouse on Fillmore Avenue? His answer is a resounding, hearty “No!”

Sounding like the archetypal advertising of DWI attorneys, Gyamfi says, “Don’t get arrested.” But if you do, and find yourself in the Erie County Holding Center, you might want to give him a visit, or call. His vehicle and business cards give his home address as well as two local phone numbers and a fax line. The Ford is tricked out with an HP printer in the back among the day’s paper, and office supplies. He takes all major credit cards, and, on rare occasions, personal checks. “If I’m looking at the person and it strikes me that they are honest, I will take a chance.”

He shows a chart created by the state outlining what a citizen must pay him to write the bail check: on a $5,000 bail Gyamfi will take $460 to spring the defendant after their arraignment. He explains that once that person has paid the fee they are the indemnitor. He outlines the paperwork and process that he must follow, approximately thirty minutes per case.

And what about a person who skips their bail? “There are five skips per one hundred bails. Most people don’t want to go to court,” Gyamfi says. “I take their picture here and print it out and keep it on file. If they skip, I work with my guy to go get him.” And who is that guy? “You just met him,” he explains, “the guy who was just here with the food in his hands.” “Mike? The guy who works at LA Fitness?” “Yes, he’s my guy.” Mike, who just defended his lunch choice of burger, soda, and chips because he had just worked out for about two hours, will not wrestle a skipper to the ground but locate the person and call the BPD.

When is George Gyamfi busiest? “The holiday season, when people get to drinking. And I’m busier in the summertime, when people are out, drinking and fighting.”

“You hear everything every day, it’s part of the ritual,” he says, of people who feel compelled to explain the narrative of their defendant’s arrest, and their own hardships. “I listen, I don’t want them to feel judged.”