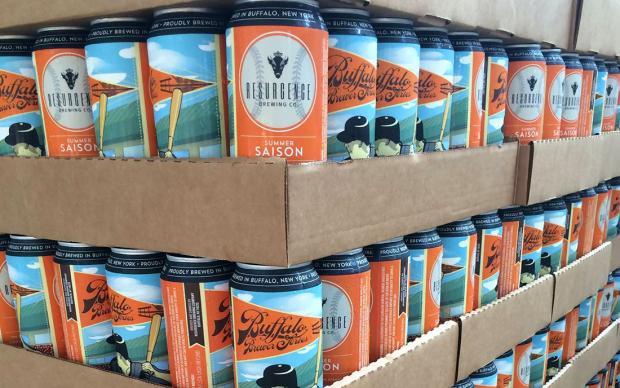 Buffalo is a sports town with a drinking problem. Or is it a drinking town with a sports problem? Either way, the two traditions—drinking and sporting—run pretty deep around here. And, fortunately for us, we appear to be entering a golden age for both.

With our sports teams, we have similar reason for optimism. The Bills are fielding their most deeply talented roster since their last Super Bowl appearance. The Sabres, meanwhile, have come out of a long rebuilding period absolutely stocked with young talent, having made the most important draft selection in the team’s history just last week.

In Buffalo, our beer and our sports appear on parallel tracks.

The “Ballpark Series No. 1” collectible limited-edition three-pack features a 16-ounce, specially designed commemorative can from each of the three Buffalo breweries.

The lineup is delicious:

An IPA, Community Beer Works (6.2%)—Brewed in collaboration with Big Ditch.  Aptly called “a hop lover’s dream” by the description on the can. A near-perfect IPA. What we’ve all come to expect from these guys.

The 16-ounce cans are gorgeous.  The design includes a detailed description of each beer opposite a stylized image of a Buffalo baseball player.

Ballpark Brewers Series No. 1 three packs are available for a limited time at all Consumers Beverages and at the home of the Buffalo Bisons, Coca-Cola Field, for $8.99 apiece—limit three per customer.

However you enjoy these cans of beer—at the beach, by the grill, or (like I did) spending time with loved ones—be grateful for these times in which we live. Downtown Buffalo is reawakening with renewed purpose and vigor. The Bills and Sabres haven’t generated this kind of optimism since the 1990s.  And Buffalo’s beer scene is once again bursting with life.

These are historic times. These cans could become quite the collectible someday.