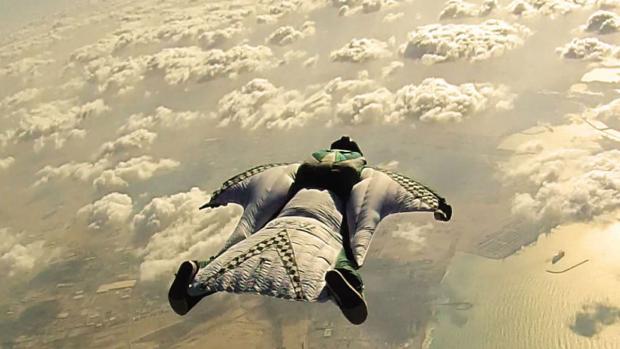 Matt Higgins didn’t set out to write about BASE jumpers, skydivers, and wing suit pilots, but after getting an assignment to cover a BASE jumping accident for the New York Times, that’s where he ended up. The Buffalo native became fascinated with the athletes and their quests to push their respective sports further and further with higher jumps and more difficult situations. What started as a few articles grew into a globe-trotting adventure as Higgins followed people at the top of the sports as they tried to do what no one else had accomplished. The result was his book Bird Dream: Adventures at the Extremes of Human Flight.

The book, published in hardcover last July, is out this week in paperback. The Public talked to Higgins about his time following the athletes around the world and the some of the misconceptions about the small group of men and women who participate in the dangerous sports.

You post links to news about BASE jumpers and wing suit pilots on your social media pretty regularly. Do you still follow the sport closely? Have you been on any expeditions lately?
I’m still in touch with these guys, but I haven’t had any link to their BASE jumping expeditions. I’ve been doing it remotely.

You have covered mainstream sports as well as action sports like skateboarding. What drew you to writing about action sports?
I had grown up skateboarding, skiing, and snowboarding. When these sports got really popular through the X Games, there was a need for people to write about them. I was getting my footing as a sportswriter and it kind of fell to me because few other people I was working with knew anything about these sports. They didn’t really understand the culture.

What made you specifically want to write about such a unique and obscure set of sports within that action sport category?
I was contributing to the New York Times in a lot of these types of stories and there was a BASE jumping death off of a bridge in West Virginia and an editor asked me to look into it. I knew what BASE jumping was, but I hadn’t paid any particular attention to it. I started looking into it and I just found these fascinating characters.

How did you go from writing one article about a BASE jumping accident to pitching an entire book to a publisher?
I was just captivated with this sort of extreme level sport that nobody had written very much about. It was changing so rapidly. It was evolving so rapidly when I started to get into it that I just kind of followed my curiosity.

Most people would consider anyone willing to participate in these sports to be insane. Is that how you perceive them or is there something more to their desire to take such risks?
It’s hard to do what they do. It’s hard to make a wing suit BASE jump. It’s dangerous and difficult. But to really push the envelope and do things that have never been done before, I think that’s what’s interesting to people, the exploration of human limitations. People are captivated on one hand, but maybe these guys are misunderstood. They’re not crazy. They do this because they have to, because they just have a feeling that they can’t get any other way.