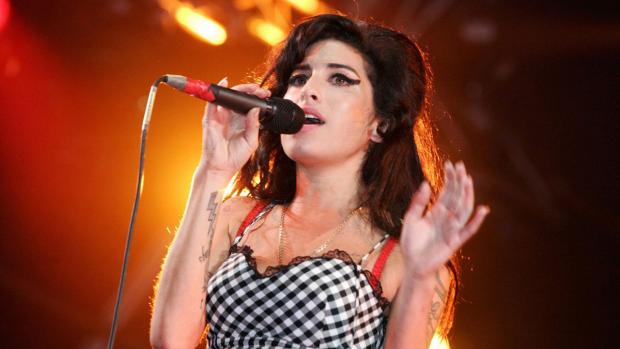 It’s a story we’ve seen replayed so many times that it would be banal if it weren’t so tragic: A young person bursting with talent finds enormous success, only to fall victim to the excesses of celebrity. When singer Amy Winehouse died of alcohol poisoning in 2011, at the age of 27, few were surprised. Her best-known song, “Rehab,” seemed to point to it, even taunt it: “They tried to make me go to rehab/I said, ‘No, no, no’…/I ain’t got the time…/I’m not gonna spend 10 weeks/Have everyone think I’m on the mend.”

The knowledge of her death hangs over the new documentary Amy, compiled from a wealth of footage going back to her teenage years. It’s not hard to see why friends and family wanted to put her on camera: a small woman with a big head, bigger hair, and dramatic features (usually exaggerated by Latin-influenced makeup), she dominated any room she was in.

And even in the earliest footage we see of her, as a 14-year-old striking out on her own, she is clearly ferociously talented. Her initial ambition is to be a jazz singer in clubs—hardly a path to stardom, but that’s fine by her. An able guitarist and a distinctive writer, she would inevitably have been a star even at that less profitable level. But her interests expanded along with her opportunities as she and her collaborators developed a new sound incorporating a wide range of soul influences.

Knowing how her sad story ends, we watch the footage compiled by director Asif Kapadia in search of a villain to blame. Was it her husband Blake Fielder-Civil, a club kid who many accuse of introducing her to hard drugs? Was it her father, who oversaw her finances but didn’t pull the plug on her behavior? Was it the media, who delighted in charting her outrageousness and happily turned against her when it got out of control?

You can blame who you want; many of the people in the film are eagerly talking to the press now, trying to “correct” what they see as its limitations and omissions. It’s true that a collage like this tends to overbalance on the side of the story that exists on film and ignore the parts that aren’t. And even in a film that runs a bit over two hours, you wish there was more performance footage—some complete songs instead of chunks. If there’s a conclusion to be drawn, it’s simply that Winehouse’s talent came from the same part of her soul as her demons, a conundrum that she didn’t live long enough to reconcile.

Vera Brittain’s 1933 memoir Testament of Youth had the same kind of impact in her native England that All Quiet on the Western Front had on the rest of the world. Both concerned the horrors of what was then known as the Great War, for those who fought in it as well as for those left behind. That the same international struggle was also known as the war to end all wars—but only until we did it all again barely two decades later—is not something that gives you a rosy view of the nature of man.

In the new film produced by the BBC and directed by James Kent (The Thirteenth Tale), we follow Brittain (Alicia Vikander) from her days as a teenager 100 years ago, whose only worry in life is to be able to attend university, something her middle-class father considers a waste of money. She wants to lead a literary life just as much as she wants to remain with her beloved brother Edward (Taron Egerton). Though she swears she will never marry, love finds her in the person of Edward’s classmate Roland (Kit Harington). Life seems to be taking its course until war breaks out. The young men are eager to enlist—“How many other generations get the chance to be involved in something like this?” one asks. In 1914, everyone thinks the war will be over in no time: “Home by Christmas” is the popular sentiment.

Primarily concerned with Brittain’s narrative, Testament of Youth contains no battle scenes, only shots of young men miserably huddled in wet trenches listening to gunfire. As the war takes its toll among everyone she knows, Brittain becomes a nurses aide and is stationed near the front, where she is assigned to tend to German soldiers, who suffer as much as the British boys but die without even the comfort of having someone to understand their dying words.

Grim but not unwatchably so, Testament of Youth at times seems redundant: Despite its emotional impact, do we really need another film that tells us war is bad? I thought that for a minute as the end credits rolled. Then I thought of how many public figures want to send American soldiers back to fight in the Middle East, only a few years after our last wasted effort there, and I realized that you can never have too many movies on this subject.

There’s a scene involving Adam Scott and Jason Schwartzman, two of the stars of The Overnight, that I’m pretty sure has no precedent in the history of movies, at least not involving name actors. The closest I can think of is the wrestling scene between Alan Bates and Oliver Reed in Women in Love, but after you see this movie you’ll never watch that scene the same way again.

A comedy with mumblecore influences, The Overnight joins two couples for an extended evening’s visit. Alex and Emily (Scott and Orange Is the New Black’s Taylor Schilling) are newly transplanted  to Los Angeles from the Northwest. They’ve been having trouble making new friends, so they happily accept a dinner invitation from Kurt and Charlotte (Schwartzman and Judith Godrèche) when they meet on the playground where their sons met. What transpires is a subversive comedy, sometimes too self-consciously so, about modern fears, social expectations, and freelance labor. It plays as if it were written in filmed in little less time than it takes to watch it (and that’s less than 80 minutes). I can’t guarantee that you’ll like it. But you probably haven’t seen anything else like it.