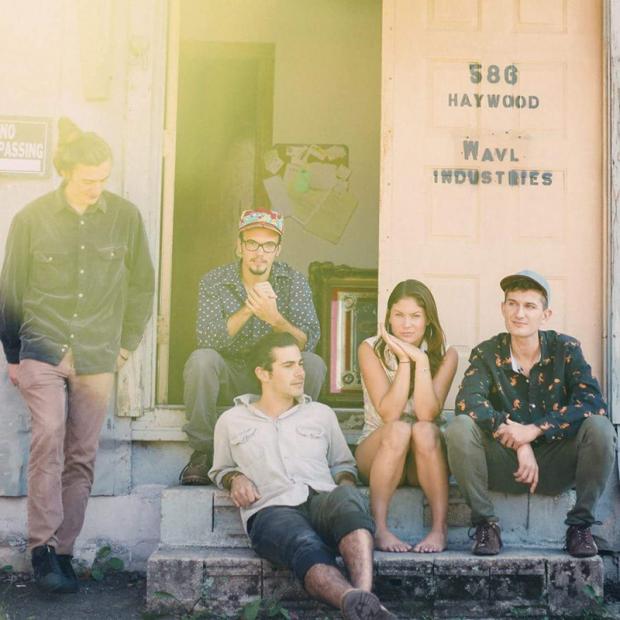 Buffalo’s first Cobblestone Live! Music Festival is coming up quick, and will feature 35 bands and artists from all over the place. Amongst the lineup is Midnight Snack, an indie pop band that mixes eclectic sounds with a ton of cool instruments. Originally forming in Boston in 2014, the band is now based in Asheville, North Carolina.

They’re an impressive group of musicians, most of whom attended Berklee College of Music in Boston. Brothers Jack Victor (vocals and drums) and Mike Henry Johnson (guitar and synth) formed the band in college. During their time at Berklee—playing a ton of music, getting into “silly stuff,” and writing often—they met Zack Kardon (guitar) and Pete Brownlee (bass). Jack shared with them some music he’d written with Johnson, and the band solidified from there. Shortly after, Katie Richter joined Midnight Snack to record The Times. Originally from East Aurora, Katie sings and plays trumpet. Jack describes her as an “essential component” of their sound.

Victor describes their most recent record, Child’s Eyes, as “more upbeat, low-fi, and funky at times, with very personal lyrics.” They recorded it themselves in their own space, experimenting with new sounds and arrangements. This is quite the opposite of their 2014 album The Times, recorded at Studio 101A in New Hampshire by friend Tom Holmes over a quick two-week span. “A total recording binge,” Jack called it. Stylistically, the two records are quite different, really showing off their tastes and influences.

“Our music continues to transform right alongside us as we transform as people and our interests change,” Victor says.

From an individual standpoint, the vocalist says: “As I grew up, my dad was always listening to music and especially played a lot of Bob Marley and Talking Heads, so I think that combination helped to shape me as a singer.”

The band lived for a while in a shared house, in which they constructed their own studio.

“It’s a blessing and a curse living with the people you work with. After six years of us all for the most part living together we recently moved into separate houses. It doesn’t seem to have affected how we function as a band though, and we all still basically see each other on a daily basis,” Victor explains.

From a songwriting perspective, Victor shares some details on this aspect of their music: “I usually start with a sketch of a song—lyrics, melodies, chords, and rough ideas for the groove—and bring that to the rest of the band and we flush out the arrangement for the song as a group. Everyone brings their own piece to it and it transforms. Sometimes all of the pieces just fall into place. Sometimes we keep tweaking an arrangement for months and it never feels right.”

Midnight Snack has been playing a ton of shows recently, most of which are down south. They’ll be in Buffalo soon, an exciting reality mostly for Richter as a Buffalo native.

“I can’t tell you how incredible it is to play in Buffalo. The amount of hometown support is overwhelming! I love seeing all the ways Buffalo has changed over the years. Every time I come home there is a new pocket in the music and arts scene. It’s so inspiring to see a grassroots approach to music in our city. Cobblestone Live is a great example of that.”

She goes on to describe their live shows: “I would describe our live performance as introspective yet dynamic. There are more instruments than people on stage.”

They’ll be playing with some great bands of all really different genres and styles, including indie rock band Real Estate—and many of them are Buffalo-based too, including Super American and Mom Said No.

Of the lineup, Victor says, “We’ve played with Moon Hooch several times and they are such a blast. Such an amazing live show. I’ve never seen Real Estate before but I’m really looking forward to it. For anyone wondering which other bands to check out—Upstate Rubdown and Dreambeaches—they’re both awesome New York-based bands.”