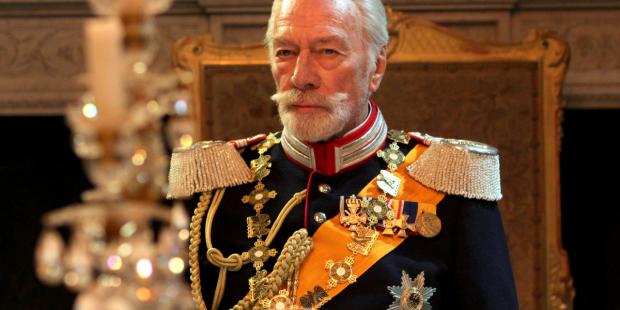 Hey, see if you can guess who this is:

Bombastic and impetuous, he sometimes made tactless pronouncements on sensitive topics without consulting his minister…sometimes brilliant, with a taste for the modern—technology, industry, science—but at the same time superficial, hasty, restless, unable to relax, without any deeper level of seriousness, without any desire for hard work or drive to see things through to the end, without any sense of sobriety, for balance and boundaries, or even for reality and real problems, uncontrollable and scarcely capable of learning from experience, desperate for applause and success—he wanted every day to be his birthday—romantic, sentimental and theatrical, unsure and arrogant, with an immeasurably exaggerated self-confidence and desire to show off, a juvenile cadet, who never took the tone of the officers’ mess out of his voice, and brashly wanted to play the part of the supreme warlord, full of panicky fear of a monotonous life without any diversions…

Of course, you all answered Kaiser Wilhelm II, right? Sure you did. That’s from the Wikipedia page about the last German emperor, most of it written by historian Thomas Nipperdey in 1992. But it decribes the current occupant of the White House with almost uncanny accuracy, down to the bit about being a juvenile cadet.

Christopher Plummer plays the Kaiser, living out the end of his life in exile in Holland in 1940, in the new historical thriller The Exception, a British-Belgian co-production. It was probably filmed two years ago, so it’s pretty unlikely that anyone involved made the comparison that is so obvious today.

Still, once that link enters your mind, the movie keeps reinforcing it. As when one of Wilhelm’s Nazi handlers asks him, “Are you ready for your daily briefing?” and he airily answers “I think I will give it a miss.” Or when, while blaming his military failures in World War One on his generals, he refers to himself as “The physical manifestation of God’s will on earth.” He’s even obsessed with a young woman named Mika, played by Lily James, Downton Abbey’s Lady Rose. (Okay, she spells it Mieke, but that will fool no one.)

The octogenarian Wilhelm is past the age of acting on his fancies, but that suave Trumpian seduction style is on hand elsewhere. When Captain Stefan Brandt (Jai Courtney), the new commander of the former monarch’s Nazi guard, meets Mieke, his reaction is swift and unmistakable: “Take your clothes off, please.” Amazingly, this technique works, and for a few moments it starts to look like we’re in one of those 1970s movies about the sado-psycho-sexual histories of Nazis and their women. Or at least one of Paul Verhoeven’s Dutch war films filled with carnal cavorting. (It’s no accident that so many of Peter Greenaway’s films were made in Holland. But I digress.)

Freely adapted from Alan Judd’s novel The Kaiser’s Last Kiss, The Exception is the kind of historical adaptation the British excel at, resulting in so many recent television series that keep people glued to Netflix and Hulu. Wilhelm holds out hope that the monarchy will someday be restored to Germany, which is why he tries to stay in the good graces of the Nazis and not throw his lot in with the British. Captain Brandt has had some career failings and needs to restore his reputation; his assignment is less to cater to the Kaiser than it is to spy on him. And only an awful dunderhead would assume that Mieke is nothing more than a comely chambermaid tossed into the plot to assuage Brandt’s animal urges (ignoring the house rule that “Copulation is strictly forbidden among the staff”).

At this point I have to admit that The Exception isn’t as silly as I’m making it sound. You have to overlook its historical inaccuracies and implausibilities, of course, but don’t you always? Wilhelm probably comes off better than he deserves to (historians are still arguing about him), but as written he gives Plummer a chance to roll out his full range of acting strengths. And just when you might be starting to worry that the movie is glossing over the fact that those Nazis were pretty bad guys, along comes Eddie Marsan as a deceptively soft-spoken Heinrich Himmler, whose idea of dinner chat involves describing an experiment in eugenics that leaves the rest of the table speechless.